Bangkok’s Contested Urbanism and The Right to The City 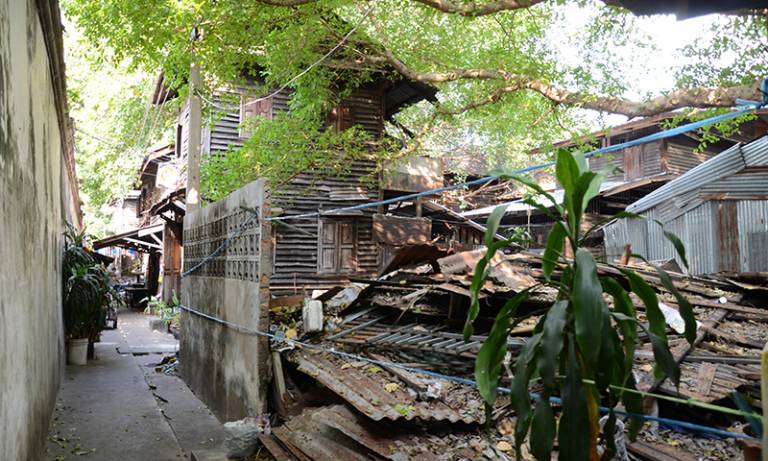 “This is our home, and we will stay…”

Bangkok’s Contested Urbanism and The Right to The City

This event will be following one particular case of a Thai community eviction and resistance in a historical area of Bangkok (commonly known as Rattanakosin Island). Pom Mahakan community, one of the oldest wooden-house communities, has been constantly under threat of eviction from the local authority - Bangkok Metropolitan Administration (BMA). The community has been fighting and resisting for more than 25 years, whereby the BMA had enacted in accordance to the Rattanakosin Conservation Master Plan, in turning the land into a public park, and relocating the community to the outskirts of the city. According to this Master Plan, it will not only be showcasing the national heritages and highlighting the old royal centre of Bangkok, but will also accommodate the touristic gaze and aesthetically pleasing well-ordered landscape.

Although Pom Mahakan community do not legally own this plot of land, but the first generation of community formation and the land occupation dated back to the early period of the 19th century. Despites numerous pleas and petitions from academics and the public, BMA insisted on and has been actively pressing, demolishing, and clearing the houses from time to time. As a result, some of the 100-years-old wooden houses were demolished during 2002-3, which made some of the community residents left to live elsewhere. Recently, since March 2016 up until last April 2017, about 20 houses were demolished, and now with the total number of 33 houses remaining.

In the panel discussion, by taking Pom Mahakan community as a point of departure, the speakers will be sharing their views and experiences in relation to this paradoxical phenomena of urban ‘development’ and ‘conservation’, where the local authority and the people are at the heart of such contesting urbanism. Also, other similar cases of community resistance/struggle or successful communities/cities from elsewhere, as well as the concept of ‘The Right to The City’ would be brought into the discussion.

17.15: Film screening of BeHide the Wall (An award-winning short film about Pom Mahakan community resistance made by Aphiwat Saengphatthaseema in 2002, approx. 30 min.)

17.45: A panel discussion on ‘The Urban Heritage, Community Resistance and The Right to The City’