The Rise and Fall of Urban Economies 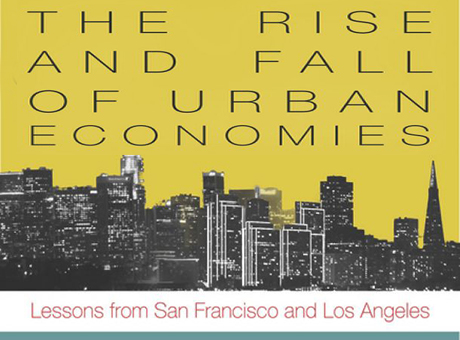 This path-breaking book co-authored with world-renowned economic geographer Michael Storper, Tom Kemeny and Taner Osman, is written as a detective story in search of the root-cause behind the income divergence of two highly advanced and successful California regions. It begins its ‘whodunit’ line of enquiry by approaching the question through the lenses of several mainstream economic schools of thought, such as regional science and urban economics, international development and economic geography, convincingly demonstrating their shortcomings in explaining why the San Francisco region essentially ‘won’ the new economy, and why LA has fallen significantly behind.

A more fruitful investigation through in-depth industrial case studies and theoretically informed methodologies from fields such as political science and economic sociology points to very distinct social, cultural, relational and political contexts. They explain why abundant and comparable break-through innovations, robust action, start-ups and spin-offs developed into globally-leading firms and industrial clusters in the Bay Area, with little spillover and negligent snow-ball effects in LA. The authors argue that economics and society interact in important and meaningful ways that ought to be considered in regional economic analyses.

The book is available from GoogleBooks; Stanford University Press; Amazon

The book has also been reviewed in SFGate by Jon Cristensen (adjunct assistant professor and journalist in residence at UCLA’s Institute of the Environment and Sustainability):  http://www.sfgate.com/books/article/The-Rise-and-Fall-of-Urban-Economies-6511749.php