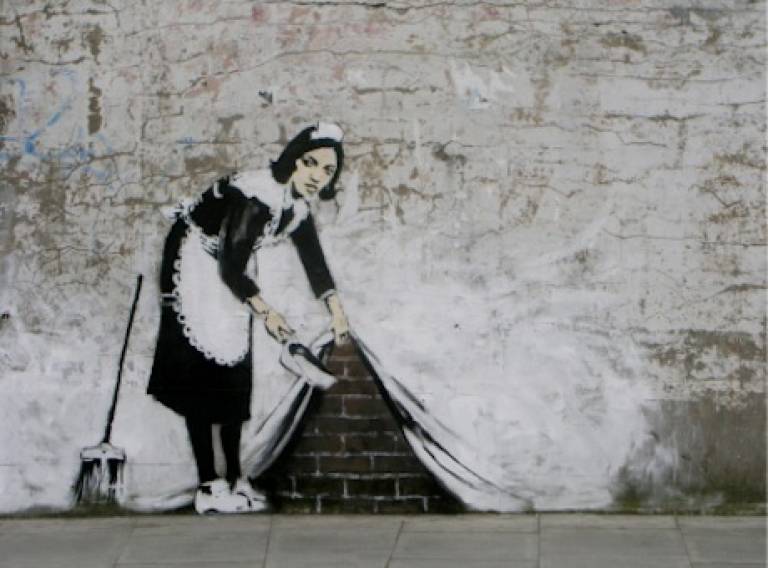 'Sweep It Under The Carpet'. Work by graffiti artist Banksy

This working paper analyzes the relationship between gender, citizenship, and poverty by examining the structural discrimination of international domestic work(ers). This type of work is problematic in many ways, in particular its devaluation in terms of social standing, low remuneration, its relegation to the ‘private’ sphere and its association with ‘feminine’, and thus less valuable, work. This situation is exacerbated in the context of a lack of citizenship or second-class citizenship, in which domestic workers may not be entitled to the same legal and social protection. Divided into five chapters, this paper establishes a theoretical and analytical framework that lays the groundwork for an argument that the exploitation of domestic workers is a political act that reproduces and perpetuates patriarchal hegemony. This act occurs through, and is reinforced by the historical and persistent misrecognition, maldistribution, and misrepresentation of domestic work(ers).

The discrimination and devaluation of domestic work is not a natural occurrence, but a result of social, political and economic processes in which all participants (the employers, employees, policy makers, law enforcement, and society in general) are complicit. Finally, this paper examines two case studies of resistance in which domestic workers confront and demand changes to their current circumstances of discrimination and lack of social and legal protection: the first in the New York, USA with the National Domestic Workers Alliance, the second in India with the National Domestic Workers Movement. These movements bring the discussion of domestic work in the public sphere, not simply as an issue of low pay, but to gain recognition that their social inequalities are an issue of social justice.