The current 'refugee crisis' in Europe and the heated debate over spatiality's of migrations and its control. 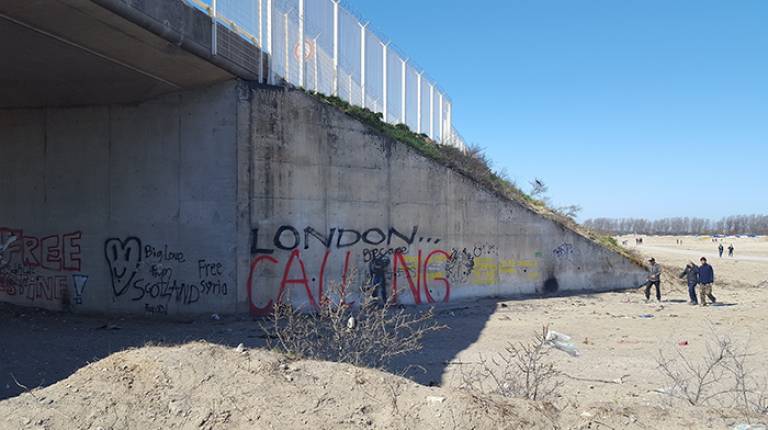 Border and camp studies have recently attracted a great deal of international attention: researches and publications have proliferated, shaping a very extensive body of knowledge. The arguments in connection with borders and camps are far from being exhausted. Nevertheless, there is the need to (re)organise the wealthy of knowledge produced so far, in order to gain a holistic vision of what has been produced, what are the unexplored areas, to better situate the future research against the background of the state of art.

Building on a review of the existing literature, as well as on primary data from Calais and Dunkirk, and reflections emerged during a public debate around Space, politics and imperfect citizenship, the research aims to consolidate and advance the work and research on borders and camps that has been developed at DPU so far.

The research is supported by the urban transformations and the diversity, social complexity & planned intervention research clusters

Makeshift camps, created in various and dynamically changing locations across Europe (near and within cities, ports, forests, borders), have become an integral part of the so-called current refugee crisis. Amongst these, the Jungle refugee camp in Calais, northern France, has become an internationally recognized hotspot, attracting media attention due to its proximity to the Eurotunnel and the conflictive relations between the refugees and the French authorities. These reached a climax at the beginning of this year, with brutal evictions, the bulldozing of nearly half the camp, and multiple legal confrontations between the local prefecture and the organisations cooperating and resisting in place (NGOs, volunteers, activists).

As part of the research on Borders and camp, we visited Calais and Dunkirk in April and met representatives of several organisations actively running and operating different activities in the Jungle and Grande-Synthe. These included members from l'Auberge des Migrants, Help Refugees, Care for Calais, La Vie Active and Médecins Sans Frontières. We are grateful for the workers and activists of these organizations for dedicating us part of their limited time and for sharing their experiences with admirable honesty and introspection, from which we have gained invaluable insights.

Out of the preliminary visit in April 2016, which included an exploration of the camps as well as detailed conversations with the aforementioned groups, several elements emerged that will inform our research agenda and future development. The first is the understanding of the continental scale of the current migratory wave. The camps we visited in Calais and Grande-Synthe are not isolated camp realities but rather part of a fast evolving geography of heterogeneous camps spanning across European borders. Second, the heterogeneity of the multiple practices of humanitarian aid in place, ranging from small activist groups to international professional organizations, with different strategies and levels of specialisation.

Blog - Life at the edge: reflecting on Calais, borders and camps

This years BUDDcamp explored the work of the SPRAR programme, led by the Local Democracy Agency (LDA) Zavidovici in Brescia. The programme works with refugees, assisting them to achieve progressive autonomy, as they integrate and adapt to a new city. Students explored how the city’s design and urban planning processes can help to hinder or facilitate integration. Student’s present their findings, offering a personal journey towards understanding their role as an urban practitioner in designing for social-spatial justice.

Space, politics and imperfect citizenship. A debate on migration policy and forms of life at the edge of Europe.

With an increase in forced migration, territorial tensions have risen across Europe, altering political and spatial discourses. A fast evolving geography of unregulated and partially regulated camps has become a phenomenon grounded inside and around the edges and borders of the continent. With refugees becoming integral to debates around human rights, citizenship and biopolitics, the territorial and extraterritorial borders of Europe stand as heightened regions of contest. This debate is centred around the territorial implications currently at play, particularly the space and politics behind European migration policies and treaties, the humanitarian/activist response to the migratory wave, and the larger implications on the formation of camps as an increasingly recurrent spatial solution.

Nando Sigona (Institute for Research into Superdiversity, University of Birmingham);

Isabelle Risso-Gill (Save the Children);

The politics of the 'refugee crisis': Four renderings - Nando Signora

from Space, politics and imperfect citizenship. (30'')

The politics of the 'refugee crisis': Four renderings