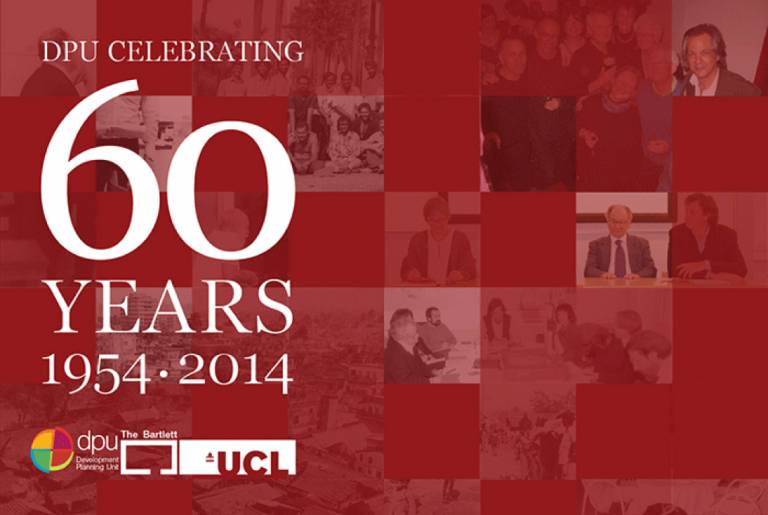 The DPU hosted an international conference between 2 and 4 July 2014. The conference was attended by over 200 people and featured speakers across 8 sessions. A summary of proceedings can be viewed on the dpu blog, and podcasts of all of the sessions are available to listen to/download.

Thinking Across Boundaries: Planning dilemmas in the urban global south

Initiated in 2013 with support from UCL Grand Challenges/Sustainable Cities, this project interrogates the continued significance of notion of the ‘urban global south’ and the implications for urban planning theory and practice. It does so through a series of interviews with our peers working across the globe, compiled in two films. The first was launched at a panel discussion in August 2013 at the Royal Geographical Society (with the Institute of British Geographers) Annual International Conference.

Throughout 2014 there was a series of ‘Dialogues’ between DPU staff and selected international academics and practitioners. All of the events have been recorded and are available to watch or listen to on YouTube (for videos) or Mixcloud (for podcasts).

Sixty Years of Urban Development: A Short History of the Development Planning Unit

Building on the booklet produced by Emeritus Professor Patrick Wakely for DPU’s 50th Anniversary, we are producing a new booklet to celebrate our 60th year. Sixty Years of Urban Development: A Short History of the Development Planning Unit adds to the 50th Anniversary booklet, reporting on the chronological progress of the DPU from 1954 to 2014, the principal intellectual and conceptual ideas that have influenced the DPU’s activities in the field of urban development, and the major international events and declarations which DPU has been a part of and to which it has responded. The booklet was disseminated at our DPU60 Conference and is now available view (Issuu).

Find out about DPU's history in Sixty Years of Urban Development: A Short History of the DPU (Issuu)