Launch of the Living Stone 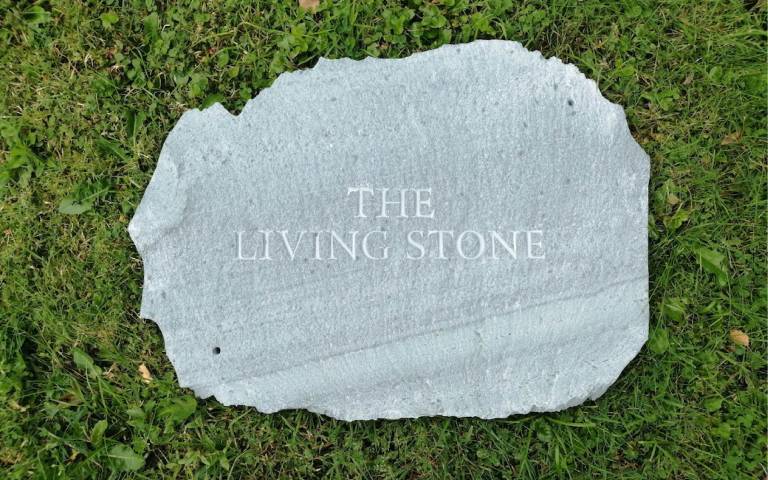 Launched on Thursday 17th October, The Living Stone is a digital poetry installation across three of the former homes of William and Dorothy Wordsworth: Dove Cottage, Allan Bank and Rydal Mount.

The Living Stone has been created by artist Leah Lovett with Duncan Hay, Martin De Jode and Andy Hudson-Smith from the Bartlett Centre for Advanced Spatial Analysis, University College London in partnership with the Department of English and Creative Writing at Lancaster University, the Wordsworth Trust, the National Trust and Rydal Mount.

The Living Stone is a digital poetic walk which encourages people to engage and reflect on the different ways about which the Lake District has been written. Distributed around the woods and gardens of Dove Cottage, Rydal Mount, and Allan Bank are a series of slates engraved with bird names. If you send these names as text messages to 07858 382 728, you will receive a line of poetry in return. The poems combine material from the notebooks and poems of William and Dorothy Wordsworth with contemporary sources. The words of fell runners, walkers, aircraft warnings, weather forecasts, and the hum of social media combine with the voices of the past to create new reflections on the way in which words have shaped one of Britain's most significant landscapes:

' This large house,
With its CONCENTRATION OF BIRDS
And smoky chimneys’

‘For these two days
we have again had
Sunshine, raincloud
Layers and pea soup views.’ 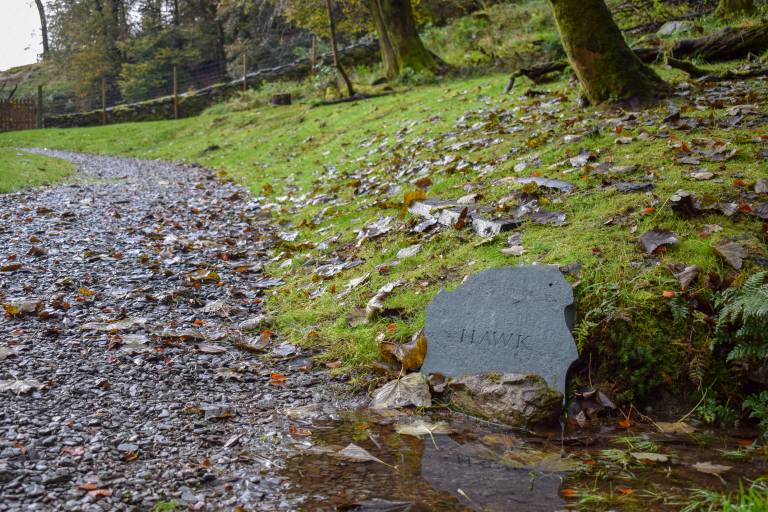 Leah commented “Handling Dorothy’s original Grasmere journals, what struck me was the intimacy of the connection to the environment. It’s not just her observations of the orchard garden and surrounding mountains that are so evocative; it’s the hand-laid paper scrawled with words that are rusting because the ink was made from oak galls and iron sulphate. The landscape materially shaped the Wordsworths’ writings, and their writing has shaped the landscape too. Walking around Grasmere and Rydal, I became aware of experiencing the area through poems like ‘To Joanna’ (from which the title of this work is taken). With The Living Stone, I wanted to reflect on the nature of that relationship, bringing together engraved slate from the region with digital communications technologies to explore how language interacts with places like the Lake District to frame the ways in which they are experienced.”

Harvey Wilkinson, from the National Trust said “The National Trust at Allan Bank is delighted to be involved in this project. It’s a thoughtful – and thought provoking piece
which prompts us to take a few minutes to think, not only about nature, but about the multiple voices and narratives that populate places like Grasmere; William and Dorothy Wordsworth, the call signs of fighter jets, and the buzz of social media. At Allan Bank the stones are placed in deliberate pauses for thought built into the landscape by its owners in the 19th century; a small dipping well by the garden, and higher up, a more sublime rocky seat; a place to take stock of the view.

It is also great to be joined-up with two others in the small constellation of houses that were the Wordsworths’ homes, and especially Dove Cottage. Next year the National Trust celebrates its founding 125 years before – and in the Lakes, one of its founders, Canon Rawnsley. He also lived at Allan Bank – and also founded The Wordsworth Trust, our close neighbours in the valley. Like much of the Lakes, Grasmere is a place of interlocking and shared significances, and these stones offer a quiet reflection in that subject.”

The Living Stone has been funded as part of the ESPRC PETRAS project, which is researching the social and technological implications of the Internet of Things.

Text messages will be charged at your standard network rate. Your phone number will not be stored or used for any other purpose. Information about the project and a map of the Living Stone sites will be available for free in each of the project venues. Standard admission prices will apply at Allan Bank and Rydal Mount.