London Bridges Interactive was developed under our EPSRC Public Understanding of Science project. It was designed to be part of the Museum of London's development of bridge exhibits relevant to their series of mini-exhibits focussing on the built form in London. The aim was to communicate the location and design of key bridging links across the River Thames in a form applicable to as wide an audience as possible making it both informative as well as entertaining. We used this project to advanced our skills in issues that are central to maximising effective public consultation. 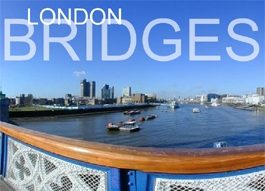 The exhibit was first shown as part of the Museums 'Bridging History' Exhibition held from 17th March until 14th May 2000 as part of their Capital Concerns series. The exhibition was designed to capture the evolution of bridges, their architecture, and their social function over a period of 400 years and was focused on the topical event of the opening of the Millennium Bridge in June 2000.

A particularly innovative feature of the exhibit is the idea of using 3D interpolation and rendering on old paintings of London's bridges thus bringing 'art to life' in a way that gives a strange mystical quality to the scenes. Some of the techniques are also used in our Hackney Building Exploratory Interactive work and in the Woodberry Down Regeneration project.