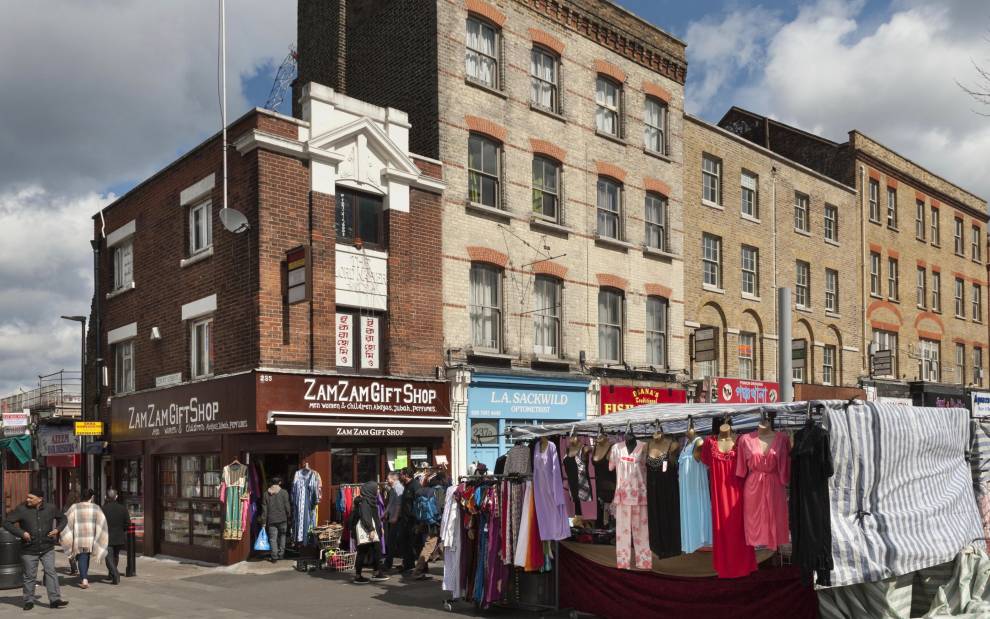 In 2016 the Survey of London launched an in-depth study of Whitechapel‚ the inner fulcrum of London’s East End and a district with a long and multifaceted history. For this project the Survey won a major grant from the Arts and Humanities Research Council to break new methodological ground in collaboration with the Bartlett’s Centre for Advanced Spatial Analysis.

The Whitechapel project created an interactive website for public co-production of research‚ working with local communities and others to document experiences and understandings of all manner of buildings and places. Whitechapel’s histories and circumstances made it an excellent testing ground for the formation of such a history. Tower Hamlets Local History Library & Archives was another partner in the initiative and support came from Historic England, the East London Mosque‚ the Whitechapel Gallery and Wilton’s Music Hall. The project has also resulted in a major publication, with Volumes 54 and 55 of the Survey of London’s main series published in June 2022 by the Paul Mellon Centre for Studies in British Art.

The Whitechapel area of study extended from the Royal London Hospital and Brady Street (north and east) to Wellclose Square and Mansell Street (south and west). At its centre was Altab Ali Park, the site where a ‘white chapel’ was built in the late thirteenth century to serve London’s growth out from Aldgate. A parish of more than 200 acres had been formed by the 1320s when the chapel was replaced with the Church of St Mary Matfelon. Rebuilt twice more in the 1670s and 1870s, this place of worship was destroyed in 1940. The churchyard was made a park that has been dedicated to the memory of a local Bengali murdered in a racist attack in 1978. A Shaheed Minar (martyr’s monument) replicating an original in Dhaka was erected in 1999.

Immigration has for centuries been a primary historical fact in Whitechapel, embracing in particular German, Irish, East European Jewish and Bengali settlements. Ribbon development spread along the busy and mercantile High Street to Whitechapel Road where the long-established Whitechapel Bell Foundry moved to its present site in the mid 1740s and, further east on what was then London’s outer edge, the Royal London Hospital settled in the 1750s. By the 1690s southern parts of the parish were being developed on the Leman Estate in Goodman’s Fields and at Wellclose Square where there stood a Danish Church. German immigration, largely stimulated by work in the area’s sugar refineries, was provided for by St George’s Lutheran chapel on Alie Street, surviving as a little-altered building of the 1760s, as well as by St Boniface’s Roman Catholic Church which was artistically rebuilt in 1957–60.

From the 1880s Jewish immigration boomed and synagogues grew numerous. The former Great Synagogue on Fieldgate Street is a solitary survivor in Whitechapel. Poverty was acute and in a severely overcrowded area (tarred by association with Jack the Ripper) hostels grew numerous. Toynbee Hall was established as a centre for education and social work. This led indirectly to the building of the Whitechapel Gallery in 1898–1901. Wilton’s Music Hall, a remarkable survival, had been squeezed in near Wellclose Square in the 1850s. On Leman Street and Prescot Street the Co-operative Wholesale Society built with solid magnificence from the 1880s to the 1930s. The Freedom Press, the oldest anarchist publishing house in the English-speaking world, has been based in more discreet Whitechapel premises since 1942.

The East London Mosque, established in 1941, moved to Whitechapel Road in the 1970s. It is London’s biggest mosque and part of a larger and growing complex that includes the London Muslim Centre. The spread of the City, arrival of a Crossrail station and other development pressures have recently given parts of Whitechapel an entirely new, glassy and much taller character through speculative developments that include Aldgate Place, Altitude Point, Goodman’s Fields and Royal Mint Gardens. 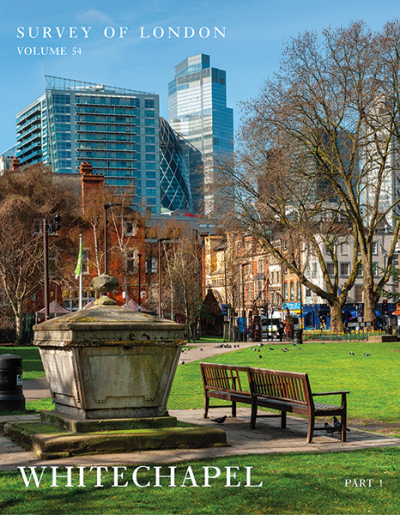 Survey of London, Volumes 54 and 55, Whitechapel, edited by Peter Guillery and published in 2022 by the Paul Mellon Centre for Studies in British Art. Link to the volumes on Yale Books.