The History of the Survey of London 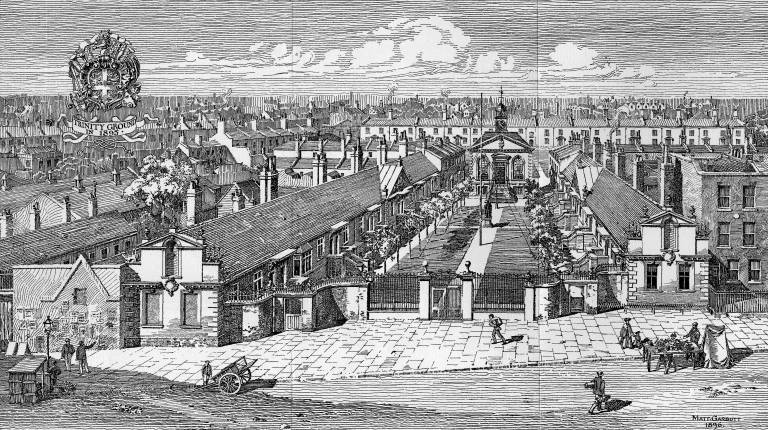 The Survey of London is a venerable collective project, begun in 1894 with a strong commitment to advancing public understandings of London’s built environment. The Survey was based in London governmental bodies and heritage quangos until 2013, when it became part of the Bartlett School of Architecture at University College London.

Prompted by the unwitting demolition of a Tudor hunting lodge in Bromley-By-Bow for a new school, the Arts and Crafts architect, designer and social reformer Charles Robert Ashbee set up a committee for the Survey of Memorials in Greater London in 1894. The first publication was a monograph devoted to Trinity Almshouses on the Mile End Road. It interwove architectural and social history and helped prevent demolition. Ashbee thus initiated a London-wide register of buildings of interest to bring together photographs, measured drawings and historical notes. It was not only the loss of London’s historic and everyday fabric that distressed him, but also its degeneration into a commodity, without meaning for ordinary people. He saw old buildings through a philosophy of ‘social enlightenment’: they had the potential to educate and thus to enhance the lives of Londoners, like libraries or museums. Ashbee understood that survey is a matter of bearing witness, of providing evidence. One of its great virtues is that it can be laid down for posterity.

Ashbee was acutely conscious of the social value of architecture and cultivated a strong link to the East End. His Survey committee’s first volume to cover a whole parish, published in 1900, was an account of Bromley-By-Bow. It already benefitted from the auspices of the London County Council (LCC), a link that was to endure. In its introduction Ashbee expatiated about the mission:

‘The greatest city of England – of the whole world – should not only look to the preserving of her historic record, she should go out of her way to see that immediate, that short-sighted considerations, whether public or private, should not intrude themselves.’ ‘We plead that the object of the work we have before us, is to make nobler and more humanly enjoyable the life of the great city whose existing record we seek to mark down; to preserve of it for her children and those yet to come whatever is best in her past or fairest in her present . . . and to stimulate amongst her citizens that historic and social conscience which to all great communities is their most sacred possession.’

Through the twentieth century a great deal of ground was covered, authoritative histories in forty-four more parish volumes and sixteen more monographs. From its initial inventories the Survey moved to a more contextual approach and in doing so achieved and has maintained a first-class reputation for scholarship aimed at the general public. At the same time the work is indispensable to architects, planners and other built-environment professionals. In covering a range of subjects, such as Victorian houses, building methods and finance, and London’s docks, good drawings have always been central. The books have steadily evolved, reflecting technological, academic and wider cultural developments, but clarity and readability have always been absolute priorities.

Responsibility for the Survey passed from the LCC to the Greater London Council in 1965, and upon the abolition of that body to the Royal Commission on the Historical Monuments of England in 1986. Institutional merger in 1999 brought the Survey under the purview of English Heritage where it remained until 2013.

The Survey’s detailed investigations do take time, and even after 126 years a good deal of the map remains untouched. As the great architectural historian Sir John Summerson said, ‘The Survey will never be finished. If the time comes when a final “coverage” seems to be in sight it will be time to begin again. London changes. So does the writing of history. The Survey as the continuing illustrator and expositor of the fabric of London has a function with no imaginable term.’