An ecomorphic design should act and react according to its occupation, so that the environment and its inhabitants form an ecological whole. 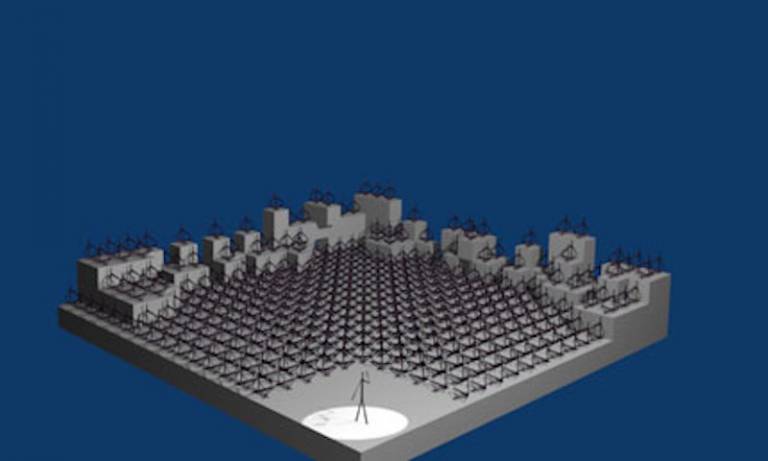 An ecomorphic design should act and react according to its occupation, so that the environment and its inhabitants form an ecological whole.

The research brings together theories of autopoeisis and ecological perception. A program has been written for the PC which demonstrates the idea. In it, agents that represent people walk up to and interact with artworks. Artworks that are not viewed pick themselves up and relocate to a new position. However, when they do so, a new wall is built behind where they stand, so the configuration of the space is changed.

The theory is explained in more detail over several papers:

In this paper we explore the use of an animat model to construct geometry. The model uses agents guided by direct (or active) visual perception of their environment to replicate human behaviour within a notional plan of an open space. The environment reacts to these agents by placing walls in order to affect their usage of the space, and thus the structure may be evolved to fit the social function of the agents within it.

Here, we start with the most basic social function, to design a building that disperses agents programmed with an exploratory task across its floorplan by using an evolutionary algorithm. We investigate the effect of evolution on the generated configuration using space syntax tools. We show how the introduction of a simple rule, the desire to leave, can result in the evolution of commonly observed features --- first a central axis and then a 'foyer'. We discover that 'intelligibility' of the space, which might imply reduced cognitive load, may increase as the system is allowed to evolve. Finally, we consider the implications of the ecological approach for the design process.

Space syntax has shown itself to be a useful analytic tool, but until now there has been little advance in the application of space syntax to generate environments. While there have been theoretical advances in knowledge about how urban environments come to be constructed, there has been little concentration on how we might build a constructive tool. This paper addresses this shortfall by appealing to the biological theory of autopoiesis.

Autopoiesis is the process by which an organism maintains itself within the environment; we might propose autopoietic software agents that similarly maintain themselves within the artificial environment through natural movement. In response, the artificial environment may adapt to the software agent, moving services that the agents may use to more integrated or segrated locations, or by changing the relationship of the local to the global structure of the system in order to achieve intelligibility.

Here, several experiments applying these ideas about the structural coupling between agent and environment are demonstrated, showing how environments may be evolved to fulfil the natural movement process of agents. That is, moving towards artificial buildings and cities that are generated as an ecomorphic response to inhabitation, in the hope to both understand better the process of occupation and urbanisation, and to look to the future of building and urban design.

This short paper discusses modelling the process of ecomorphic evolution of an art gallery, which is built around the natural interaction, or hermeneutic dialogue, between people and artworks within it.

The natural interactions from the point of view of the person are those based on active perception of the environment, that is, based solely on possibilities that the environment affords to the person. In the model presented here, the possibilities of the gallery are to view the artwork on display, and agents with vision act out the part of the people. However, the artwork itself is engaged in a game in which it tries to place itself in popular rooms within the gallery, moving from location to location to achieve this. Around this visually coupled interaction between viewer and artwork, the walls of the gallery are formed and reformed according to the location of the players, in order to create a constantly evolving space in which the game is played: the ecomorphic dialogue of artwork and art viewer.