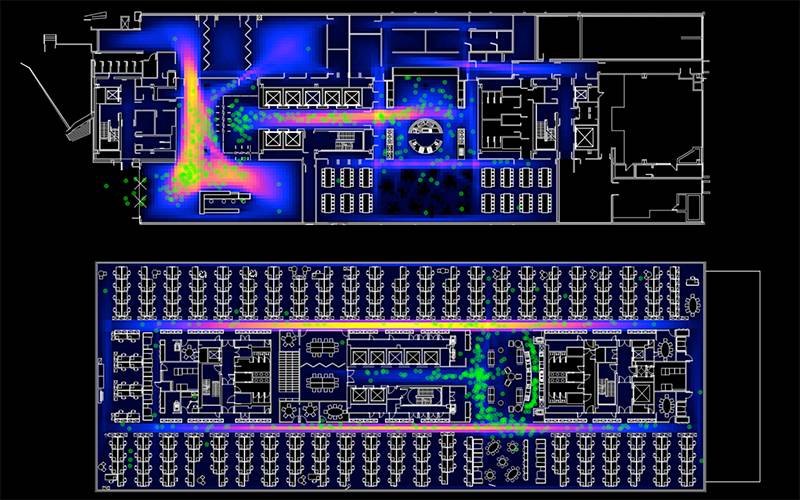 This PhD will develop a set of predictive models for space usage behaviours in offices, combining space syntax analysis techniques (VGA, agents) with the distribution of facilities and attractors to represent real usage patterns. Purely syntactical models fail to predict usage in offices accurately due to various reasons: the role of the entrance, the biased distribution of origins and destinations (essentially movement isn't random) and the influence of attractors (coffee machines, photocopiers, water coolers, etc.).

The architectural firm and consultancy practice Spacelab have over the last years collected a wealth of usage data from a range of case studies, which will be made available to this project. This will enable the development and callibration of different models using assumptions and various parameters (e.g. frequency of trips from and to attractors) to predict a variety of behavioural outcomes such as movement, occupancy, interactions, encounter, etc.

Since the available dataset includes cases across sectors (including law firms, the financial industry, advertising, media, technology companies, etc.), the models could be validated for different industries, taking into account typical workflows and predominant office cultures (e.g. the need for law firms to use enclosed meeting rooms for privacy purposes). The models could then be tested on new cases to validate its predictive power. The project will include programming of tools or plugins for Depthmap or other relevant software to contribute to the next generation of context-aware syntactical methodology. It will also engage with architects and interior designers to test how these models could be usefully integrated into the design process.

Petros studied Architectural Engineering at the National Technical University of Athens before graduating from Adaptive Architecture and Computation MSc at The Bartlett. Initially under a Knowledge Transfer Partnership (KTP) between Spacelab and UCL, and currently as a PhD student in the Space Syntax Laboratory, Petros is exploring patterns of human behaviour in office buildings and their relationship to the properties of space.

Petros is a Tutor on the Architectural Computation  MSc programme, teaching on the Introduction to Programming and Body as Interface modules. He is interested in spatial analysis through statistics and simulation, human-computer interaction, graphics and video games. He is also a regular contributor to the development of the open-source spatial analysis software depthmapX.