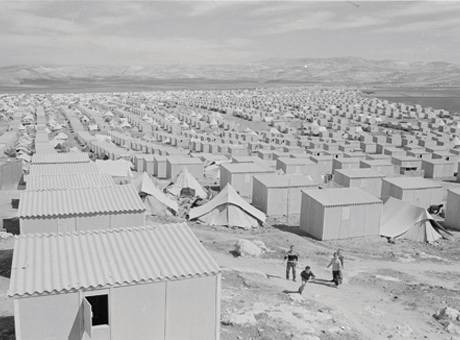 Spatial Violations: constructing the political inside the Palestine refugee camp

To spatially map the political inside the camp, the research starts by reinterpreting and representing in spatial terms an already well-­‐documented fact that the Palestinians underwent a gruesome, violent and political manipulation with the aim of resettling them and their political claim in the Near East countries.

The research further conducts an on-­‐site mapping of the spatial chronology in what shaped the Palestine camp as practice and material, beginning from the generic form — a defined 100m2 space of right-­of-­use—entitled to each refugee family, and a mode-­‐of-­practice — embodied in self‐support — enforced as an existential humanitarian necessity, tracing its morphology into what form it has become today.

Over 67 years of space-making has lapsed, and space has transgressed the demarcated 100m2 stripping the camp from its relief form and scale and reappropriating it as a truly Palestinian one. It is in this beyond the 100m2 where I claim the political resides in the camp-­‐space as form and practice, which is termed in UNRWA and government terms as ta’addi (encroach, exceed, violate, attack), and which I reinterpret as spatial violations.

Fieldwork interventions conducted in Baqa’a camp, Jordan and Burj el Barajneh camp, Lebanon, and based on the above hypothesis aim to spatially interrogate the political inside the camp today to be able to undress the spatial, and reveal the potential as it exists today in the Palestine camp.

Samar is an architect and urban specialist with 9+ years of experience in international development, including urban planning and development in conflict-areas.

In 2008, Samar moved to Jordan to work with the United Nations Relief and Works Agency for Palestine Refugees in the Near East (UNRWA), where she still holds the post of Architect/ Physical Planner in the Infrastructure and Camp Improvement Department at their Headquarters in Amman, Jordan. While at UNRWA, Samar was involved in supporting the 5 fields of operation (Jordan, Syria, Lebanon, West Bank and Gaza) with a focus on Camp Improvement, Shelter Rehabilitation, and Community Development and Participation.

Currently, Samar is conducting her PhD studies at the Bartlett School of Architecture, UCL where she is investigating the spatial politics of the Palestine refugee camp and its impact on the potential to self-­‐emancipation. Samar is also currently involved in documentary filmmaking, and has exhibited her photography in the US.