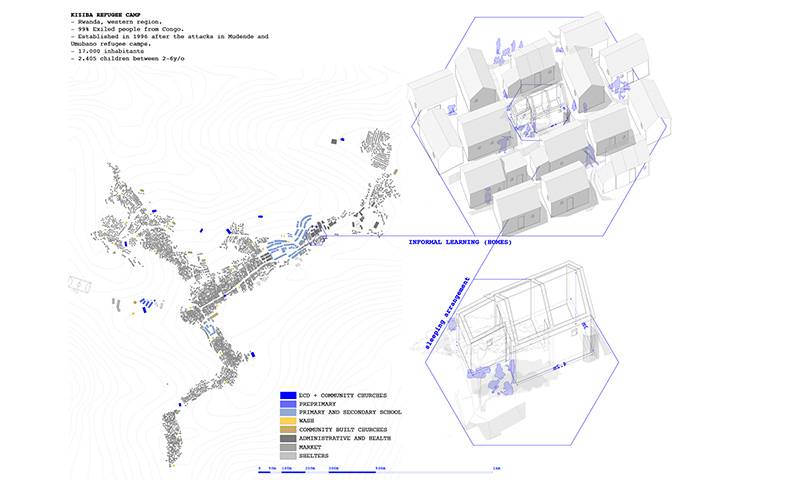 This research tries to unveil the amalgam of material and perceptions that make the encampments’ built environment a learning source for the young children that live in and around them. It elucidates how different populations affected by encampement are involved with, and swayed by, space and its creation process. Furthermore it hypothesizes changes within the learning assemblages if different elements are able to manipulate and act on them, namely the encamped populations and civil society. It aims to demonstrate that a more empathic, complex and subtler approach to understanding places of encampment as learning assemblages is needed for the betterment of encamped populations currently and in the future. Using architecture and the ANT method as laid out by Latour and Callou this research by architectural design will expand on the complexity that conform the places of encampment studied.

Encampment is used as a solution to exiled populations worldwide. Its materializations and reinterpretations in diverse geographies, times and contexts differ from each other. Nevertheless they are mostly studied, managed and produced under a simplified, linear, generalist and determinist framework. This constructivist, one-sided approach undervalues the agency and contribution of encamped populations and of the built environment. The dualistic view and approach between international efforts and local expectations/realities is visible in the materialization of the encampments’ assemblages, their built environment. Relief aid initiatives lack awareness of the complexity and agency of the built environments they work with, overseeing or downplaying cultural habits and preferences of those living in and around the places of encampment. This obviates consistently a critical element, the children, who account for more than 54% of the population in the encampments of Eastern Africa.

My aim is to learn from more than 5 years of professional and personal experience in Rwanda and Ethiopia, as well as from current and past efforts within Eastern Africa’s refugee encampments to construct a more subtle, kaleidoscopic and empathic understanding of them. I will portray the discipline of architecture as a tool to produce new knowledge and introduce variability to the learning sources of young children living in those situations.

The questions this research will thus address are as follows: How can design research be instrumental in the production of new knowledge of protracted refugee encampments? Which sociomaterial relations taking place at the encampments studied compose the learning assemblages that affect encamped young children? Which changes in the materiality of these learning assemblages will improve the learning processes of encamped young children according to the actors involved?

Nerea Amoros Elorduy is a Barcelona-born architect. She holds a BA in Architecture and Urban Planning from ETSA Barcelona and an MA in Sustainable Emergency Architecture from ESARQ. She taught Design Studio, Human Settlements and Visual Studies at the Faculty of Architecture and Environmental Design at the University of Rwanda, co-founded the architectural practice ASA Studio based in Kigali, and has completed several health and education projects in Rwanda and Ethiopia with emphasis in Community participation and post-conflict environments.

Nerea has exhibited widely, written and published articles in architecture and education, architecture in post conflict settings and social architecture in East Africa. Her PhD research by design reflects on her previous work and questions the role of space and the architect in the Early Childhood stimulation in Eastern Africa’s refugee camps, with a specific interest in the impact that architectural processes and products have in such a vulnerable ecosystem.