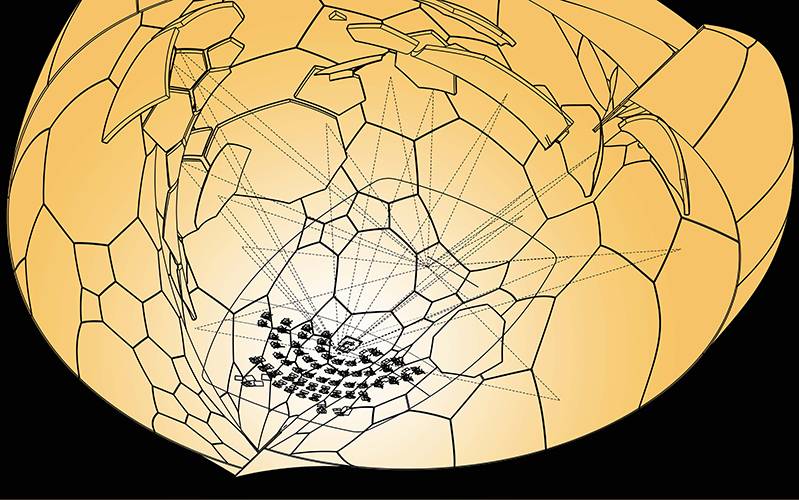 The relationship between music and architecture has been shaped over the millennia by a series of complex causal relationships between composer, musician, instrument, space, and the emotional responses of listeners. The sounds and spaces that arise out of these relationships form a continuity over time that has informed the way we listen to music and the way we design rooms to accommodate it.

However, the development of acoustic theory in the early twentieth century gave rise to a series of rigid conventions in acoustic design, affecting both musical and architectural composition, and considerably slowing down the mutual co-evolution of both.

This paper builds on this work by breaking down the concept of ‘music’ into digitally evolved sounds, and ‘space’ into an emergent virtual entity capable of adapting to a user’s emotional response. It follows two strands of investigation; firstly, the study of evolving sound in fixed space and, secondly, the evolution of space in relation to fixed music.

Using virtual auditory systems, bio-metric sensing, and evolutionary computation, this research deploys a new tool-set with which to optimise the development of our engagement with sound, space and emotional response. This paper reviews a series of tests on listeners that aims to accelerate the coevolution of sound in space, and space with sound.

Paul Bavister graduated as an architect from The Bartlett School of Architecture in 1999. His career began in restaurant and retail design and has since evolved to specialise in cultural projects; in particular acoustic and performance spaces.

Paul is currently a Senior Associate Director at Flanagan Lawrence specialising in Research and Development. Paul is an active member of sound art group Audialsense and has given lectures on the relationships between sound art and architecture at universities across London. Paul is both a design tutor and PhD Candidate at the Bartlett School of Architecture.

Image: Sequence no.3 in colour, by Paul Bavister