Two Bartlett students were awarded prizes in the prestigious competition which celebrates the importance of drawing as a tool in capturing and communicating architectural ideas. 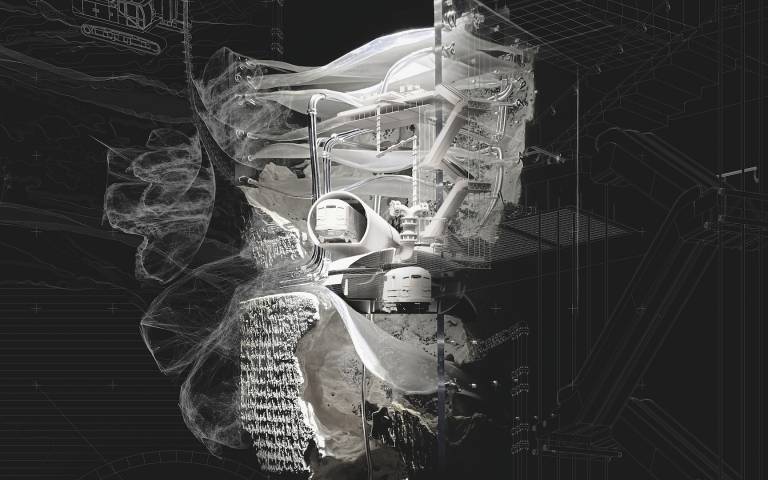 Launched in 2017 by Make Architects in partnership with Sir John Soane’s Museum and the World Architecture Festival, The Architecture Drawing Prize highlights the most imaginative and advanced work in architectural drawing and rendering, and encourages students and practitioners to reflect on drawing’s role in architecture and the built environment as an art form and a practical skill.

Entries are judged in three categories - digital, hand-drawn and hybrid. Dafni Filippa won in the hybrid category and was judged the overall winner of the Prize, with her entry, ‘Flood-responsive landscape performance’, a variety of rendering techniques, produced across multiple software platforms, to demonstrate a responsive flood-defence landscape. Dafni is studying Landscape Architecture MLA, in Design Studio 1, tutored by Ana Abram and Maj Plemenitas, and her winning entry was from her Year 1 project, ‘Fluid Strata: The Butterfly Effect’, which was exhibited at The Bartlett Autumn Show 2021.

Zachary Higson won the Lockdown Prize and the digital category with 'Site[s] of Flux – Roaming Giant’ - a location based project that investigates the nature of place and questions how a traditional architectural project should be carried out in terms of the relationships between studio and site. His project was also exhibited at The Bartlett Summer Show 2021. Zachary graduated Architecture MArch in 2021 and studied in PG25, tutored by Nat Chard and Emma-Kate Matthews.

At 9:47 am (GMT) on January 16th of the year 2100, hydrological overflows accumulated due to global sea level rise overwhelm London’s primary flood defence system, the Thames Barrier. As a result, London faces a series of catastrophic events directly linked to saltwater intrusion and urban flooding.

In order to ensure the city’s survival, both above and below ground, the project deploys the existence of London’s hidden rivers as core agents of a flood defence organism. Through a series of membranous landscape tissues, valves and deep channelling systems, the hydrological overflows meander between the strata before they fuse together to be exhausted into the deep ground.

The introduced tectonic is based on an experimental state of hybrid materiality focusing on responsive behaviour above and below ground. The proposed landscape exists in a reciprocal relationship with human and non-human territories, changing its shape according to water’s kinesis. Following the tidal Thames, the landscape operates in phases, submerging parts of its main body to lift others, acting as the central circulation for vegetation and the human experience. 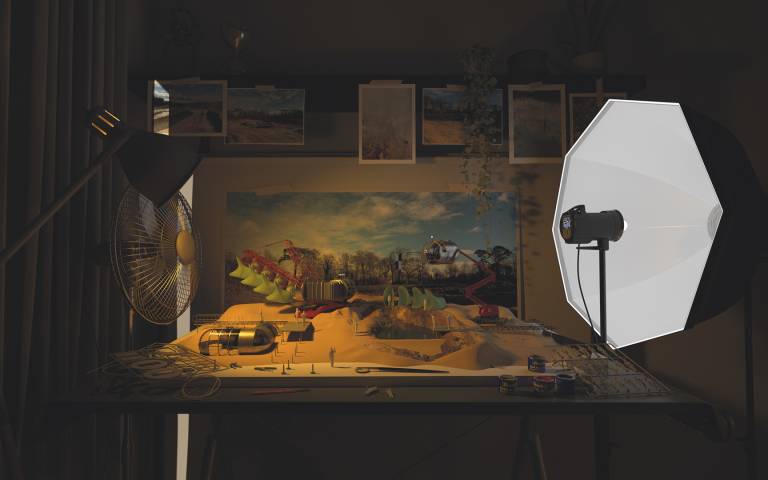 Situated on a disused sand quarry in Plumpton, the existing constraints of the site demand a constant movement of material in order to retain ownership. The architectural components deployed aim to harmonise the industrial nature of the site and its illicit use by local residents.

Born from physical and digital kitbashing, simulations and photogrammetry studies, the architectural language treads the boundary between engineering and architecture. With lockdowns limiting access to the site, the bedroom becomes its proxy and a duality emerges between the intended flux of material and the conceptual flux between the simulated world and the bedroom.

The award-winning drawing, above, depicts a newly formed pool overlooked by a lifeguard tower and vehicular pod carriage.

The winning and shortlisted entries will be displayed at Sir John Soane’s Museum in London, alongside other finalists and previous winners, until Sunday 20 February, as well as in a digital exhibition at the Vault of Contemporary Art, Make Architects’ virtual gallery space.