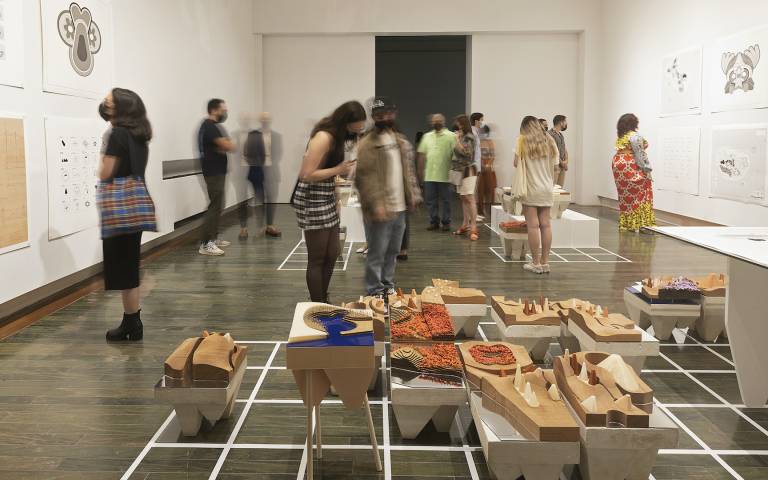 ‘Cüirtopia: Soft Crash’ launched last month at the Museo de Arte Contemporáneo (MAC) in Puerto Rico. MAC asked Bartlett alumnus Regnor Ramos to develop the show from his multi-format, research-by-design project ‘Cüirtopia’, which exists as a radio show/podcast; as a fictional story told via Instagram; courses at the University of Puerto Rico School of Architecture; a short film at the MAXXI in Rome; and as an interactive website www.cuirtopia.xyz where users can map out queer spaces in the Caribbean.

The museum building itself plays into the questions about how historical and architectural discourse can accommodate safe queer spaces, with MAC collaborating with Regner to find new ways to integrate the LGBTQ community into the site. A series of LGBTQ community events will accompany the exhibition, and participants will work with Dr Ramos to produce pieces that will queer the building through site-specific installations and performances.

'Cüirtopia' confronts architectural discourse by repurposing and queering the traditional formal languages of architectural documentation, representation, and design. The MAC’s physical location in relation to a queer, urban circuit in Santurce positions the building as an alternate safe space for queer modes of spatial appropriation, cultural production, and artistic imagination. Rather than using this building as an empty backdrop for the project, 'Cüirtopia: Soft Crash' writes the MAC into its story, through site-writing.

'Cüirtopia' confronts the complex architectural politics left by colonisation and how these are responsible for the exclusion and erasure of queer bodies and buildings from Puerto Rican history. A critique on violent processes of colonisation, the project looks to archipelagic thinking, architectural modes of making, and boundary-pushing cartographic representations to carve a space for queer futures in the Caribbean.

Dr Regner Ramos completed his PhD at The Bartlett - his research explored the place of the cyborg in the built environment. He is Associate Professor of Architecture at the University of Puerto Rico Río Piedras.

The show runs until 14 August 2022 and is funded by Flamboyán Arts Fund and the FIPI Award at the University of Puerto Rico Río Piedras Campus.