Zoe Diakaki and Marina Mersiadou were shortlisted for the Best Immersive Art & XR Award for their project Inhibition. 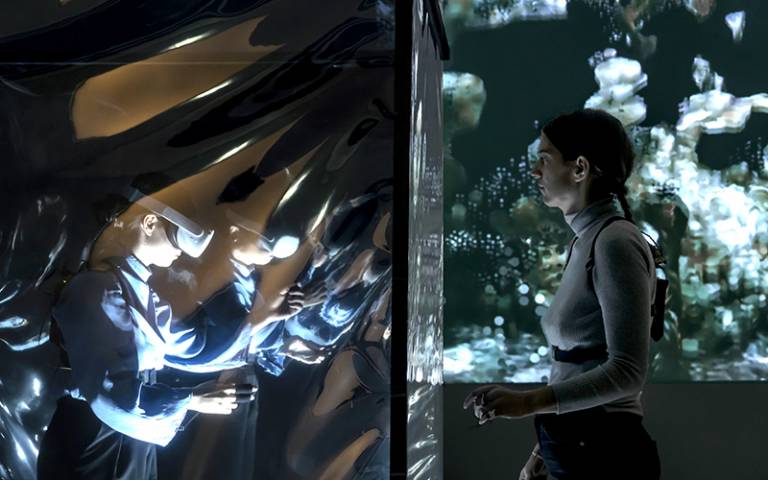 The BFI’s Immersive Art and XR Competition is part of the BFI London Film Festival. It presents and awards the most innovative work from artists and creators who are boldly exploring the intersection of art, film and extended reality to fully immerse audiences in the moment.

Zoe and Marina’s 10 minute immersive project was among 15 projects chosen for this year’s selection.

Based on Adolfo Bioy Casares’s 1940 novel The Invention of Morel, Inhibition is an immersive performance that questions conventional theatre by dissolving the roles of performers and audience. The project aspires to engage people with non-performative backgrounds to explore and interact with immersive technologies and become an active part of the performance. The intent is to enrich the discourse of VR integration in theatrical performances by nonprofessional participants.

The narrative unfolds in three parts following the journey of the main character, who confronts the limits of his perception and consciousness. Participants experience a deserted island and are challenged to rethink their subjective reality. A combination of virtual reality (VR) technology, biofeedback, and multilayered audiovisual stimuli encapsulates the dynamic relations between physical and virtual, actual and fictional. Responding to the alienation between body and physical space often felt in VR, Inhibition seeks to reconcile this split by integrating participants’ biodata into the creation of the visual landscape. The VR user and two further participants constantly reshape the inhabited space as biodata and movement affect the VR world. As a shared immersive experience, Inhibition invites the audience to explore their sense of agency as performers.

Zoe and Marina graduated from Design for Performance & Interaction MArch in 2021, both achieving a Distinction. Their principal supervisors were Fiona Zisch and Alex Whitley.

'Inhibition' was exhibited at The Bartlett Fifteen Show 2020. The Fifteen Show 2021 will launch on 14 January 2022, showcasing the work of students across three programmes: Design for Performance &amp; Interaction MArch, Design for Manufacture MArch and Situated Practice MA.