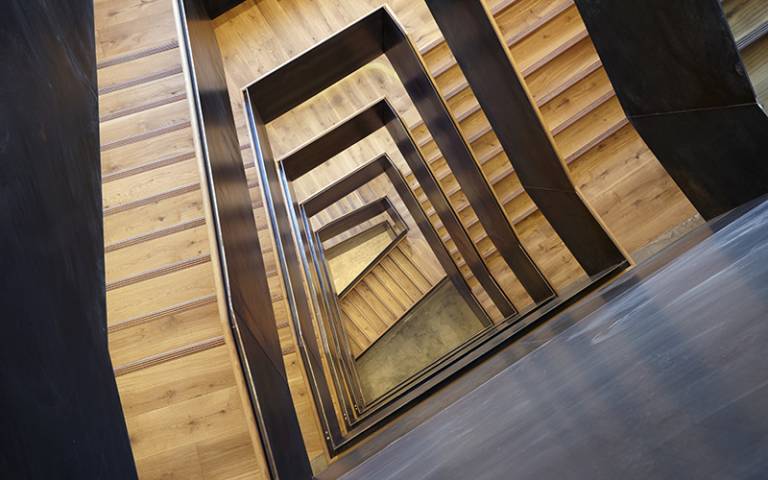 The new appointments recognise and celebrate each of the recipients’ continuing impact on the school, and deepen their future relationship with the school and UCL in years to come.

The new Visiting Professors are:

In addition, Farshid Moussavi has very recently been awarded an Honorary Fellowship from UCL, in recognition of her distinguished architectural career and contribution to widening participation in architectural education and practice.

Femi is Principal at HOK, working as the market sector leader for the Government and Justice sectors. He worked on the Francis Crick Institute, the Ministry of Defence HQ PFI redevelopment project, and the Old Bailey Crown Court refurbishment project. He has also spent fifteen years developing opportunities in sub-Saharan Africa for HOK, and the organisation is now designing and delivering projects in Nigeria, Sierra Leone, Ghana, Gabon, Mozambique, Tanzania and Egypt. Femi was elected to the RIBA Council in September 2020.

Lesley Lokko is an architect, academic and the author of eleven best-selling novels. She trained at The Bartlett School of Architecture and gained her PhD in Architecture from the University of London in 2007. She has taught in the UK, USA, Ghana, Sweden and South Africa and is currently Head of School at the Graduate School of Architecture, University of Johannesburg. She has lectured and published widely on the subject of race, identity, gender and the speculative nature of African cities. She has held numerous Visiting Professorships globally and was most recently a Master Juror for the Aga Khan Award for Architecture.

Philippe Morel is an architect and theorist, co-founder of EZCT (2000) and initiator and founding CEO of the large-scale 3D-printing corporation XtreeE (2015). He is currently an Associate Professor at the ENSA Paris-Malaquais (Digital Knowledge). He has taught a number of Architecture MArch units and B-Pro Research Clusters for The Bartlett since 2012; he previously taught at the Berlage Institute and the Architectural Association. He is interested in the elaboration of a theory of computational architecture.

She was awarded the Schelling Architecture Prize in Germany, and an Honorary Award from the Venice Biennale in 2010. Lu was a visiting Professor at Harvard GSD 2011, and listed among the RIBA’s 2015 Fellowships. She was the recipient 2019 Gold Medal of Tau Sigma Delta.

Wang Shu is a practicing architect and educator. He co-founded Amateur Architecture Studio with Lu Wenyu in 1997. In 2003, they founded the architecture department at China Academy of Art in Hangzhou, where Wang was the department chair. In 2007, the School of Architecture was established, where he served as the first dean of the school. His built works include Ningbo Historic Museum, Xiangshan Campus of China Academy of Art, Renovation of Wencun Village, and Fuyang Cultural Complex. Wang was the Kenzo Tange Visiting Professor at Harvard GSD in 2011. He is the visiting Professor in MIT, and Tongji Univeristy.

He has received an Honorary Professorship from Southeast University, a Honorary Fellowship from RIBA and Honorary Doctoral Degrees from RISD and Chinese University of Hong Kong. He has been awarded the French Gold Medal of the Academy of Architecture in 2011 and the Pritzker Architecture Prize 2012. He was named one of the 100 Most Influential People in the World by Time in 2013 and was the recipient 2019 Gold Medal of Tau Sigma Delta.

Jenny Sabin is an architectural designer whose work investigates the intersections of architecture and science and applies insights and theories from biology and mathematics to the design of responsive material structures and adaptive architecture. She is the Arthur L. and Isabel B. Wiesenberger Professor in Architecture, and Associate Dean for Design at the College of Architecture, Art, and Planning at Cornell University, where she established a new advanced research degree in Matter Design Computation. She is principal of Jenny Sabin Studio, an experimental architectural design studio based in Ithaca, and Director of the Sabin Lab at Cornell AAP.

Jenny focuses on the contextual, material, and formal intersections between architecture, science, and emerging technologies. Her book, LabStudio: Design Research Between Architecture and Biology, co-authored with Peter Lloyd Jones, was published in 2017. In 2017, she won the MoMA & MoMA PS1’s Young Architects Program with her submission, Lumen.

Neil Heyde is Head of Postgraduate Programmes at the Royal Academy of Music and Professor of Music of the University of London. He is also a solo cellist and has been cellist of the Kreutzer Quartet since the 1990s. Neil’s research is concerned with the ways in which musicians communicate with one another – and with exploring their relationships with instruments. He was a member of the REF2014 assessment panel for Music, Dance, Drama and the Performing Arts. He has given keynote lectures at major conferences and events internationally, exploring both his own research practice and some of the ways in which practice-driven research can be developed. He has also recently been appointed a visiting professor at the Sibelius Academy.

Farshid Moussavi graduated from The Bartlett in 1989. She is an award-winning British architect known for buildings such as the Museum of Contemporary Art in Cleveland and the award-winning Yokohama International Ferry Terminal. Alongside leading an award-winning architectural practice, Farshid Moussavi Architecture (FMA), she has been Professor In Practice at Harvard University Graduate School of Design since 2005. She lectures regularly at arts institutions and schools of architecture worldwide, and she is a published author.

Farshid was appointed Officer of the Order of the British Empire (OBE) in the 2018 Queen’s Birthday Honours for services to architecture. She was elected a Royal Academician in 2015 and Professor of Architecture at the RA Schools in 2017.