Annabelle, a fourth-year Master’s student, came first in the student category. It was a successful year for The Bartlett, with third place being awarded to another student, Andrew Riddell. RIBA’s annual Eye Line competition showcases the most accomplished architectural drawing and rendering skills from around the world. Students and practitioners are judged in two separate categories. The 2021 competition invited entries exploring resistance to the atomisation and isolation imposed by the COVID-19 pandemic.

Annabelle Tan was awarded this year’s first prize for ‘The River, Restoration and Its Rituals’, her investigation of Norfolk riverscapes, which created a dialogue between folklore and new habits. Sited along the River Wensum in Norfolk, the project is a roving restoration scheme that visits rural villages to restore the vulnerable chalk river while engaging and empowering the local community to sustain an intimate relationship with the environment through rituals and beliefs. The building is simultaneously a restorative and ritualistic machine, marrying ecological values with the process of restoration. Annabelle incorporated her Singaporean heritage into her drawings, using traditional forms of Asian drawn representation to describe a pastoral English landscape. 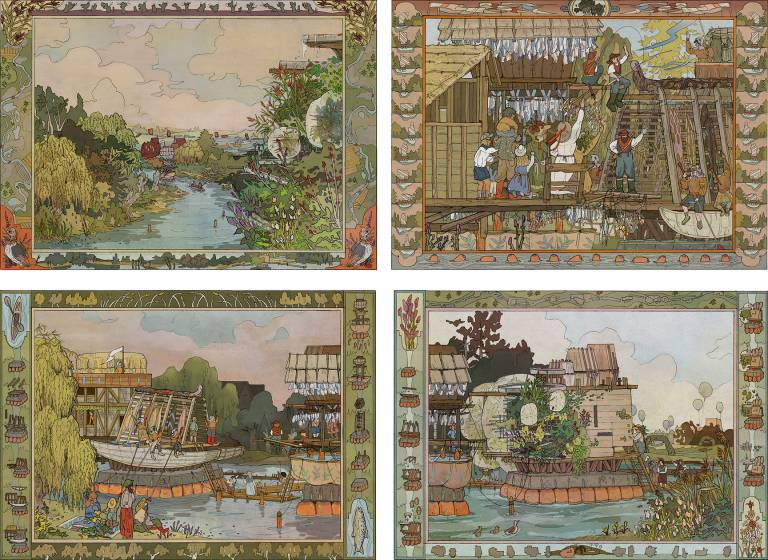 The judges unanimously awarded Annabelle the first prize, citing the “visual power of her constructed narrative” (Eva Jiřičná) and her “beautifully made images; well-observed, consistent and extremely skilled” (Nikki Bell), while Neal Shasore described Annabelle as “one of the few entrants aspiring to the clear sense of spatial narrative that most others fail to reach”. Her winning drawings will be displayed at the RIBA and on their website.

Annabelle has just completed her fourth year of studying Architecture MArch, within the PG11 unit, taught by Laura Allen and Mark Smout. Whilst studying her undergraduate degree, she also won the RIBA Bronze Medal in 2019.
Fifth-year Architecture MArch student Andrew Riddell (from unit PG16, taught by Matthew Butcher and Ana Monrabal-Cook) won third prize in the competition for his project ‘Lipstick on a Pig’, which proposes an architecture of a bespoke and new queer domestic, whilst parodying its heteronormative counterpart. The project draws on the aesthetic, social and domestic attitudes of the drag community, and questions traditional domestic architectural space, which fails to accommodate more fluid, alternative definitions of domesticity.