The Bartlett’s Ifigenia Liangi has won third prize in the international Drawing of the Year competition. 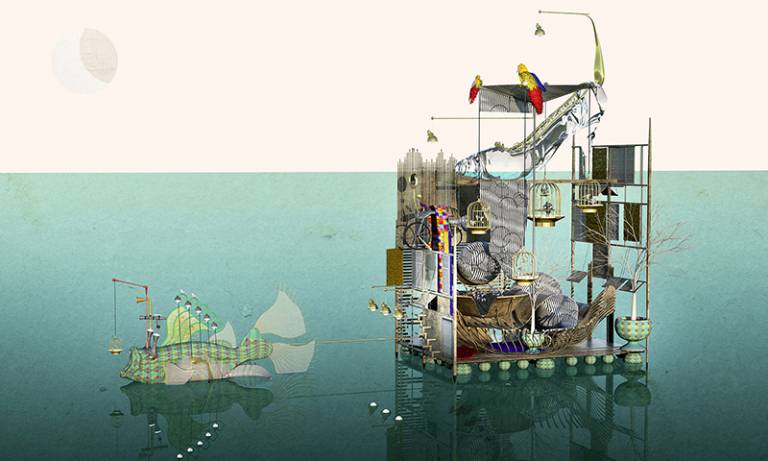 The competition, which had over 200 entries, was themed ‘Everyday Utopia’ and held at Aarhus School of Architecture in Denmark. Liangi’s 3D-rendered drawing is entitled ‘Cinderella’s Lost Shoe’ and illustrates a magic realist fairy tale novel she is currently writing, set in Athens in the near future.

She says: “The story starts with the colours of Athens being taken away, and any implication of a colourful thing, in an object or in light, being forbidden. This scene is in the Aegean sea, where Fisounos, the fish guard of the animal prisons, is dragging the colourful animals of Athens away from the city. Cinderella's lost shoe is also imprisoned, as it is a classic fairy tale allegorical object referring to escape from a place of despair. It is dangerous, as it is made of glass and by reflecting the sunlight it has the potential to make a rainbow.”

The judges, architects Moon Hoon, Trine Berthold and Torben Nielsen, praised the drawing’s energy and skill, observing that in it, “…the everyday utopia is a quest – removed from society and normality to follow a dream.” First prize went to Charles Weinberg and Shai Ben Ami from Bezalel Academy of Arts & Design, Israel; and second to Richard Morrison from the University of Westminster.