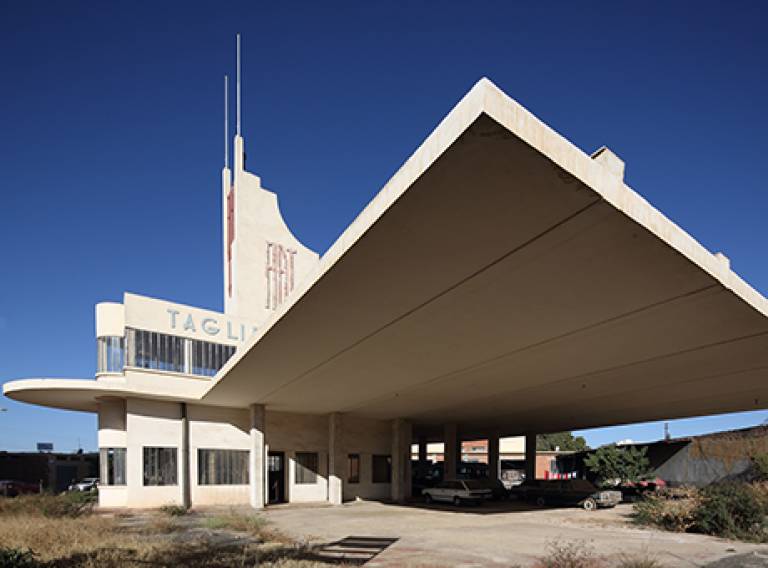 Shortly after it was announced that Bartlett Design PhD candidate Judit Ferencz had won this year’s RIBA LKE Ozolin Studentship with 'The Graphic Novel as an Interdisciplinary Conservation Method in Architectural Heritage', four members of The Bartlett were shortlisted for the RIBA Research Award.

Bartlett Teaching Fellow Edward Denison worked with the Asmara Heritage Project for his research on Africa’s Modernist City: UNESCO World Heritage Nomination. The research combines past and present photographs to convey the life of a building in Eritrea's capital city over time. Asmara provides a unique example of a colonial city facing modernity and postcolonial struggles. In seeking to redress the under-representation of African and modernist sites on the World Heritage List, Denison's research challenges traditional perceptions of colonial heritage and modernism in order to move beyond a Eurocentric gaze.

Bartlett Tutor David Roberts’ entry, Make Public: Performing Public Housing in Ernö Goldfinger’s Balfron Tower, is based on his PhD thesis looking at the history and future of east London housing estates undergoing regeneration. Central to his research into 1965-7 Balfron Tower was engagement with current and former residents through a series of workshops to build collective knowledge, and activism which draws on this material and evidence to contribute to a more informed public debate and planning decisions.

Roberts developed an interactive online archive and a successful application to list Balfron Tower at Grade II* which explicitly recognises Goldfinger’s social ideals and Balfron’s social purpose as a key component of its heritage. In doing so, he advanced an argument that the practice and guidance of heritage of post-war housing estates must not only pay tribute to the egalitarian principles at their foundations, it must enact them.

The entry, ‘Spotless Lilies and Foul Smelling Weeds’: Architecture and Moral Cleanliness in Victorian Magdalene Convents’ by former Bartlett PhD student Kate Jordan was also shortlisted. The research focuses on religious houses in Britain since the Catholic Emancipation of 1829 – an area largely overlooked by architectural historians.  In looking at ‘nuns as designers and builders’, Jordan’s work on Magdalene convents present both the historical and contemporary voice of women who have come to shape the design of religious buildings. Her research combines theology, architectural design and cultural history to present a new understanding of women in the built environment.

Finally, Bartlett Professor Murray Fraser has collaborated with Dr Nasser Golzari and Dr Yara Sharif on their entry Palestine Regeneration. In pushing urban and sustainable design through a close engagement with community groups and everyday cultural practices in Palestine, the project uses ‘social mapping’ to explore conflict and cultural identity. Focusing on the principles of ‘stitching’ and ‘empowering’, the project examines ways in which architecture and urban design can be used to repair the landscape of Palestine/Israel.

The winner will be announced in early December.