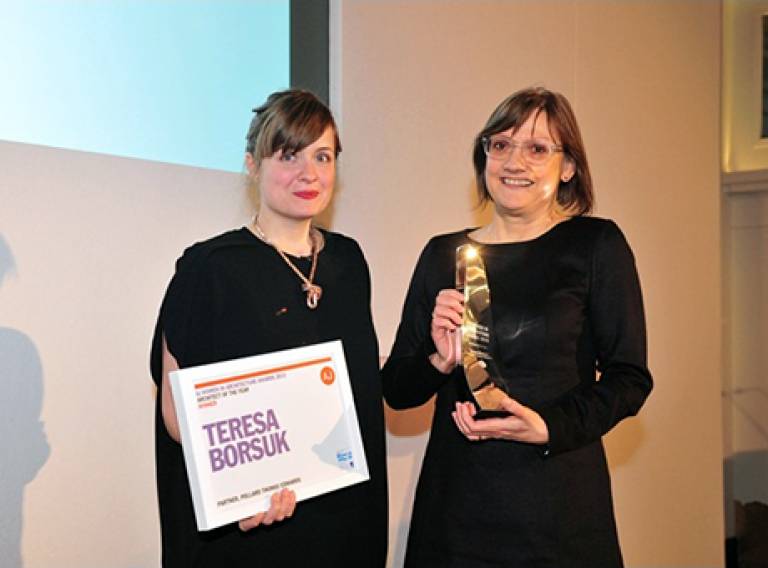 Chosen over an impressive shortlist of women architects, Borsuk was recognised for her 'remarkable' contribution to improving equality within her practice. Through her leadership, the number of women on the AJ100 firm’s staff has grown to more than 50 per cent. Judges felt the support she gives to women in her firm made her a role model for future generations.

Borsuk graduated from The Bartlett with a Graduate Diploma in Architecture in 1981. She joined Pollard Thomas Edwards in 1984 and was made a partner last year as the firm celebrated its 40th anniversary. She has over 30 years’ experience in the housing, mixed-use and regeneration sectors, and has designed and delivered projects ranging from major developments to infill sites and refurbishments. In 2014 she completed a £14 million, 76-home residential project 'The Avenue' in Saffron Walden and a scheme of four new six to seven-storey apartment blocks in Cambridge.

The prestigious award was presented at a ceremony to celebrate the ROCA-sponsored AJ Women in Architecture campaign at London’s Claridge’s on 27 February.

See the AJ video 'Why we gave the Woman Architect of the Year Award to Teresa Borsuk'.

AJ Woman Architect of the Year 2015

Image: Teresa Borsuk picking up her award after being crowned Women Architect of the Year 2015. Image courtesy of the AJ.