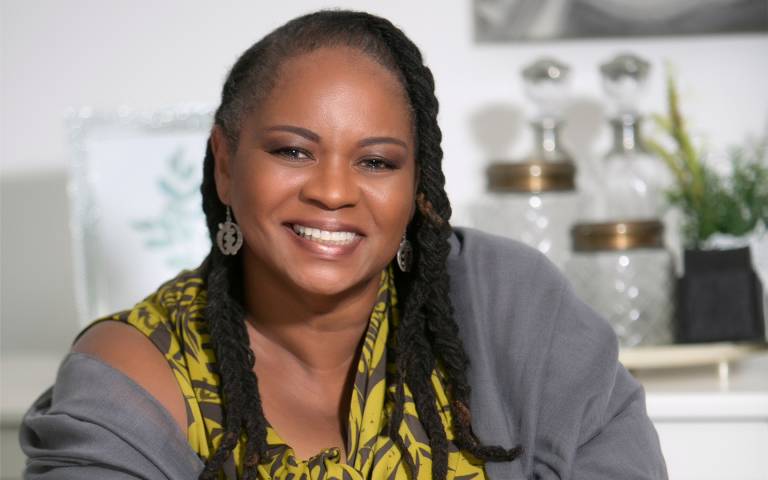 Rosemary Campbell-Stephens MBE will be hosted by the Architecture & Historic Urban Environments MA Programme to speak on the Global Majority Framework.

The Architecture & Historic Urban Environments MA programme is delighted to welcome Rosemary Campbell-Stephens MBE to speak on the importance of centring the Global Majority in a time of global reckoning, reimagining and resetting.

Rosemary will speak about how the exceptional times in which we live, and the systemic implosions that are taking place, require deep transformational thinking that embraces and amplifies the collective knowledge, wisdom, and perspective of the global South within the equitable racial, spatial places that we are intentionally creating. At a time of systemic implosion, environmentally, climatically, politically, economically, spiritually and a global pandemic, she argues that returning to the indigenous wisdom of the Global Majority could be the crucible for ethical and sustainable change in a technological age. She challenges notions of modernity and globalisation that come from a single minority narrative.

Rosemary Campbell-Stephens' book, Educational leadership and the Global Majority: Decolonising Narratives, published by Palgrave Macmillan, focuses on the criticality of centring the 85% who constitute the Global Majority on planet Earth in a time of reckoning, reimagining and reset. Her book in part addresses how the role of Black educators, in changing not just the face but the heart of educational leadership in London schools through 2003-2011, has been written out of the London Challenge narrative. This speaks to the continued neo-colonial eradication of Black and other Global Majority groups' leadership in the transformation of societies.

Rosemary Campbell-Stephens is a keynote speaker in her areas of expertise and passion, namely leadership and decolonisation. She is currently amplifying discussions about how a Global Majority mindset can positively disrupt narratives, by asking questions about the underlying philosophical perspectives that are embedded in our systems, paradigms, ways of seeing and being. To this end, she is developing the Global Majority framework.

She speaks, writes, and delivers on leadership across the globe. She aims to situate the Global Majority at the heart of the conversation rather than 'other' them and their knowledge as so-called ‘minorities’. By centring more ‘we’-orientated collective models and decentralising individualistic, egocentric, competitive, patriarchal, colonial, linear, top-down models, she proposes transformation on a scale commensurate with the challenge.

As part of the UK government's multi-million pound London Challenge Initiative in 2003-2011, Rosemary developed a leadership preparation programme focusing on increasing the numbers of Black and Asian leaders in London schools, for the Institute of Education, UCL. Investing in diversity became the catalyst for all subsequent leadership programmes addressing the under-representation of Black, Asian, and minority ethnic leaders in England's schools sector. In 2009, a sister programme, Leading for Equity, was launched at the Ontario Institute for Studies in Education, University of Toronto, Canada.

Rosemary is a Visiting Fellow at the Institute of Education, UCL. Her book Educational Leadership and the Global Majority Decolonising Narratives, was published in December of 2021 by Palgrave Macmillan.