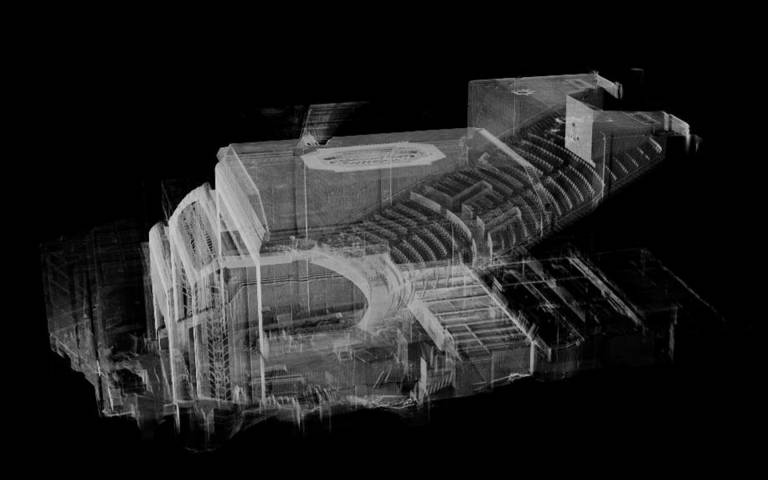 The Bartlett Screening Room is a series of events addressing questions around critical urbanism through the screening of short films and moving image, followed by discussion.

All events in this series will be held on Zoom. Check the schedule for dates and registration links.

International short films and moving image artworks are screened for collective viewing online and followed by a conversation with the artists and/or filmmakers. Sessions are open to the public as well as students and staff across UCL. The screenings may be especially interesting to those studying architecture, anthropology and related arts and social sciences.

The events run on alternate Wednesdays during the London lunch hour to allow the screening room to be joined by students and the public from Bogota, to The Bartlett, to Beijing. Watching together, talking together, thinking together.

The Bartlett Screening Room was set up in 2020 as countries across the world went into lockdown. It is a collaboration from Henrietta Williams, an artist/researcher based at The Bartlett School of Architecture, and Oliver Wright, programmer of Open City Documentary Festival. 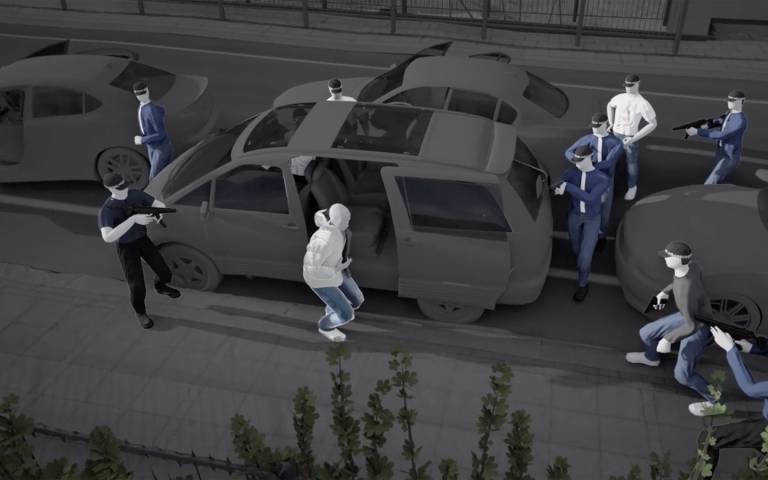 With Nicholas Masterton from Forensic Architecure and Jordan Rowe as respondent.

Forensic Architecture is a research agency based at Goldsmiths University of London specialising in a form of spatial practice described as ‘investigative aesthetics’. This methodology sets out to question the production of evidence and the distortion of facts through both technologies and systems of knowledge production.

In August 2011 Mark Duggan was shot dead by police in Tottenham, North London. The Independent Police Complaints Commission (IPCC) informed the UK media that Duggan was killed with a gun in his hand after he shot and injured an officer. This was immediately questioned by his family and local community who gathered at the Tottenham police station. Protests in Tottenham amplified quickly and spread into a countrywide uprising widely labelled as the ‘London riots’. Over the course of 7 days huge numbers of police were deployed in paramilitary style riot gear and over 3000 people were arrested across the UK. 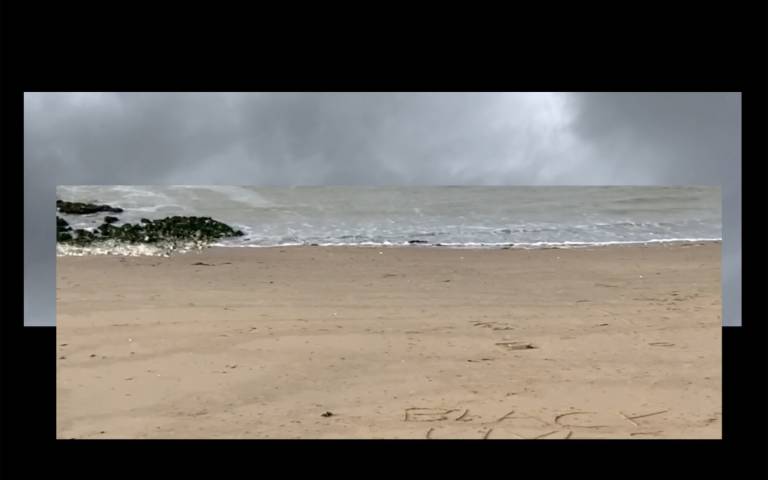 Boots on Ground is an autobiographical account of a second-generation British South Asian woman’s experiences with the police, racism and violence in London. Presented in split-screen, mobile phone footage captured during protests in the summer of 2019 show the legs and feet of police officers patrolling the area around Buckingham Palace and The Houses of Parliament in indiscernible formations. Kiran Kaur Brar’s spoken narration describes a disturbing personal chronology of police violence and racial discrimination, beginning in her childhood in the 1980s and eventually converging with the day of filming.

Margate is a reticent storytelling video of family holidays past and present, haunted by the presages of cancelled future trajectories, appropriately set in the city which was once one of the UK's symbols of the urban 'end of the future/no future' and is now the self-styled success case study for coastal, art-led regeneration: Margate.

In both films artist Kiran Kaur Brar activates a powerful autobiographical lens to explore the micro and macro politics of racial discrimination in the UK. Central to both works are carefully controlled written scripts, voiced by the artist, combined with lo-fi visuals that add to the viewer’s sense of deep unease. These quiet spatial studies help us as viewers to understand how discrimination and power structures operate in both structural state-led institutions as well as the actions of localised individuals.

With Miko Revereza and Kanzi Leghari as invited respondent.

The work of experimental film maker Miko Revereza sets out to interrogate his personal history as an undocumented person who grew up in the US. The American dream is set against the lived experience of diaspora and the challenges of the immigrant experience.

Disintegration 93-96 follows the story of the artist’s first arrival into LAX airport as a young child flying in from the Philippines in 1993. Nostalgic VHS material of his father as a young man is interwoven with contemporary footage of the artist smoking cigarettes and wearing sunglasses, almost a parody of Americania. An overarching spoken self-reflexive text interrogates the gap between the artist and his father. Distancing documents the logistics and poetics of Miko Revereza’s decision to leave the United States and return to the Philippines. 'My ticket is one way', the filmmaker explains to his grandmother as she suddenly realises he isn't coming back. Distancing is a film about this personal realisation; to leave and thus become exiled from the country where Revereza was raised.

Both films have a dream-like structure, formally embedding the notion of Revereza as a so-called Dreamer – an undocumented US migrant who arrived in the country as a child. Following Revereza’s decision to abandon the US and his family home after 26 years, he is now based in Manila. Acting as both important personal testimony of what it means to be stateless, both these films speak to the powerful themes of diaspora, colonisation and Americanisation.

With Simon Liu and respondent.

Film artist Simon Liu takes Hong Kong as the site of investigation in much of his work as a way to track psychogeographical pathways through his place of origin.

‘They said a storm is calling this way but we’re still waiting. Lives carry on in Hong Kong as traces of civic upkeep morph into sites of remembrance. Decorative structures mimic nature then occasionally malfunction - transforming common spectacle to warning signs. The light urges to tell us something but can't quite get its point across, patience tested for another day’. SL

‘British Colonial-era structures overlook scenes in the aftermath of civil unrest as Hong Kongers work to retain some semblance of normality. The sound of petty arguments from local TVB soap-operas of the 1980s are put in concert with captive animals, political graffiti and desolate highways. Suspension cables and ship anchor lines reveal a fragile urban anatomy; the structures that keep the city moving along. As civic functions grind to a halt, the limits of our empathy and control come into question’. SL

Sasha Litvintseva is an artist filmmaker and writer researcher, whose work is situated on the uncertain thresholds of the perceptible and the communicable, organism and environment, and knowledge regimes and power, at the intersection of media, ecology and the history of science.

A cruise ship during the Brexit referendum. A colony of birds unwittingly killing the forest they call home. A world in a pandemic. Nothing is a closed system. In moving through these three ecologies the film questions what old images can mean after a rupture and offers a space of mourning.

Steeped in elliptical history and historical simulacra, Exile Exotic is set at a hotel that is a replica of the Kremlin. Narrating the exotic beginnings of my mother's and my exile from Russia, the film serves as a platform for us to visit the Kremlin again, albeit by the side of a pool. Soundtracked by an operatic score reminiscent of the song of the sirens making Odysseus stray on his long journey home, our story reverberates throughout the scope of Russian history's limiting of free movement of individuals. This film is a pilgrimage. This film comes in waves.

The Lake and the Lake, Sindhu Thirumalaisamy, 2019

With Sindhu Thirumalaisamy and Maxell Mutanda as invited respondent.

Artist filmmaker Sindhu Thirumalaisamy’s work cuts across moving image, sound and text as way to to explore common places in her home country of India such as hospital, parks, streets, temples, mosques, and lakes. These are considered as multivalent sites that hold possibilities for collective resistance and care.

'In the peripheries of Bellandur lake in Bangalore, "India's Silicon Valley", the act of observation is interrupted by flying foam, noxious gases, daydreams, and questions from passers-by. Despite its spectacular toxicity, the lake remains a valuable resource and refuge for counterpublics. Standing alongside fishing communities, migrant waste workers, security guards, street dogs, and children, it is evident that there is no nature that doesn't also include all of us’. ST

With Bedwyr Williams and Tom Keely as invited respondent.

The work of internationally acclaimed Welsh artist Bedwyr Williams uses drawings, architectural models and short films, as ways to parody the world around him and gently mock systems of cultural production.

Hotel 70º is a part animated film about a strangely shaped hotel from his home town of Colwyn Bay on the Welsh Coast. In the short film ‘Y Tyrrau Mawr’, which translates as ‘The Big Towers’, we perceive a new city of steel and glass built into the sublime landscape of the Welsh Valleys. Ballardian in tone, Williams crafts a careful narrative to tell the story of the inhabitants of this new city. It is a site entirely woven by starchitects, revered and mistrusted in equal measure by the local population.