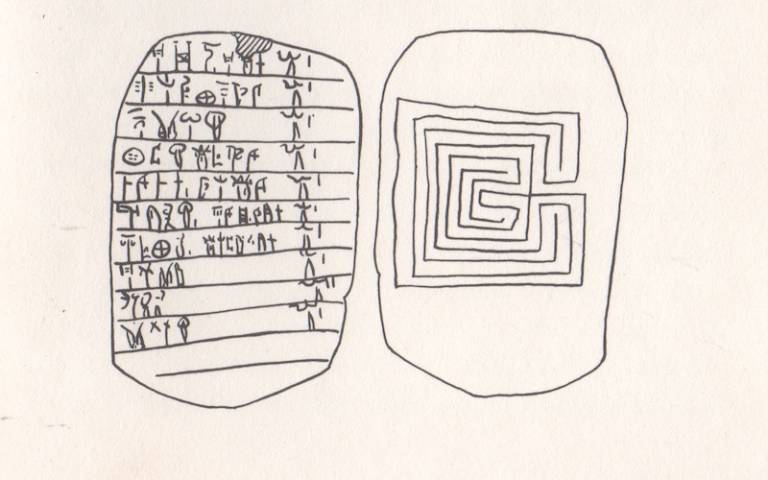 Streamed live on The Bartlett School of Architecture's YouTube channel, this will be Sophia Psarra's inaugural lecture.

Taking inspiration from a clay tablet found at a Bronze Age palace complex in the Peloponnese in 1957, this lecture will discuss architecture’s long-term relationship with language and numbers. It will explore the values of language as an analogy for understanding architecture, and the strength of numbers in making architecture ‘speak’ of social relationships, inequalities, politics and power.

The lecture will propose that the informed synthesis of ‘winged words’ and ‘weighty numbers’ holds the key to what architecture can fundamentally offer as a creative discipline to deal with some of our most pressing architectural and urban questions. It will argue that our ability to synthesise, ethically and creatively, the wisely guided and the unguided evolutionary processes of our buildings and cities is indispensible to addressing key systemic issues. How we employ intersecting definitions of the imagination, authorship and agency can give renewed impetus to such global challenges as climate change, social inequalities and spatial justice, whose well-worn terminology often seems to have lost the power to move.

Sophia Psarra is Professor of Architecture and Spatial Design at The Bartlett School of Architecture, UCL. Her research focuses on spatial morphology in relation to the histories of building and cities that have influenced their development, alongside the social patterns of human activity and cultural meaning. She is the author ofThe Venice Variations (UCL Press, 2018) exploring cities and buildings as multi-authored processes of formation alongside authored projects of design intention. Her book Architecture and Narrative (Routledge, 2009) addresses the relationship between design conceptualization, narrative and human cognition. Her edited book The Production Sites of Architecture (Routledge, 2019) focuses on the interaction between the physical and conceptual realms in the production of knowledge in architectural practice and scholarship.

She is the convenor of the Parliament Buildings Conference (in collaboration with the UCL European Institute), a multidisciplinary event exploring the exercise of political power and the parliamentary spaces within which it is mediated. She has received research funding by the NSF (USA), the Leverhulme Trust, UCL Grand Challenges, the University of Michigan and the Onassis Foundation. She has collaborated with leading cultural institutions in the UK and the USA on the relationship between architecture, exhibition design and visitors’ experience. Her architectural work has been exhibited internationally in the context of first prizes in EUROPAN architectural competitions and the Venice Biennale (1991).

Image: Clay tablet (Cn 1287) found in Pylos in 1957 with a list of men and goats on the verso (in Linear B) and carefully executed drawing of a labyrinth on its recto. From Lang, American Journal of Archaeology 1958.