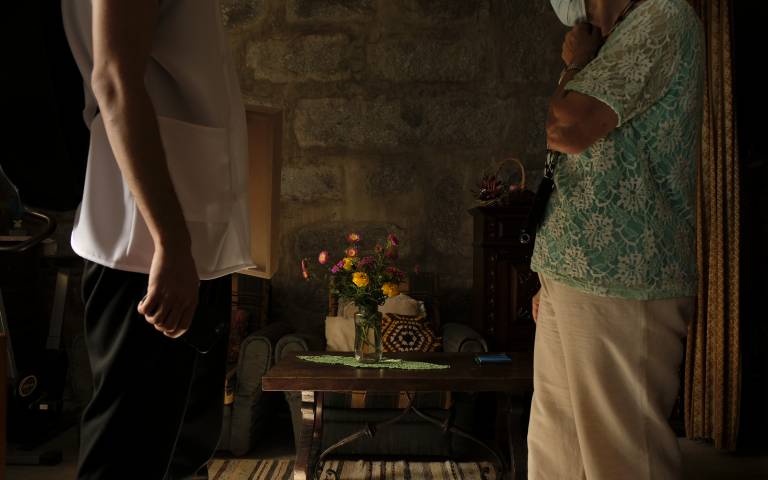 This lecture is part of the annual PhD Research Projects conference and brings together the conference’s five respondents, Irene Cheng, Amy Kulper, Huda Tayob, Phil Ayres and Ayona Datta. Variously located in the United States, in South Africa and across Europe, they will discuss the topic of “distance.” Each speaker will contribute specific thoughts on their own response to the theme of “distance” in relation to their work and teaching practices, reflecting on a broad range of temporal and spatial forms of distance in our research at the moment, ranging from both physical and conceptual distance to different kinds of critical distance as well as shifting relations between the past, present and future (e.g. how dimensions of the past may have suddenly been activated in this present moment). The subsequent group discussion will be co-hosted by PhD students Kerri Culhane and Naomi Gibson.

Irene Cheng is an architectural historian and critic, and an associate professor at the California College of the Arts. Her research explores the entanglements of architecture, culture, and politics in the nineteenth and early twentieth centuries. She is a co-editor of Race and Modern Architecture: A Critical History from the Enlightenment to the Present (University of Pittsburgh Press, 2020). Her current book project, entitled “The Shape of Utopia: The Architecture of Radical Reform in Nineteenth-Century America" (forthcoming, University of Minnesota Press) explores the geometry of architectural projects affiliated with anarchist, socialist, abolitionist, free love, spiritualist, and other radical antebellum movements.

Amy Catania Kulper is an architect, theorist, and curator whose teaching and research focus on the intersections of history, theory, and criticism with design. Recently, her teaching and scholarship have addressed questions of the historiographical phenomenon of presentism, the claims, relevance, and revisionism of the discipline of architecture in the post-truth era, and decolonizing the architectural canon while co-authoring our discipline’s future imaginary. Amy completed her Ph.D. at Cambridge University, was tenured as an Associate Professor at the University of Michigan, and is currently the Department Head at the Rhode Island School of Design (RISD).

Huda Tayob is History & Theory Programme Convener and co-leader of Unit 18 at the Graduate School of Architecture, University of Johannesburg. Her doctoral research looked at the spatial practices of African migrants and refugees in Cape Town, with a particular focus on mixed-use markets established and run by these populations and their wider trans-national connections. Her general academic interests include a focus on minor and subaltern architectures, the politics of invisibility in space, and the potential of literature to respond to archival silences in architectural research. Her recent publications include “Subaltern Architectures: Can Drawing ‘Tell’ a Different Story” (Architecture and Culture, 2018), the open-access curriculum website RaceSpaceArchitecture.org and “Architecture-by-Migrants: The Porous Infrastructures of Bellville” (Anthropology Southern Africa, 2019). She is also currently co-curator of the Goethe funded project, Archive of Forgetfulness.

Phil Ayres is an architect, researcher and educator. He is Associate Professor at CITA (Centre for Information Technology and Architecture) at the Royal Danish Academy, Copenhagen, which he joined in 2009 after a decade of teaching and research at the Bartlett, UCL. His research primarily focuses on the design and production of novel bio-hybrid architectural systems that couple technical & living complexes, together with the development of complimentary design environments. Phil has pursued this research in the context of two EU funded Future and Emerging Technology (FET) projects – flora robotica (www.florarobotica.eu) and Fungal Architectures (www.fungar.eu) –  acting as Principle Investigator on both. Phil’s teaching roles are focused at Masters and PhD level and he is also the editor of the title Persistent Modelling – extending the role of architectural representation published by Routledge in 2012.

Ayona Datta teaches at UCL Department of Geography. Her broad research interests are in postcolonial urbanism, smart cities, gender citizenship and urban futures. In particular, she is nterested in how cities seek to transform themselves through utopian urban visions of the future and their impacts on everyday social, material and gendered geographies. She uses interdisciplinary approaches from architecture, planning, feminist and urban geography, combining qualitative, digital/mapping and visual research methods to examine urbanisation and urban development as experiments in urban ‘futuring’. For her contributions to understanding of smart cities through fieldwork she received the Busk Medal from Royal Geographical Society (with IBG) in 2019.

Architectural historian Kerri Culhane documents urban immigrant neighbourhoods on New York’s Lower East Side. In 2015, she guest curated the exhibition Rediscovering the Architecture of Poy Gum Lee, 1900-1968 for the Museum of Chinese in America, a survey of the life and career of Chinatown’s first Chinese American architect, based on Kerri's unearthing of Lee's personal papers. In 2019, she examined housing, immigration, and public health policy at the turn of the twentieth century in the exhibition The Lung Block: A New York City Slum & Its Forgotten Italian Immigrant Community (at the New York City Municipal Archives, with co-curator Stefano Morello). Her forthcoming doctoral thesis at the Bartlett explores a socio-spatial history of Chinatown since 1882.

Naomi Gibson is an architect and PhD candidate at The Bartlett School of Architecture, UCL, where she also obtained her degree and masters. Her doctoral research – supervised by Professor Sophia Psarra and Professor Jane Rendell – is an exploration of speech as a tool for representation and design in the early stages of an architectural project. More broadly as a researcher she is interested in the social complexities of designing public places and spaces, as well as the role of the architect within this process. Prior to undertaking a PhD Naomi worked in practice where she was involved with a variety of masterplans and building projects for schools. She currently teaches within the architecture schools at the University of Greenwich and Central Saint Martins (2019-present) and has been a visiting critic for several UK schools of architecture. Previously, she taught architectural design at Oxford Brookes University.