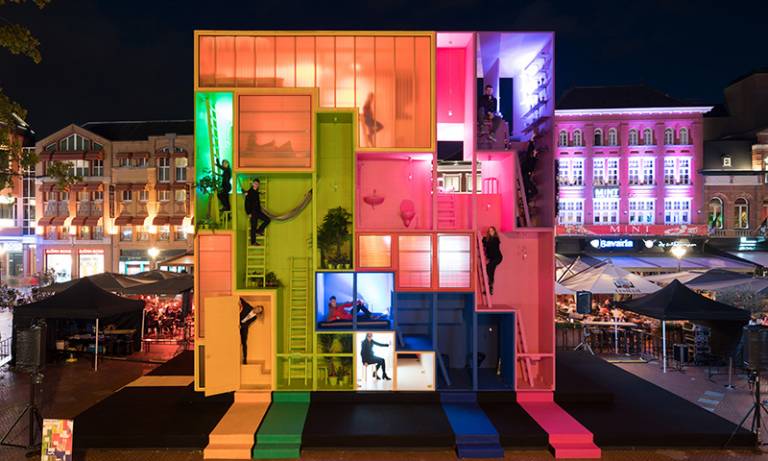 In this lecture, Winy Maas talks about the recent works of his architectural firm, MVRDV, and about the project '(W)ego' at the research institute The Why Factory. The Why Factory is a think tank that MVRDV runs in collaboration with Delft University of Technology, which visualises scenarios and models of the future city.

Among other themes, Winy will discuss the value of the iconic and the copy-paste generation, as well as urban planning methods and software that enable our cities to develop towards a better future.

The Why Factory's project '(W)ego'

'The future city is flexible. Have you ever dreamed of sleeping suspended high in the air? How would it feel to sleep inside a vertical hanging garden? What if your room was made of stairs? Would you dare to sleep in a room that was a billboard? Or inside a shimmering grotto? What is your dream room?'

Winy Maas says: “Based on the hypothesis that the maximum density could be equal to the maximum of desires, this research conducted by the Why Factory explores the potential for negotiation in a dense context. Through gaming and other tools, Wego explores participatory design processes to model the competing desires and egos of each resident in the fairest possible way.”

Winy Maas is an architect, urban designer and landscape architect and one of the co-founding directors of the globally operating architecture and urban planning firm MVRDV, based in Rotterdam, The Netherlands. The firm is known for projects such as the Expo 2000, the vision for greater Paris, Grand Paris Plus Petit, the Market Hall in Rotterdam and more recently the Crystal Houses in Amsterdam.

Winy is a professor at and director of The Why Factory, which he founded in 2008 at Delft University of Technology. He is currently a visiting professor at the Graduate School of Architecture, Planning and Preservation at Columbia University, New York, as well as at the Illinois Institute of Technology, Chicago. Winy Maas has also been at several other universities, including the University of Hong Kong, ETH Zurich, MIT, and Yale University.

In addition, Winy designs stage sets and objects and was curator of Indesem 2007. He curates exhibitions, gives lectures around the world and takes part in international juries. In 2013, Winy Maas joined the Economic Development Board of Rotterdam (EDBR). In 2012, he was appointed urban supervisor for the city of Almere and since 2016 he has been developing a regeneration framework for the city centre of Glasgow. With both MVRDV and The Why Factory, Winy has also published a series of research projects.

Image: MVRDV & The Why Factory