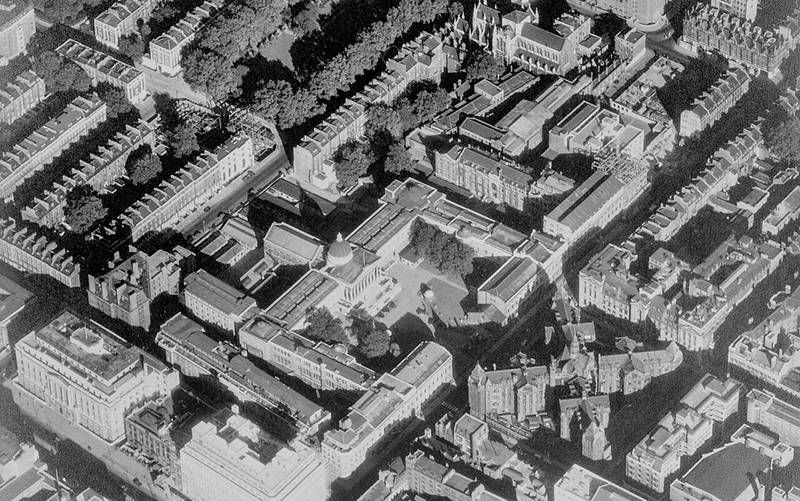 This study examines the architectural history of UCL’s campus in Bloomsbury, from its foundation to the outbreak of the Second World War. UCL traces its beginnings to 1825, when a group of radical thinkers set about establishing a secular, non-residential metropolitan university. This institution was the first university in the capital and the only one of its kind in England. Its first architectural expression was the grand neoclassical building constructed in 1827–9 to designs by William Wilkins. Only the east wing and portico of this scheme were completed, yet successive wing extensions have formed a dignified quadrangle in Gower Street. A hospital was constructed opposite the university in 1833–4, securing space for clinical teaching. The growth of the university and its hospital over the next century propelled their expansion, with the construction of purpose-built blocks and the adaptation of buildings in the immediate vicinity.

Existing scholarship has concentrated on the idea that the university’s founding values are represented by the neoclassical style of the quadrangle. This study draws on a wealth of archival records and field investigation to consider the historic and geographical core of UCL’s estate, a sprawling complex with a mixture of purpose-built blocks and converted buildings. Institutional identity is examined in concert with practical influences on the architectural evolution of the campus, such as finances and functionality.

The matter of identity also arises in the attribution of the university’s buildings to specific architects and designers, which points to a tradition of enlisting the talents of professors such as T. L. Donaldson, T. Hayter Lewis, T. Roger Smith and A. E. Richardson. In practice, their work was informed by multiple voices such as university staff and committees. This research addresses significant gaps in knowledge of the buildings, planning and development of the Bloomsbury campus, while examining pertinent issues of identity, attribution and methodology in the study of architectural history.

Amy Spencer (née Smith) works as a historian in the Survey of London, part of The Bartlett School of Architecture. She studied English Literature at Durham University and History of Art at the Courtauld Institute of Art, before a placement in the Architectural Investigation team at English Heritage. Since joining the Survey of London in 2015, Amy has researched the Royal London Hospital and its estate towards the forthcoming volumes on Whitechapel and assisted with preparing the volume on Oxford Street for publication. Amy also contributes to The Bartlett's Architecture MArch and Architecture & Historic Urban Environments MA, assisting with the Survey’s workshops on fabric analysis and measured survey. Her doctoral research on the architectural history of UCL will contribute to a future monograph in the Survey of London series.