The Bartlett was born with a radical streak in its veins. In 1841 it became part of University College London, whose founding principles proved to be a turning-point for education in Britain. 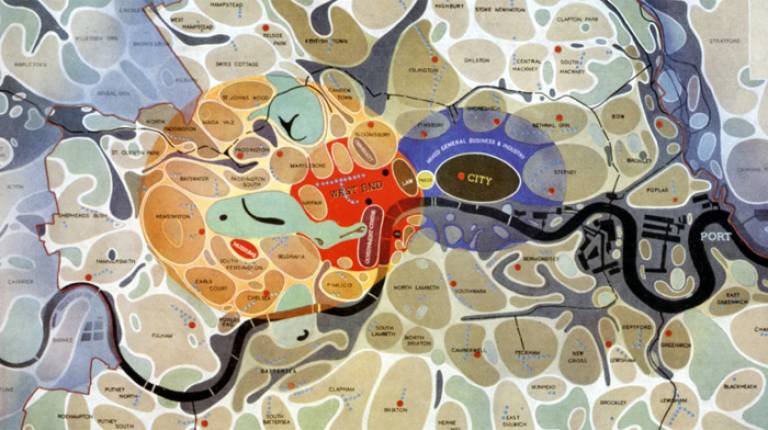 UCL offered a secular alternative to the religious universities of Oxford and Cambridge, and reflected the liberal ideas on society and education of philosopher Jeremy Bentham.

It was the first English university to make courses available to people regardless of religious belief, social status and gender. It was a radical move even to create a chair of architecture, the first of any British university.

In 1841, the built environment on UCL’s doorstep was still taking shape; architecture was concerned with the growth and creation of entire urban neighbourhoods in London, such as Bloomsbury.

Gordon Square and Tavistock Square had recently been completed, to identical dimensions, by Thomas Cubitt. St Pancras New Church, at the top of Upper Woburn Place, had been built to serve the newly built-up areas close to Euston Road.

Thomas Leverton Donaldson, UCL’s first chair of architecture, held that the discipline spanned both arts and sciences, and the faculty developed along these lines. The faculty’s name was taken from its great benefactor, Sir Herbert Bartlett, a civil engineer and contractor involved in a number of landmark London buildings.

Sir Herbert’s donation allowed The Bartlett to become one of the first institutions to offer planning alongside architecture as a field of study with the appointment, in 1914, of the notable architect and planner Professor Stanley Adshead, who went on to write the highly influential Town Planning and Town Development (1923).

The Bartlett has always been a place of innovation, creativity and leadership in teaching and research.

In the 1960s, under Professor Richard Llewellyn Davies, the faculty restructured to become fully multidisciplinary and incorporate all facets of the study and design of the built environment.

And there have always been inspirational and internationally-renowned figures in the academic ranks, such as architectural historian Reyner Banham, planner and historian Sir Peter Hall, and architects AE Richardson, Walter Segal and Archigram founder Sir Peter Cook.

In 1992 The Bartlett School of Graduate Studies was founded as the original home for postgraduate study at The Bartlett. The same year The Bartlett added advanced spatial analysis to its portfolio, with the creation of the Centre for Advanced Spatial Analysis as an inter-departmental initiative between The Bartlett, Geography, Geomatic Engineering and Archaeology.

More than a decade later in 2009 the faculty expanded to formally include the study of construction and project management, the roots of which go back to the 1960s when Duccio Turin took up a Chair in Building Construction as part of Llewlyn Davies’ reforms of the School. Patricia Hillebrandt developed the discipline of construction economics and John Andrews led research into management issues.

In 2009 and 2011 respectively, the UCL Energy Institute and the UCL Institute for Sustainable Resources became part of The Bartlett. Both institutes have a pan-UCL focus and aim to create critical mass around the study and teaching of energy and resources at UCL.

The Institute for Global Prosperity and the Institute for Digital Innovation in the Built Environment launched in 2014 and 2016 respectively, broadening the scope of The Bartlett to have a more global and digital focus within the realms of cities and societies.

UCL Institute for Innovation and Public Purpose launched within The Bartlett on 12 October 2017. The new institute will rethink how public value is created, nurtured and evaluated, further expanding The Bartlett’s domain to that of public policy driven by public purpose, infrastructure and markets - while still correlating with The Bartlett’s history of interdisciplinarity, innovation and sustainability within its design and research.

Autumn 2017 marked the start of The Bartlett operating in a new space at Here East, situated in the Olympic Park in Stratford. Here East, formally the media centre for the 2012 Olympics, is now home to creative, digital, and tech companies, as well as educational and innovative institutions.

The Bartlett Real Estate Institute is set to launch in Here East in the near future, and will explore and investigate the meaning of real estate and the way it generates value, as the increasing growth of urban societies makes the notion of value in the built environment continually more complex.

Explore a century of radical thinking, research and collaboration at The Bartlett. Visit Bartlett100.com