A different way of seeing

From a groundbreaking experiment to teach visually impaired students to initiatives to widen participation, The Bartlett wants to open up built-environment education to a more diverse cohort. 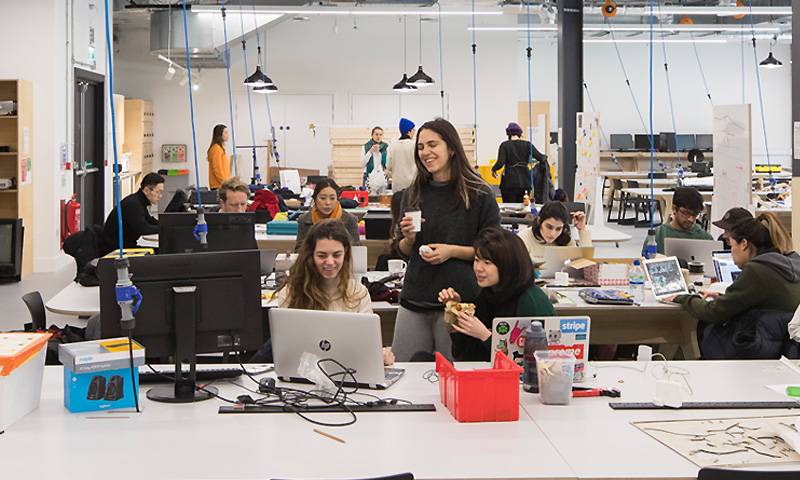 With environmental, political, social, cultural, and financial pressures intensifying, The Bartlett School of Architecture is taking steps to ensure its teaching and portfolio of programmes remains relevant, valuable, attractive and accessible. For many students, the greatest challenge is managing debt, not only over their period of study, but also in the early years of their careers. Rising costs are presenting unprecedented obstacles for those from middle- to lower-income backgrounds, and set against the extended period before they are fully salaried, alternative pathways such as apprenticeships are becoming attractive. For these reasons, among others, The Bartlett began looking into whether an alternative version of the traditional Part 1 and 2 structure might be viable, as well as desirable.

After extensive consultation with students, staff, practitioners and experts, Sara Shafiei, former Architecture BSc (ARB/RIBA Part 1) Programme Director, together with Stephen Gage, Professor of Innovative Technology, developed and proposed a radical five-year integrated Master’s degree – Architecture MSci – now recruiting its first intake of students for autumn 2020. The new degree integrates the development of architectural design skills with an understanding of the complex social and technical environments in which buildings are produced. It will run in parallel and in dialogue with the school’s Architecture Part 1 and 2 programmes.

The model includes a final year on placement in practice after four years of study, as well as a thematic integration of practice and academia from day one, giving students the opportunity to accelerate their career as an architect.

Students spend the first four years developing their understanding of architecture through a comprehensive curriculum, addressing key world issues such as social housing, climate change, sustainable cities and global health and wellbeing. Through their investigations, they will identify a research area of particular interest, which will shape their choice of practice placement. During the placement year, students will learn about architectural practice at first hand. More than 20 national and international architecture practices have contributed to the development of the programme throughout its planning and keenly await contact with the cohort in the coming years.

Architecture MSci is currently seeking RIBA and ARB accreditation for Part 1 and 2. Commenting on the programme, Shafiei says: “We’re proud to be taking a fresh approach to training tomorrow’s architects and responding to the need for alternative routes to registration. This programme reinforces our commitment as a school to train graduates for world-leading practices, responding to the global challenges of our time. It’s a radical alternative to achieving Parts 1 and 2, seeking to attract highly talented individuals, including those who might otherwise choose not to apply to study architecture at all.” 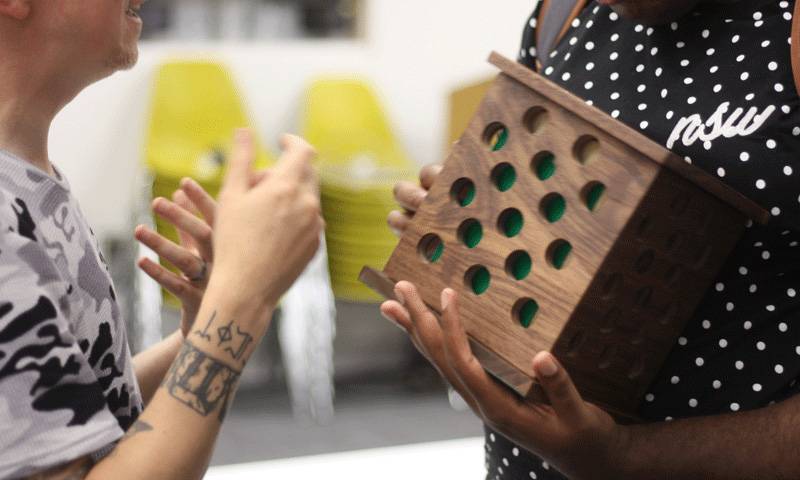 Any comprehensive programme of widening access must include those with disabilities, but developing an architecture course for blind or partially sighted people is a remarkable idea – one championed by The Bartlett’s previous Dean, Alan Penn. This is being led by Senior Lecturer Jos Boys, together with The DisOrdinary Architecture Project, a platform enabling disabled artists to work creatively with the architecture sector on improving access and inclusion.

Boys says: “He was worried that a lot of architecture education is focused on the visual. Drawings and plans are describing one particular thing about buildings: the formal, compositional aspects. You don’t have any way of recording sound or atmosphere or smell. Those things get lost. You look at acoustics but they become an add-on.” Furthermore, the usual, purely visual representations “are often incomprehensible to someone who hasn’t studied the discipline”.

So Boys and a group of blind and partially sighted artists from DisOrdinary have been co-creating and testing a course that deliberately teaches architecture beyond the visual. An initial, three-day development workshop looked at alternative modes of designing, from physical modelling to full-size body sketching, to performative audio-descriptions to drawing on paper that has been placed on a rubber mat to create a visual line on one side and a raised edge on the other. Boys says: “We were looking at what it is that matters about space, about how much blind and visually impaired people already know. They often know things and notice things that sighted people don’t.”

Following on from this, the team produced a prototype foundation study week called Architecture Beyond Sight, which took place in July 2019, led by blind American architect Chris Downey and blind Tasmanian furniture maker Duncan Meerding, with 16 blind and visually impaired students participating. “Some of these people are already studying but haven’t told anyone that they’ve got a visual impairment.” says Boys. “They are worried their tutors will stop taking them seriously. We have people in practice who, again, don’t tell their employers, they just manage the situation.” And yet visual impairments affect “10% or 15% of the population and it’s hidden. We’re hiding it from ourselves because we’re not allowing it to be part of the diversity of humanity”.

Boys hopes that such a course will be part of improving the accessibility of The Bartlett’s buildings more generally. Meerding – who works mainly in wood – and the B-Made workshop team collaborated on improving the workshops to better support blind and partially sighted students, in ways that will benefit their usability and safety for everyone. Boys also reports growing interest in a more multi-sensory appreciation of architecture from many students and staff. An audio-described tour and a sign-language tour of the degree show this year proved hugely popular, she says. “Students were beginning to see how they might not only exhibit their work but also occupy the building differently. The tutors too were open to those thoughts.” If a teaching and business model can be established, “it would be the first in the world. That would be amazing for The Bartlett. And it would mean a cultural shift everywhere.” 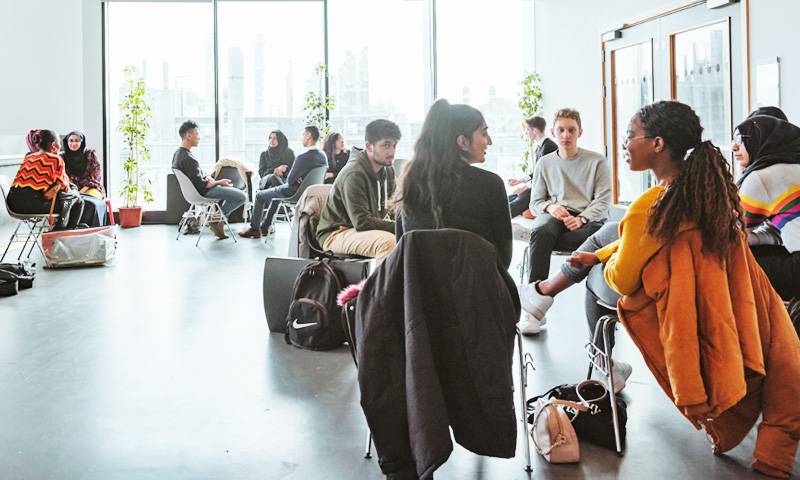 In wider society, as well as in academia, gender and racial equality have become the hottest priorities. This shift has led to the appointment of Kamna Patel, an Associate Professor in the Development Planning Unit, as The Bartlett’s Vice Dean for Equality, Diversity and Inclusion (EDI). Now one year into a three-year term, she is keen to tackle the subject from a systemic point of view, looking at loosening up the structures that reinforce inequality. “We have got to ask: ‘why do we have the system that we have?’ Otherwise we will only ever be tinkering at the edges of inequality,” she told the UCL Education Conference 2019.

Patel says: “The starting point we have taken is data led. What does UCL look like in terms of students and faculty?... When it comes to undergraduates, we tend to attract, and therefore select, from quite a narrow social cohort. It's a cohort that can afford to come to London and study in London for several years.” So there is a drive to diversify the intake, which goes beyond widening participation programmes of engagement in less advantaged schools and regions (such as Access UCL). She is looking at the way the university communicates to potential students, as well as whether potential students from The Bartlett's home city of London might see a community that reflects a broad range of ethnicities, including theirs, when they come and visit (which it currently doesn’t, says Patel, especially among teaching staff). There will also be a shift in recruitment procedures. The bland uniformity of UCAS application forms makes it harder to identify particular qualities beyond the academic that might make a candidate suitable, but postgraduate students, through their personal statements, can reveal candidates who have, for example, demonstrated resourcefulness and resilience in real life situations, says Patel.

Regarding diversity among teaching staff, Patel's research has found that shifts could be achieved through honing the curriculum to include sectors and geographical areas where a rich seam of existing BAME expertise could be found. She is also hoping to level the playing field for promotion and draws on changes that have already been made across UCL. She explains: “Previously there was a perception that the only thing that mattered was research. Now in promotion cases a fairer weighting is given to teaching and institutional work. There is an understanding that women tend to do these roles more. So rewarding that has meant making structural changes.”

She sees these changes as being not just beneficial to The Bartlett, but “beneficial for the entire industry. Construction and built-environment professions are very white and male-dominated. So how do we change that up? This is not a matter of putting diverse bodies into places and thinking things will change. When you have experienced growing up as a minority, it gives you a particular understanding of the world: it’s not just about empathy, it’s a different way of seeing. This is about harnessing that different way of seeing and valuing it, not just taking these diverse people and pushing them into a particular mould.”

All these access and diversity measures dovetail with The Bartlett Promise, an initiative instigated by previous Dean Alan Penn, to waive fees and provide a living stipend to a small cohort of students who otherwise would not have access to the school or these professions. Penn states: “My view has always been that you cannot have an excellent education without a diverse cohort.” As a legacy of The Bartlett’s centenary, which it celebrated in 2019, a more diverse and equal faculty at all levels would be hard to beat.