Design by a thousand cuts

The UK is on the verge of a major expansion in housebuilding, yet new research by the Place Alliance has revealed a chronic lack of urban design expertise in local authorities.

The UK is on the verge of a major expansion in housebuilding, yet new research by the Place Alliance has revealed a chronic lack of urban design expertise in local authorities. Will government raise its game in time? The first known use of the word ‘street’ in the English language was on 28 April 604, on a document showing the boundary of a plot of land in Rochester, where the castle and cathedral now stand. Many things have changed in Rochester during the 1,414 years since, but the line of the High Street is pretty much the same as it was then, and indeed as it was six centuries earlier when it was built by the Romans. This, says Robert Huxford of the Urban Design Group, shows how important it is to get planning right first time. “Once you’ve created a development, its effect will be there pretty much in perpetuity. Once you make a boundary between public and private land, it stays there unless money changes hands or there’s force majeure.”

“Almost half of local authorities have no dedicated in-house urban design capacity at all, and of those that do, in most cases a single officer must cover design as part of a larger role

Given the longevity of our streetscapes, you would expect that the creation of a new one would be subject to extensive consideration. But you’d be wrong. A survey of local planning authorities by The Bartlett School of Planning, part-funded by the Urban Design Group, has uncovered a chronic lack of urban design expertise within the organisations that are supposed to scrutinise new development to ensure that it’s attractive, integrated into the surrounding area and well-served by amenities such as public transport and green space. Almost half of local authorities have no dedicated in-house urban design capacity at all, and of those that do, in most cases a single officer must cover design as part of a larger role.

This should be cause for alarm under any circumstances, but it’s all the more so when the UK is supposed to be on the verge of a major expansion in housebuilding. The government wants numbers of new homes to rise from 217,000 in 2017 to 300,000 a year by 2025 to address the housing shortage. But what kind of places are we going to create, if there’s no-one to oversee these crucial elements of placemaking?

Local authorities need to realise that design quality is a requirement of the planning system, not something they can pick and choose

“Local authorities have an absolutely critical role in ensuring high standards of urban design,” says Huxford. “Unless they demand good standards, there is an inevitability that we will have a legacy of poorly designed and located development – and indeed that’s what we are getting.”

The research was led by Matthew Carmona, Professor of Planning and Urban Design at The Bartlett, and prompted by growing anecdotal evidence that cuts in local authority budgets had left planning departments understaffed and ill-equipped. This was evident in feedback received by the Place Alliance, which is run by Carmona and his colleague Valentina Giordano, but also during hearings of the House of Lords Select Committee on National Policy for the Built Environment, to which Carmona was appointed as specialist adviser. He says: “There were lots of reports about a real crisis of urban design skills within local authorities, but no concrete, empirical evidence that there was a problem.”

The last audit of this kind was carried out back in 2003, by the Commission for Architecture & the Built Environment, or CABE. After this, there was significant investment in skills and training, but this dropped off when austerity hit in 2011 and government funding to CABE ceased. Government systematically collects data on the number of planning applications and the speed of processing them, says Carmona, but not on the composition or skill levels of planning departments. “But these are the sorts of qualitative factors that determine whether the planning system can work properly.”

While speed might be important, explains Carmona, it has nothing to do with creating high-quality places. “Around the country, we see large schemes going through that are very poor quality. There are some developers that are excellent and produce amazing projects, but a lot need to be pushed. And if the local authority doesn’t do that, then nobody will.”

Ultimately, a lack of urban design expertise could thwart the government’s attempts to avert the housing crisis, he warns. “Local communities are often against new housing because they fear it will be poorly designed and unsympathetic to existing settlements. If we get the design right, local communities are much more likely to accept the new housing that the nation needs.”

The Bartlett survey, Reviewing Design Review in London, was compiled by sending freedom of information requests to 374 local planning authorities. It asked what in-house urban design skills were available within the local authority, and specifically how many qualified urban designers, landscape architects and architects were employed.

The headline figure is a 5% drop in qualified advisers since 2003, but this is almost certainly an underestimate. The comments accompanying the data refer frequently to resource sharing between departments or neighbouring authorities and to professionals from non-design backgrounds covering urban design roles. So while expertise may exist on paper, it may not be there in reality.

Valentina Giordano, Research Associate at The Bartlett School of Planning, who co-ordinated the research, was not surprised by this diminished capacity – she used to work in the private sector as an urban designer and had heard many of her former colleagues complaining about cutbacks in local authorities. “What did surprise me was the extent to which conservation officers now have to fulfil all sorts of roles,” she says. “Or maybe a planner is sent on a couple of CPDs so they can sit on a design review panel or comment on pre-application plans. Not only are people stretched, but they’re under pressure to do a job that isn’t their job.” Where local authorities have no expertise in house, it has become common practice to use external consultants on a needs-must basis, at considerable expense.

Without anyone to challenge developers, local authorities find it hard to understand the long-term implications of poor design. It’s not just a question of money: even small changes to a scheme can have a huge impact, Giordano says. “Things like the way parking is organised so that not all the public realm is tarmac, or making access routes safe by allowing for natural surveillance so people can walk to the shops.” With Carmona, she is now working on a follow-up study of attitudes to design among local councillors, and she hopes that the Place Alliance will secure funding to create a case-study library, to replace some of the CABE guidance that she and her planning colleagues used to find so invaluable.

Giordano is struck by how little public awareness there is of urban planning. “I always find it unbelievable that every time the planning minister changes it’s a non-news story. It’s quite tragic because the power that they hold is incredible, but it’s quite difficult for an ordinary citizen to realise how that power trickles down and affects the street where you live, the park where you go, the tower that you may or may not get.”

One bad decision early on has a cascade of negative impacts, says Huxford, most often the decision to allow development in areas where there are no local amenities and no alternatives to car use. Health outcomes suffer with no incentive for the residents to walk or cycle, and those without cars cannot access the services they need. Land is given over to hard surfaces for roads and parking, which increases the risk of flooding by stormwater runoff and creates a need for attenuation measures, which may reduce the amount of green space available. The retail economy shifts further in favour of car use, hindering the ability to walk or cycle elsewhere too.

“The built environment needs to be considered as a system,” he says, “and constantly tweaked and tuned and helped to change in response to human need, changes in the economy, technology and the environment and our best understanding of what makes people healthy and happy. It is in the national interest that local authorities have the expertise to do this.” 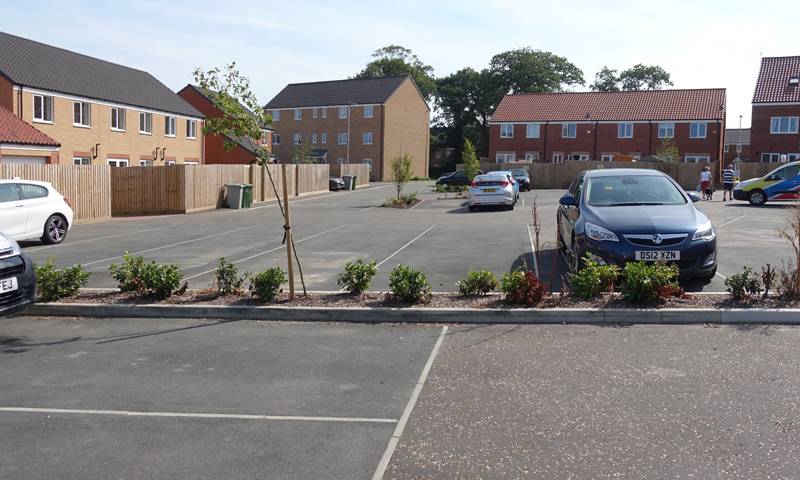 A plan for good design

The House of Lords Select Committee raised Huxford’s concerns in its 2016 report, Building Better Places. “Good design is really the key to not only pleasant places to live but also thriving communities,” says Baroness Janet Whitaker, who co-founded the select committee. “The problem is that local authorities have so few resources now and they keep being cut, hugely cut. It’s happening in so many other local authority fields – children’s centres, battered women’s centres are all suffering – so I’m not surprised they decided to cut planning. There’s no denying it that if you’ve got to cut somewhere, planning is an easy one.”

Whitaker and Carmona agree that there is no substitute for additional government funding – local authorities could be allowed to borrow more, for example, says Whitaker. But there are low or no-cost options that local authorities can take advantage of, such as external design review panels.

There was dismay earlier this year when a revised version of the National Planning Policy Framework was released for consultation, with a clause on the importance of design review substantially watered down.

After an outcry, Carmona is cautiously optimistic that the final version, due later in 2018, will stick closer to the current wording. He also thinks there is a greater willingness in government to engage with issues of design – it held a Design Quality Conference in spring 2018, the first for many years, and two civil servants have been appointed to drive the design agenda forward.

Most encouragingly, since the publication of The Bartlett’s survey, part of a new fund called the Planning Performance Grant has been dedicated to design skills in local authorities.

“Highlighting these issues and showing there’s a real need encouraged the government to shift part of the grant specifically to design,” says Carmona. “That’s a very positive impact that we’ve had.”

Stronger leadership from government is the key to creating better places, he believes: “Local authorities need to realise that design quality is a requirement of the planning system, not something they can pick and choose.” After all, governments may come and go, but urban design is pretty much forever.

Placemaking on a shoestring

As well as asking local authorities about their in-house urban design capacity, The Bartlett survey also enquired how many were making use of design review panels to assess the quality of planning applications.

In an ideal world, fully staffed planning departments would make their own assessment but refer larger schemes to panels of their peers as an additional mechanism to improve quality. Where there is no in-house capability, design review should be an essential failsafe.

In reality, only two-thirds of local authorities use it and less than a fifth regularly, meaning monthly or quarterly. Outside London and the large metropolitan areas, uptake was particularly patchy.

“One of the reasons that local authorities should be using this more is because they don’t have to pay,” says Carmona. “They can charge the developer for design review so itís a cost-neutral mechanism they can use in the absence of having people in-house.”

Planning departments can then use these resources to fund in-house capacity – hiring someone to run the panel, while providing design advice with the rest of their time. Carmona says: “That’s what an increasing number of local authorities are doing in London, and it’s what they should all be doing. It's better to have something than nothing. One person is better than none, half a person is better than nothing. You need to start somewhere.”