BiotA Lab is designing an architectural bark for buildings that has bio-receptive qualities – a stage set for cryptogams. 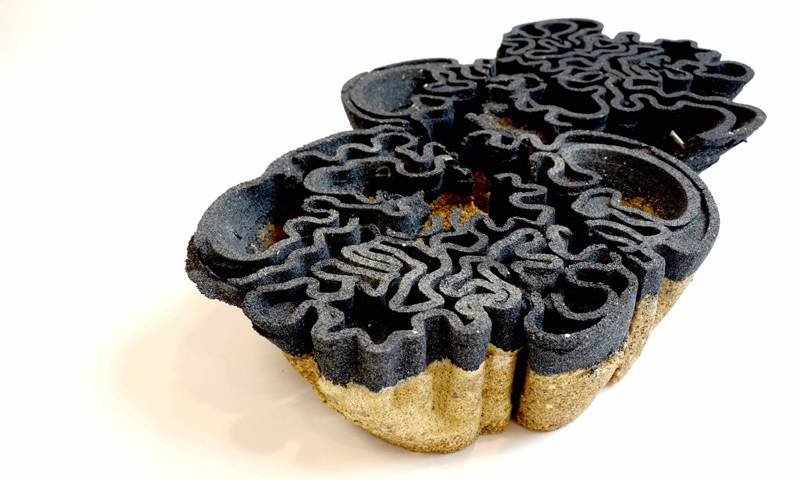 “Green walls are our friends and our enemies,” says Marcos Cruz, Professor of Innovative Environments at The Bartlett School of Architecture. “They are an important part of greening our cities, but they tend to be unsustainable.”

For Cruz, our current concept of green walls has something of the golf course about it: they should be green all the time, regardless of how the seasons change. The result is often a monoculture with little biodiversity that requires enormous amounts of maintenance and irrigation. “We need to look for an alternative,” he says, “one where species adjust to the climate and substratum as they do in nature.”

This view has fuelled a stream of work at the BiotA Lab – a cluster that Cruz leads within the School of Architecture – experimenting with the idea of living concrete, and has inspired two pilot projects with Transport for London (TfL). BiotA Lab has taken the classical architecture concept of a building’s “skin” and reinterpreted it as “bark”. Cruz explains: “Bark, conceptually different from skin, is not just defensive or decorative, but a three-dimensional host for a self-regulating ecology.”

Every external building surface becomes bio-colonised at some point in time; how much so depends on its bio-receptivity, such as its porosity, roughness and pH level. If conditions are right, cryptogams – an umbrella name for species such as algaes, mosses and lichens that propagate via spores – will take over. “They are pioneers,” says Cruz, “and spores are everywhere in the air. The clever thing about these species is that during drought,  many of them don’t die, they just become dormant. So, as soon as they get a bit of water again, they reanimate – making them virtually indestructible.”

Which is why TfL is interested. Bioreceptive walls have the potential to do away with costly maintenance and, what’s more, cryptogams are capable of absorbing vast amounts of pollutants from the air. BiotA Lab’s first pilot project for TfL will run on a retaining wall on a disused platform at East Putney station. A second pilot, at a school in Oval, will explore how the morphology of the bio-receptive design reduces noise from a busy main road running alongside the school playground.

These ideas are also the starting point for a new, two-year Master’s programme in Bio-Integrated Design beginning in 2018 that will bring together architecture and biochemical engineering, encompassing work from the cellular scale to that of buildings.