The majority of stars in the Galaxy (and presumably the Universe), form as pairs of stars known as binaries.  Binary stars play a central role in several areas of fundamental astrophysics: stellar masses, mass transfer, supernovae, and gamma-ray bursts.  Binaries containing at least one white dwarf are known to play a critical role in Type Ia supernovae, which provide insight into the structure and evolution of the Universe.

Binaries composed of a white dwarf and main-sequence star are relatively simple systems.  These systems can provide dynamical masses for nearby stars (e.g. Sirius, Procyon) and independent age constraints for nearby stellar systems.

The majority of such systems contain a low-mass, M-type main-sequence star companion; the white dwarf dominates the blue and ultraviolet light while the red dwarf outshines at infrared wavelengths.  In these systems, the low-mass companion has either spiraled inward due to friction with the expanding envelope of the giant star (before evolving into a white dwarf) or migrated further outward from an initially wide orbit due to the mass lost by the giant. 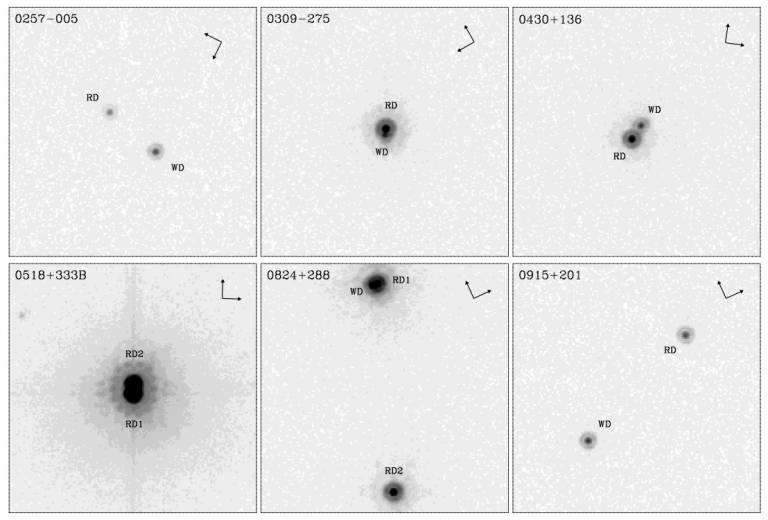 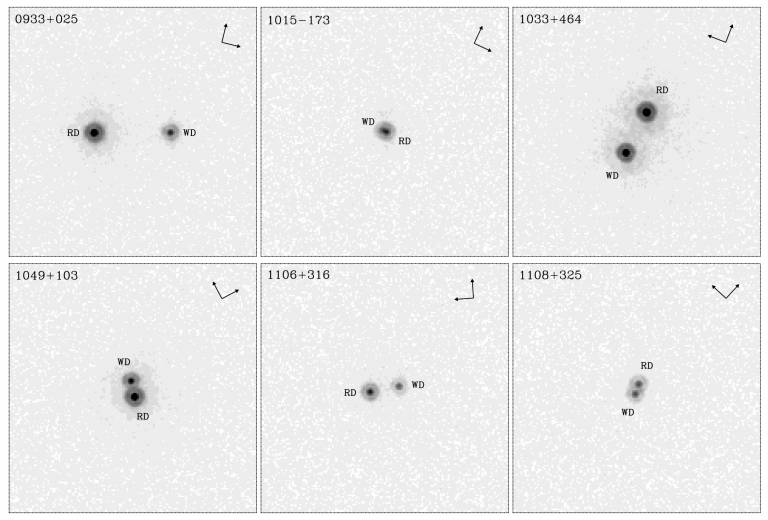 Figures: Images taken with the Hubble Space Telescope of several white dwarf plus red dwarf binaries, demonstrating a large fraction have relatively wide orbits that can be spatially resolved.  Not shown are approximately 1/4 of the targets that are point sources to the sensitivity of Hubble, and implying their orbital periods are on the order of days or shorter.

The difference between these two orbital populations provides information on the energy and mass budget of the mass loss envelope, and can provide insight into the progenitors of Type Ia supernovae.  Lastly, the white dwarf can sometimes capture the wind of its companion star, and provide a measurement of the stellar wind rate and any unusual chemistry.

There are opportunities to study numerous systems coming from the Sloan Digital Sky Survey, and these can be followed up from the ground using Lucky Imaging or Adaptive Optics.

Interestingly, there are a growing number of white dwarfs being discovered via high-contrast, direct imaging as bound companions to planet-hosting, main-sequence stars.  These systems yield additional constraints on planetary systems such as age, planet formation efficiency as a function of mass and dynamical evolutionary history.

UCL carries out research on binary star systems in many forms, and there are currently opportunities to observe evolved binaries to understand mass transfer, orbital evolution, Galactic chemical evolution, and even the fate of planetary systems.