Slow spin of early galaxy observed for the first time

One of the most distant known galaxies, observed in the very earliest years of the Universe, appears to be rotating at less than a quarter of the speed of the Milky Way today, according to a new study involving UCL researchers - our very own Prof. Richard Ellis and team. 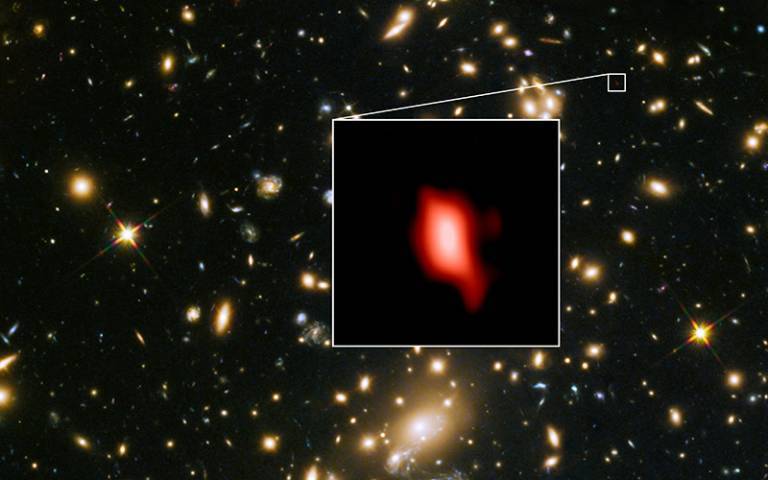 For the study, published in The Astrophysical Journal Letters, an international team of researchers analysed data from a galaxy known as MACS1149-JD1 (JD1), obtained from observations by the Atacama Large Millimeter/submillimeter Array (ALMA), an assembly of radio telescopes in Chile.

The galaxy is so far away that its light comes to us from a time when the Universe was only 550 million years old – 4% of its present age.

The researchers, led by Tsuyoshi Tokuoka of Waseda University in Japan, found subtle variations in the wavelengths of the light indicating that parts of the galaxy were moving away from us while other parts were moving towards us. From these variations, they concluded that the galaxy was disc-shaped and rotating at a speed of 50 kilometres a second. By contrast, the Milky Way, at the Sun’s position, rotates with a speed of 220 kilometres per second today.

From the size of the galaxy and the speed of its rotation, the researchers were able to infer its mass, which in turn enabled them to confirm that it was likely 300 million years old and therefore formed about 250 million years after the Big Bang.

Co-author Professor Richard Ellis (UCL Physics & Astronomy) said: “This is by far the furthest back in time we have been able to detect a galaxy’s spin and, most importantly, confirm its mass. It allows us to chart the development of rotating galaxies over 96% of cosmic history – rotations that started slowly initially, but became more rapid as the Universe aged.

“These measurements support our earlier findings that this galaxy is well-established and likely formed about 250 million years after the Big Bang. On a cosmic time scale, we see it rotating not long after stars first lit up the Universe.”

Co-author Dr Nicolas Laporte (University of Cambridge) said: “Our findings shed light on how galaxies assembled in the early Universe. We see that, 300 million years after massive hydrogen clouds condensed and fused into stars, a galactic disc has developed and the galaxy has acquired both its shape and rotation.”

Co-author Professor Akio K. Inoue (Waseda University, Tokyo) said: “Determining whether distant galaxies are rotating is very challenging because they only appear as tiny dots in the sky. Our new findings came thanks to the extraordinarily high resolution achieved by combining the 54 radio telescopes of the ALMA observatory.”

The further away a galaxy is from Earth, the faster it appears to move away from us. As objects moving away emit light shifted towards longer wavelengths (“redshifted”), this means we can calculate their distance, and in turn their age, from the extent of “redshift”.

Past studies have found JD1’s redshift to be 9.1, meaning what we see is from when the Universe was 550 million years old. In the latest study, the team picked out variations in the redshift across the galaxy, indicating differences in the speed at which the galaxy was moving away from us, meaning that, relatively speaking, one side was moving away while the other side was moving closer.

This mass is consistent with the galaxy being about 300 million years old, with most of the mass coming from mature stars that formed close to the start of the galaxy’s life.

The finding supports earlier evidence from UCL’s Professor Ellis and colleagues, who came up with the same age estimate for JD1 in a paper published last year, using a different technique based on the brightness of light at various frequencies. They determined the age of six galaxies including JD1, concluding that cosmic dawn – the moment stars first lit up the Universe – occurred 200 to 300 million years after the Big Bang.

Image: Hubble Space Telescope image of the foreground cluster of galaxies MACS 1149 with a zoom inset on the background galaxy JD1. The cluster acts as a gravitational lens magnifying the brightness of JD1 by a factor of 5. JD1 is one of the most distant galaxies known, seen when the universe was only 550 million years old.