Studying the violent collisions of black holes and neutron stars may soon provide a new measurement of the Universe’s expansion rate, helping to resolve a long-standing dispute, suggests a new simulation study led by our very own Dr Stephen Feeney and Prof. Hiranya Peiris. 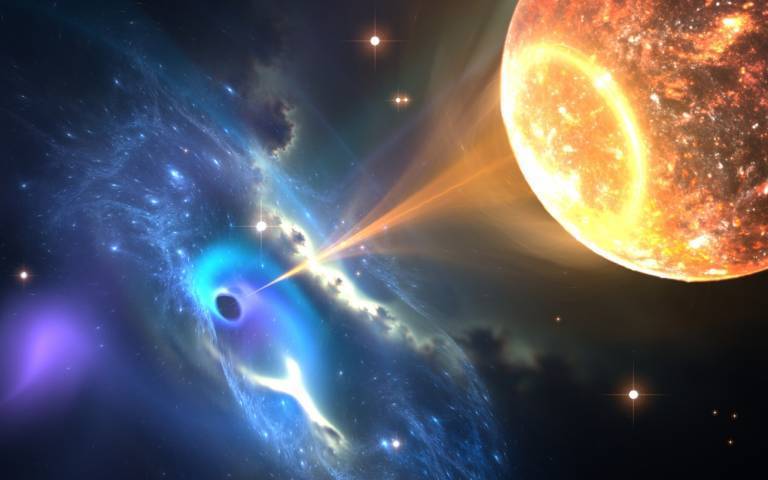 Our two current best ways of estimating the Universe’s rate of expansion – measuring the brightness and speed of pulsating and exploding stars, and looking at fluctuations in radiation from the early Universe – give very different answers, suggesting our theory of the Universe may be wrong.

A third type of measurement, looking at the explosions of light and ripples in the fabric of space caused by black hole-neutron star collisions, should help to resolve this disagreement and clarify whether our theory of the Universe needs rewriting.

The new study, published in Physical Review Letters, simulated 25,000 scenarios of black holes and neutron stars colliding, aiming to see how many would likely be detected by instruments on Earth in the mid- to late-2020s.

The researchers found that, by 2030, instruments on Earth could sense ripples in space-time caused by up to 3,000 such collisions, and that for around 100 of these events, telescopes would also see accompanying explosions of light.

They concluded that this would be enough data to provide a new, completely independent measurement of the Universe’s rate of expansion, precise and reliable enough to confirm or deny the need for new physics.

Lead author Dr Stephen Feeney (Astrophysics, UCL Physics & Astronomy) said: “A neutron star is a dead star, created when a very large star explodes and then collapses, and it is incredibly dense – typically 10 miles across but with a mass up to twice that of our Sun. Its collision with a black hole is a cataclysmic event, causing ripples of space-time, known as gravitational waves, that we can now detect on Earth with observatories like LIGO and Virgo.

“We have not yet detected light from these collisions. But advances in the sensitivity of equipment detecting gravitational waves, together with new detectors in India and Japan, will lead to a huge leap forward in terms of how many of these types of events we can detect. It is incredibly exciting and should open up a new era for astrophysics.”

To calculate the Universe’s rate of expansion, known as the Hubble constant, astrophysicists need to know the distance of astronomical objects from Earth as well as the speed at which they are moving away. Analysing gravitational waves tells us how far away a collision is, leaving only the speed to be determined.

To tell how fast the galaxy hosting a collision is moving away, we look at the “redshift” of light – that is, how the wavelength of light produced by a source has been stretched by its motion. Explosions of light that may accompany these collisions would help us pinpoint the galaxy where the collision happened, allowing researchers to combine measurements of distance and measurements of redshift in that galaxy.

Dr Feeney said: “Computer models of these cataclysmic events are incomplete and this study should provide extra motivation to improve them. If our assumptions are correct, many of these collisions will not produce explosions that we can detect – the black hole will swallow the star without leaving a trace. But in some cases a smaller black hole may first rip apart a neutron star before swallowing it, potentially leaving matter outside the hole that emits electromagnetic radiation.”

Co-author Professor Hiranya Peiris (Astrophysics, UCL Physics & Astronomy and Stockholm University) said: “The disagreement over the Hubble constant is one of the biggest mysteries in cosmology. In addition to helping us unravel this puzzle, the spacetime ripples from these cataclysmic events open a new window on the universe. We can anticipate many exciting discoveries in the coming decade.”

Gravitational waves are detected at two observatories in the United States (the LIGO Labs), one in Italy (Virgo), and one in Japan (KAGRA). A fifth observatory, LIGO-India, is now under construction.

Our two best current estimates of the Universe’s expansion are 67 kilometres per second per megaparsec (3.26 million light years) and 74 kilometres per second per megaparsec. The first is derived from analysing the cosmic microwave background, the radiation left over from the Big Bang, while the second comes from comparing stars at different distances from Earth – specifically Cepheids, which have variable brightness, and exploding stars called type Ia supernovae.

Dr Feeney explained: “As the microwave background measurement needs a complete theory of the Universe to be made but the stellar method does not, the disagreement offers tantalising evidence of new physics beyond our current understanding. Before we can make such claims, however, we need confirmation of the disagreement from completely independent observations – we believe these can be provided through black hole-neutron star collisions.”

The study was carried out by researchers at UCL, Imperial College London, Stockholm University and the University of Amsterdam. It was supported by the Royal Society, the Swedish Research Council (VR), the Knut and Alice Wallenberg Foundation, and the Netherlands Organisation for Scientific Research (NWO).