The Institute of Physics has awarded medals to our very own Professor Richard Ellis and Dr Maggie Aderin-Pocock in recognition of their outstanding contributions to physics. 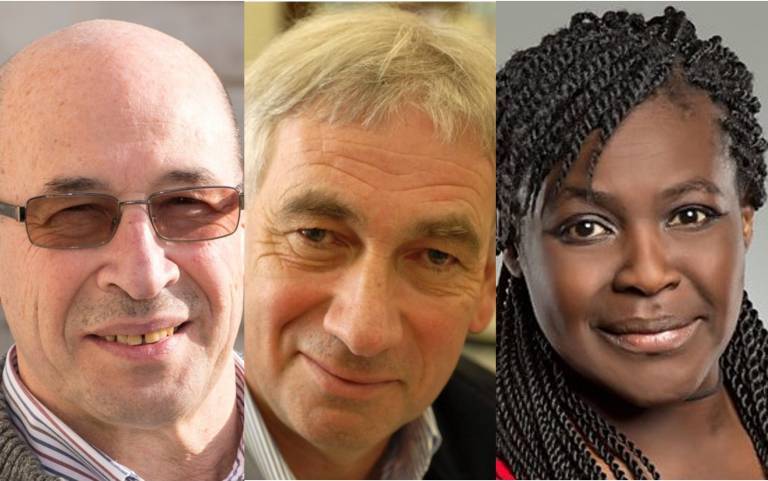 Our very own Professor Richard Ellis CBE has been awarded the Institute’s Michael Faraday Gold Medal and Prize for outstanding and sustained contributions in experimental physics.

Richard’s pioneering work in faint object astronomy, often with instruments he funded and constructed, has opened up the early universe to direct observation.

Using the Hubble, Keck and European VLT telescopes, Professor Ellis undertook the most ambitious galaxy surveys to date. Via heroic exposures, he demonstrated the evolution of galaxies back to less than 300 million years after the Big Bang.

He has inspired many generations of young observers and championed the case for a number of international astronomical facilities, including the shortly to be launched James Webb Space Telescope.

Our Honorary Senior Research Associate Dr Maggie Aderin-Pocock has been awarded the William Thomson, Lord Kelvin Medal and Prize for exceptional services to science education and physics communication, including her inspirational work with thousands of school students as well as expert opinion on radio and television.

In addition, Professor Alexander Shluger (UCL Physics & Astronomy and the London Centre for Nanotechnology) has been awarded the David Tabor Medal and Prize for his seminal and wide-ranging contributions to surface and nanoscale physics.

He has developed new theoretical models of atomic force microscopy (AFM), a type of scanning probe that allows the properties of a material to be explored at nanoscale.

These models have furthered our understanding of a range of mechanisms involved in AFM imaging, providing deep insights into the roles of AFM tip structure, surface distortion and atomic dynamics in image formation, and the atomistic origins of friction. His models have set the standard for the interpretation of AFM images.

Professor Shluger has also developed atomic-scale models of defects at the surfaces and interfaces of insulators and how these interfaces are modified by electronic excitation and carrier injection.

Professor David Price, UCL Vice-Provost (Research), said: “I congratulate Professor Ellis, Professor Shluger and Dr Aderin-Pocock on these awards. Their careers exemplify the power of leading-edge research to shine a light on our world, whether at the atomic scale, looking back to the beginning of time, or inspiring students to become the scientists of tomorrow.”