The Dark Energy Spectroscopic Instrument (DESI), the construction of which UCL has had an important role in, opened to the sky for the first time on 1st April 2019, producing high quality images through its wide field corrector lens system. 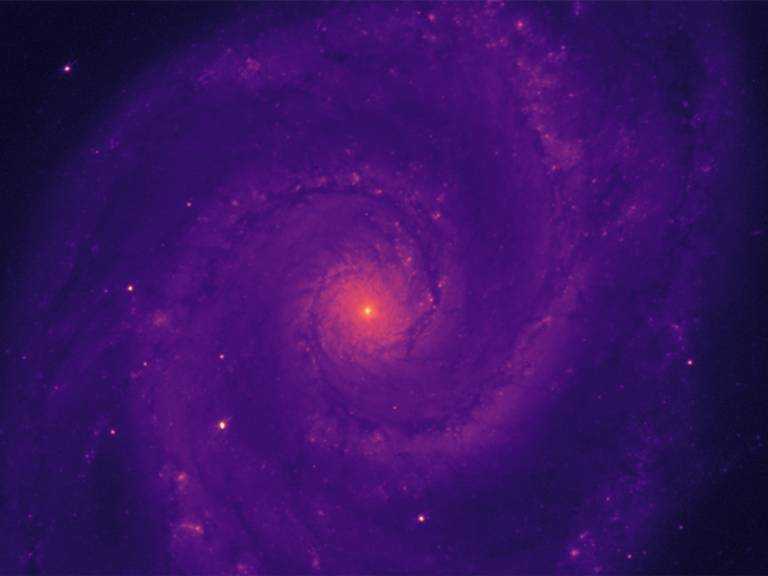 The DESI instrument is designed to study the large scale structure of the universe and its dark energy and dark matter contents to a high precision. First light for the corrector marks a major milestone in the commissioning of the system on the Mayall telescope at the National Science Foundation’s Kitt Peak National Observatory near Tucson, Arizona.

UCL has played a key role in the design and construction of the corrector, which was assembled and aligned in the UCL’s Physics & Astronomy department by a team consisting of David Brooks and Peter Doel, members of the astronomical instrumentation group. The corrector is made of six lenses, ranging from 0.8-1.1m in diameter, which needed to be aligned to the accuracy of less than the width of a hair. "It is very satisfying to see the first images from the DESI instrument. This marks an important milestone for the project and for UCL's involvement in the design and assembly of the DESI optics." said Doel.

DESI's array of 5,000 independently swivelling robotic positioners, each carrying a thin fibre-optic cable, will automatically move into pre-set positions with accuracy to within several microns (millionths of a meter). Each positioner is programmed to point its fibre-optic cable at an object to gather its light.
That light will be channelled through the cables to a series of 10 devices known as spectrographs that will separate the light into thousands of colours. The light measurements, known as spectra, will provide detailed information about objects' distance and the rate at which they are moving away from us, providing fresh insight about dark energy.

DESI's lenses are housed in the corrector which is attached above the telescope's primary mirror, and the corrector is moved and focused by a surrounding device known as a hexapod.

Dr David Brooks, who has also constructed this and other optics systems for other telescopes, says: "The images from DESI prove yet again that UCL's Optical Science Laboratory is at the forefront in design and construction of astronomical instrumentation.”

Professor Ofer Lahav, who chairs the DESI: UK consortium, commented “The DESI first light is an important step towards mapping the 3D distribution of 35 Million galaxies and quasars, leading to accurate measurements of Dark Energy and Dark Matter.”

UCL's cosmology group are also heavily involved in the planning and science exploitation of the data that will be produced when the instrument begins this year its 5-year survey.

"DESI will also provide a huge map of the distribution of gas in the Universe", says Dr. Andreu Font-Ribera, lecturer at UCL and a member of the DESI Science Committee. "With this map we will be able to measure very accurately the expansion of the Universe 10 billion years ago, when the Universe was only one fifth of its current age."