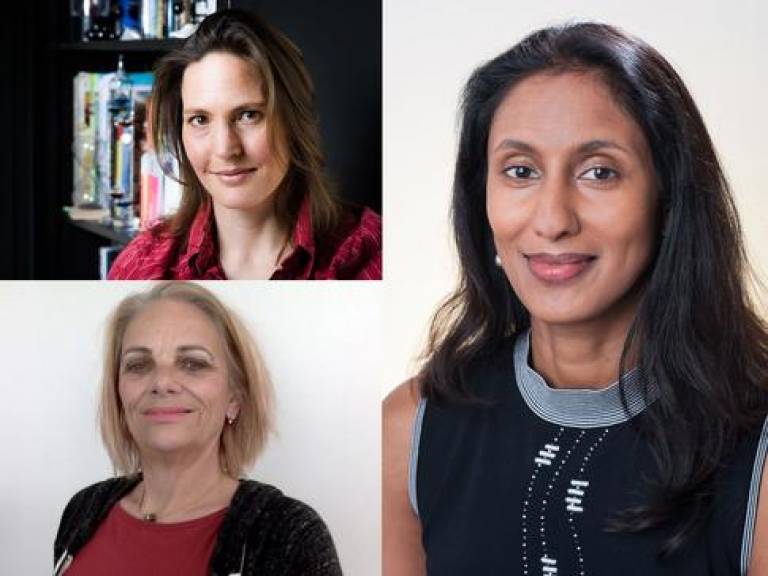 Professor Hiranya Peiris, Dr Helen Czerski and Professor Jennifer Thomas have been awarded medals and prizes by the Institute of Physics (IOP) for their outstanding, sustained and distinguished contributions to physics.

Each year, the IOP recognises and rewards excellence in individuals and teams who have made a contribution to physics in the UK and Ireland.

The awards reflect the breadth of work in the physics community - spanning academia, industry, education and outreach. This year, three of the 22 prizes were won by UCL researchers.

Professor Jennifer Thomas CBE (UCL Physics & Astronomy) has received the Michael Faraday Medal and Prize for her outstanding investigations into the physics of neutrino oscillations and, in particular, her leadership of the MINOS/MINOS+ long-baseline neutrino oscillation experiment.

Elected a fellow of the Royal Society last year, Professor Thomas, has been further recognised for her pioneering work in high-energy particle physics and in particular, her major contributions to the study of neutrinos.

She has played a leading role in detector development, pushing novel applications of and innovations in tracking detectors including a system to apply mobile technology to photon detector readout.

Dr Helen Czerski (UCL Mechanical Engineering) has been awarded the William Thomson, Lord Kelvin Medal and Prize for her contributions to championing the physics of everyday life to a worldwide audience of millions through TV programmes, a popular science book, newspaper columns and public talks.

Dr Czerski is foremost a physicist and oceanographer but is also a BBC presenter and author. She studies how bubbles formed by breaking waves contribute to the mechanisms at the ocean surface and connects this understanding of bubble physics with the influence that bubbles have on our planet.

Through her programmes and books, Dr Czerski shares her enthusiasm for science, passionately conveying the beauty and ingenuity of our physical world and the perspective on the world that science provides.

Professor Hiranya Peiris (UCL Physics & Astronomy) has been recognised with the Fred Hoyle Medal and Prize for furthering our understanding of the origin and evolution of the cosmos.

Joint winner of the 2018 Breakthrough Prize, Professor Peiris conducts world-leading research that has significantly shaped our understanding of the origin of cosmological structure seeded in the first moments of the Universe.

She led the first paper testing theories of the early Universe with seminal WMAP cosmic microwave background observations, work that redefined the boundary between cosmology and high-energy physics, and is a pioneer in the emerging field of astrostatistics.

In addition to her research achievements, the IOP identified Professor Peiris' outreach work as outstanding, placing her amongst the very best advocates for cosmology.

Commenting on the 2018 awards, IOP President, Professor Dame Julia Higgins said: "It is a pleasure for me to recognise and celebrate today exceptional physics by exceptional individuals.

"This is how IOP - representing the whole physics community - honours those who produce the very best work. And it is this work that directly contributes to our economy, our everyday lives and towards tackling some of the biggest challenges we face in society. I would like to offer my warmest congratulations to all our winners."

Professor David Price, UCL Vice-Provost (Research) said: "This is an outstanding achievement, and I'd like to extend my congratulations to Professor Thomas, Dr Czerski and Professor Peiris. We're delighted that their achievements in furthering our understanding of physics both within the academic community and with wider audiences have been recognised by the Institute of Physics and by their peers.

"Their dedication and commitment to ground breaking research has led to great progress in the field, and exemplifies UCL's commitment to delivering impact for public benefit through academic excellence."