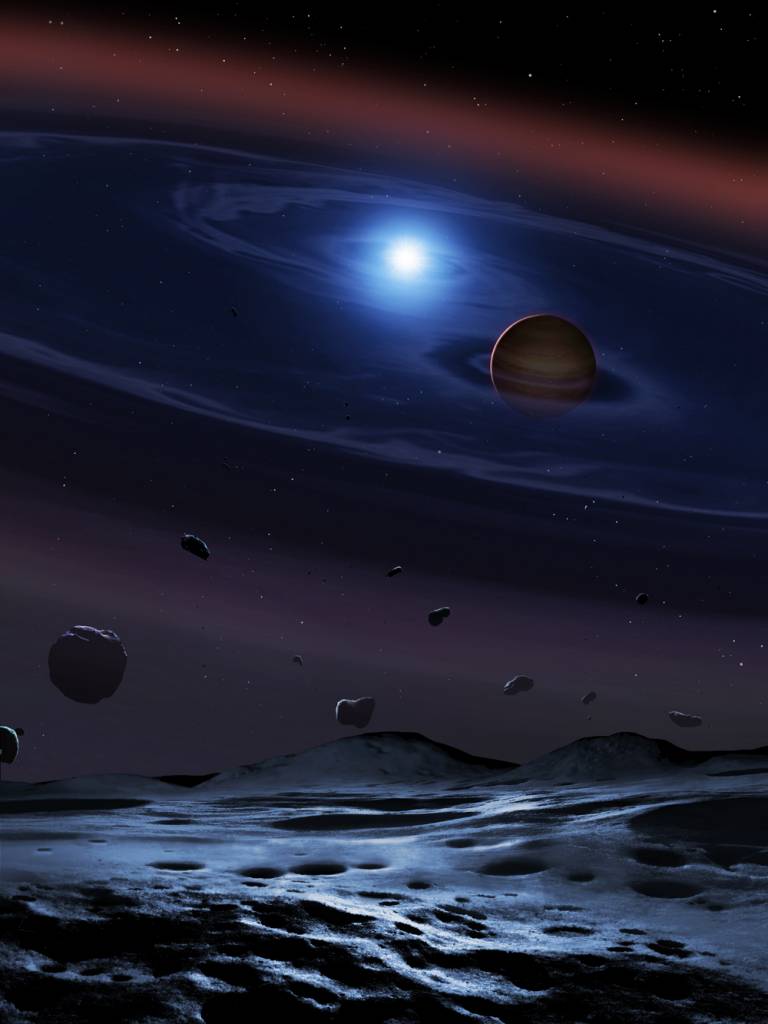 Evidence of planetary debris surrounding a double sun, 'Tatooine-like' system has been found for the first time by a UCL-led team of researchers.Published on the 27th Feb 2017 in Nature Astronomy and funded by the Science and Technology Facilities Council and the European Research Council, the study reports on the remains of shattered asteroids orbiting a double sun consisting of a white dwarf and a brown dwarf roughly 1000 light-years away in a system called SDSS 1557.

The discovery is remarkable because the debris appears to be rocky and suggests that terrestrial planets like Tatooine - Luke Skywalker's home world in Star Wars - might exist in the system. To date, all exoplanets discovered in orbit around double stars are gas giants, similar to Jupiter, and are thought to form in the icy regions of their systems.

In contrast to the carbon-rich icy material found in other double star systems, the planetary material identified in the SDSS 1557 system has a high metal content, including silicon and magnesium. These elements were identified as the debris flowed from its orbit onto the surface of the star, polluting it temporarily with at least 1017 g (or 1.1 trillion US tons) of matter, equating it to an asteroid at least 4 km in size.Lead author, Dr Jay Farihi (UCL Physics & Astronomy), said: "Building rocky planets around two suns is a challenge because the gravity of both stars can push and pull tremendously, preventing bits of rock and dust from sticking together and growing into full-fledged planets. With the discovery of asteroid debris in the SDSS 1557 system, we see clear signatures of rocky planet assembly via large asteroids that formed, helping us understand how rocky exoplanets are made in double star systems."

In the Solar System, the asteroid belt contains the leftover building blocks for the terrestrial planets Mercury, Venus, Earth, and Mars, so planetary scientists study the asteroids to gain a better understanding of how rocky, and potentially habitable planets are formed. The same approach was used by the team to study the SDSS 1557 system as any planets within it cannot yet be detected directly but the debris is spread in a large belt around the double stars, which is a much larger target for analysis.

The discovery came as a complete surprise as the team assumed the dusty white dwarf was a single star but co-author Dr Steven Parsons (University of Valparaíso and University of Sheffield), an expert in double star (or binary) systems noticed the tell-tale signs. "We know of thousands of binaries similar to SDSS 1557 but this is the first time we've seen asteroid debris and pollution. The brown dwarf was effectively hidden by the dust until we looked with the right instrument", added Parsons, "but when we observed SDSS 1557 in detail we recognised the brown dwarf's subtle gravitational pull on the white dwarf."

The team studied the binary system and the chemical composition of the debris by measuring the absorption of different wavelengths of light or 'spectra', using the Gemini Observatory South telescope and the European Southern Observatory Very Large Telescope, both located in Chile.

Co-author Professor Boris Gänsicke (University of Warwick) analysed these data and found they all told a consistent and compelling story. "Any metals we see in the white dwarf will disappear within a few weeks, and sink down into the interior, unless the debris is continuously flowing onto the star. We'll be looking at SDSS 1557 next with Hubble, to conclusively show the dust is made of rock rather than ice."