This month we catch up with Professor Peter Swaab from UCL Department of English. Peter, who recently persuaded Penguin to re-publish Warner's work as Modern Classics, tells us why much of his work today is Warner-centric, including his new book on the novelist. 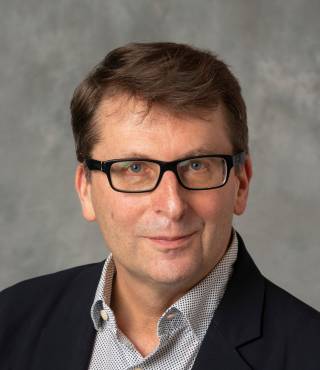 Hello Peter. We hear that you are quite the fan of Sylvia Townsend Warner. Can you tell us a bit about her work and why you enjoy her novels so much?

She wrote seven novels between 1926 and 1954, along with a prolific output of short stories, poetry and essays. The novels combine the appeal of romantic and classical writing. The early ones are better known. They're about people escaping their cages, making new lives for themselves, whether as a home counties English witch, a South Seas missionary, or a Parisian lesbian revolutionary. The non-conformism has a romantic appeal, but alongside it runs a very detailed funny ironic strain of local observation. In Lolly Willowes the title character escapes from genteel drudgery with her brother’s family in London and becomes a witch in Buckinghamshire, but the witches and warlocks wouldn't be out of place in British villages from Jane Austen to the Vicar of Dibley. Warner is a fantasist but a historian too, she is utopian about change but hard-headed about the world as it is, she mixes the weird and wonderful with the material and ordinary.

The stories often don't end up where you think they're going.  After the Death of Don Juan (1938) is set in Spain in the 1770s; it starts as a comedy of manners but becomes a tragedy about a failed political uprising, for Warner an allegory of the Spanish Civil War. She was herself an ardent supporter of the Spanish republicans, a vigorous fund-raiser and helper of refugees, an organizer of meetings and rallies.

Her last two novels are large-scale stories of groups of people in times of social change – the Black Death pandemic in The Corner That Held Them, the Industrial Revolution in the Flint Anchor. They don't look like Joyce or Stein or Woolf, but it makes sense to see them as experimental novels. The point of view moves dynamically from one figure to others within a page or a paragraph, without a stable sense of foreground and background.

We understand you recently persuaded Penguin to re-publish Warner’s work as Modern Classics? What inspired you to do this?

Because they are classics; I want them to be better known. Penguin has a worldwide distribution, and it was especially pleasing that they agreed to publish all seven novels as against cherry-picking the more marketable titles. In my own early days as a reader Penguin represented for me the nearest thing to a literary canon. I wonder now if the word ‘canon’, with its metaphor from dogmatic religious authority, is a useful one – the more expandable ideas of ‘readership’ and ‘curriculum’ seem more accurate as well as more dynamic – but I still think that if an author is published by Penguin that counts for something. Becoming an A level set text is probably the next big step for Warner, along with screen adaptations (some are said to be in the works).

It was recently announced you are writing a book about Warner. Can you tell us more about this? What was the motivation for the book?

Claire Harman has written a very good biography of Warner, but as yet there is no monograph on her work. I’m writing one titled Sylvia Townsend Warner and the Possibilities of Freedom. My book has two aims, first an exploration of her oeuvre from the perspective of the great protean theme of freedom, second a critical advocacy of a brilliant undervalued author.

Does Warner feature in any of your other academic work?

I’ve been editor of the Sylvia Townsend Warner Journal since 2015, when UCL Press agreed to take it on as an open access online publication – along with very usefully making the previous issues freely available in digital form. The Journal aims at a crossover readership of scholars and non-academic admirers, a crossing over that’s probably harder to manage now than it was when the Journal started in 2000 but seems to me an important part of what universities can do. We often present unpublished manuscripts from the Warner archive in Dorset, including in the most recent issue her unfinished sequel to The Corner That Held Them. Much of my writing and lecturing is Warner-centric these days, including a panel at the South Bank Poetry Centre, online international zoom occasions in our Covid times, and last month an item on the Today programme on Radio 4. I also teach her books to undergraduates and postgraduates when I can persuade the department’s twentieth-century syllabus-minders to include them. Plenty of students have been very enthusiastic and asked why they hadn’t heard of Warner before.

Can you describe Warner’s work in five words for us?

Here are four and a phrase: non-conformist; utopian; sceptical; original; alive with what she once called ‘the oddness of the world and the surprisingness of mankind’.