Ellis Parkinson (UCL Slade School of Fine Art) has been announced as the winner of the Provost’s portrait competition to commemorate the end of UCL Provost Michael Arthur's term of office. We catch up with Ellis to hear more about the commission and his approach to the brief. 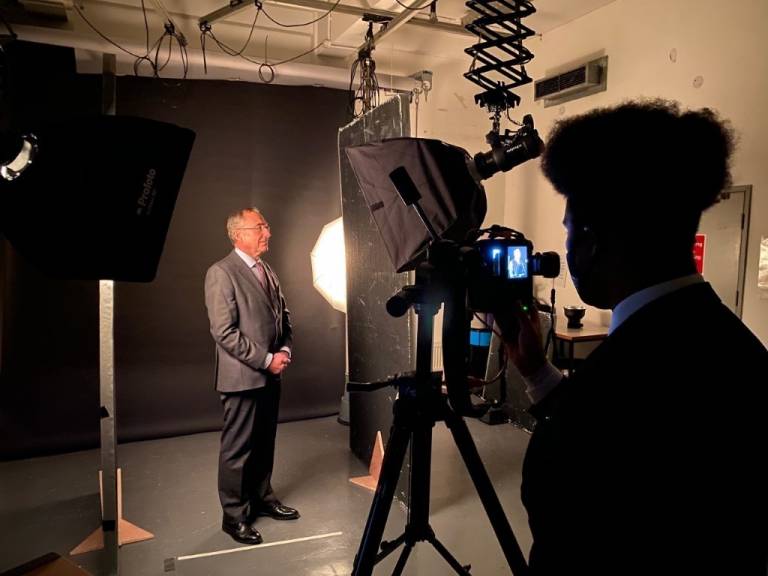 UCL’s current President & Provost, Professor Michael Arthur, will be stepping down from his role at the university at the end of this month after seven years. To commemorate the Provost’s departure, one of UCL’s distinguished Hong Kong alumni, Vincent Cheung, has generously sponsored the Slade School of Fine Art to offer a photo portrait of the Provost as a gift.

Earlier this term, UCL Slade School of Fine Art put out an open call to Slade students for submissions for the Provost Portrait competition. Applicants had to write a short artist statement, outline their proposal for the shoot and how it would be relevant to their art research, and supply a portfolio of 10 images that were relevant to the competition brief.

We would like to wish a huge congratulations to Slade undergraduate Fine Art Media student, Ellis Parkinson, for his winning proposal. Ellis' winning submission received the prize of £5000, and runners up prizes of £250 were awarded.

We caught up with Ellis to hear about the commission and how he approached the brief.

What is the concept behind the commission?

When considering the brief of this task, I thought a lot about where we are today as individuals. How quickly things can change, how important our individual actions are and can be, as well as how significant of a moment we find ourselves in, socially and politically. I thought about a number of processes that I felt reflected this feeling and the one I considered the best is that of Tintype Photography. I wanted to counter the impermanence and uncertainty of our current moment with something tangible, with something that will last for generations to come.

Today the Tintype is considered a non-standard method by which to capture photos, but their fine quality and rich history speak exactly to an aesthetic which I consider model for a situation such as commemorating the proverbial changing of the UCL guard. The Tintype is an honest method of photographic production; it refuses to glaze over imperfections and bares all to the world, something that I feel is very important not just in terms of the current moment, but also when evaluating prominent figures within an institution such as UCL.

Can you tell us about the photography technique you are using?

The creation of a Tintype is a highly unpredictable process; the slightest chemical imbalance, light exposure or miscalculation can destroy the photo, which under normal circumstances is lost permanently. A Tintype Photograph is taken in multiple stages. The first is to coat a sheet of metal, most commonly 4x5 inches or 8x10 inches, in Collodion emulsion. This part of the process is usually done in a darkroom as the emulsion is light sensitive and the sheet is placed in a sleeve so that no unwanted light is able to reach the plate. The plate is then loaded into the photographic bellowes. Next, the shot is choreographed and appropriately lit. Collodion has a very low ISO, so lighting will be key when the photo is taken. Once the shutter is hit, the subject is flooded with light and the photographic portion of the process is over. The plate is then encased in its sleeve and returned to the darkroom. Afterwards, it is coated in a developer keyed to the emulsion’s ISO until the negative image begins to reveal itself. The solution is then washed off to prevent overexposure and submerged in a liquid fixative under direct UV light, and with that, you have a fully formed Tintype photograph. The Tintype is a photographic process that has a particularly prolific and diverse history, some of which UCL itself is directly entangled in. I felt that by conducting a portrait in this way, I am fully embodying the UCL verbage of ‘Understanding the past, Challenging the Present and Shaping the Future’.

How does this commission relate to your art practice?

First and foremost, my practice is formed around creating outcomes that I have a personal interest and attachment to, the defining factor here being the opportunity to create a piece reflective of historical methods of artistic production in a modern setting. Whilst researching the Tintype process I became enamored with its history, and the multicultural view it presented me of America in the 1800s. In a time that the media would have you believe was dominated by white leaders and figures of significance, I saw black and native American men, women and children who contributed just as much to the construction, image and aesthetic of the period as anybody else. The history of the Tintype is representative of a multicultural inclusion that has been overwritten and should be celebrated, rather than forgotten.

Something that I have always maintained within my practice is a diverse and eclectic portfolio that is fueled by continual experimentation and pushing of the boundaries – visually, practically and ideologically. Experimentation is one of the core tenets of my practice. As well as this much of my working practice whilst I have been a student here has revolved around deconstructing institutional barriers and being able to interact with someone at the apex of our academic structure will surely inform this aspect of my working practice.