London is one of the most culturally vibrant cities in the world. The London Quarter looks at the city through an Arts & Humanities lense to put together these great highlights.

Take a look at some of London's cultural highlights below. Across the city, and especially around our Bloomsbury campus, there are several world-renowned free art galleries, libraries and museums.

We've curated a series of podcasts from leading academics in the Faculty of Arts & Humanities. You'll find more podcasts on our SoundCloud profile.

Cocteau in Soho by Ruth Austin

In this podcast Ruth Austin takes us on a ramble around Soho taking Jean Cocteau’s visit in November 1959 as the starting point.

Cocteau was in London to paint the chapel of Notre Dame de France in Leicester Place and to oversee a performance of Oedipus Rex with his long-time collaborator, Stravinsky.

Ruth Austin is a senior teaching fellow in SELCS, Department of French. She is also co-founder of Cities After Hours which brings together researchers considering the city “after hours” from a variety of disciplinary perspectives @UCLAfterHours.

The great English landscape painter John Constable lived in Hampstead for the last ten years of his life, and painted a series of beautiful skyscapes—pure studies of clouds—on Hampstead Heath.

In this podcast, I talk about his paintings and the way he thought about his art, especially it’s relationship with science, and I visit the main places in Hampstead he is associated with—the Heath, his home in Well Walk, and his tomb in the parish cemetery.

John Hyman is Grote Professor of the Philosophy of Mind and Logic. You can find out more about him here.

This podcast outlines the London experiences of Italian writer and director Lorenza Mazzetti (1928-2020). After a traumatic childhood marked by loss and tragedy, Mazzetti arrived in England in the early 1950s and became a student at the Slade School of Fine Art. During her time at UCL, she made two films - K (1954) and Together (1956) - that contributed to the birth of the Free Cinema movement and to the renovation of British cinema.

Cristina Massaccesi is a Senior Teaching Fellow in SELCS' Department of Italian. Her volume on F.W. Murnau’s Nosferatu. A Symphony of Horror (Liverpool University Press, Devil's Advocates) has been published in 2015. Her new book on hybrid sci-fi and James Cameron’s Aliens (1986) will be published in 2021 as part of Liverpool University Press' series on science fiction classics Constellations.

Getting Started in Latin American London

In this podcast, Dr Niall Geraghty selects five sites within easy reach of the UCL Bloomsbury campus that provide snapshots of Latin American London. By drawing on a range of historical and contemporary references and examples, Niall demonstrates some of the ways in which London maintains a close association with Latin America, while also reflecting on the nature of city space more generally.

The podcasts are designed to accompany your own visits to the sites discussed, but remember, given the rich history of UCL’s wonderful location, the route you choose is just as important as the sites themselves – so get out and explore!

Matthew Beaumont is a Professor of English at UCL and the author of:

• Nightwalking: A Nocturnal History of London
• The Walker: On Finding and Losing Yourself in the Modern City

This podcast leads listeners into the streets of Bloomsbury where it reveals that, in the mid-nineteenth century, Charles Dickens, feeling lost and lonely, roamed the city at night, confronting his personal demons and recording the presence, still of course all too visible in the early twenty-first century, of the poor and the homeless.

The walk will start at UCL, home to the oldest Department of Dutch in the Anglophone world (founded 1919) and host of one of the largest Dutch libraries in the country.

London offers so much to see and do for students beginning their university studies in the city. We've put together a few maps of the city, pin-pointing the arts and humanities highlights on offer. 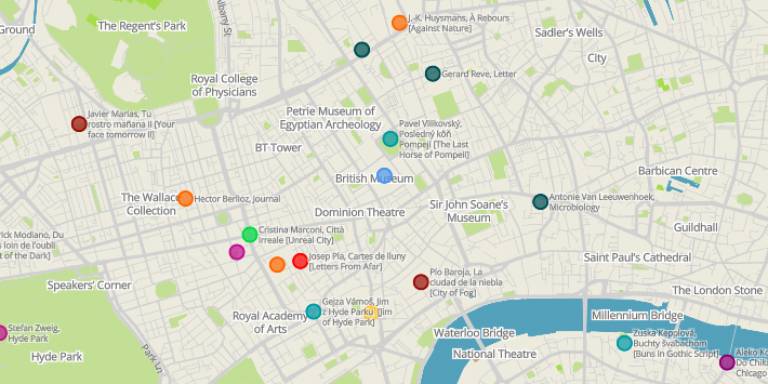 This interactive map acts as a guide to this remarkable city - through the eyes of Europe's literary, musical, artistic and scientific minds. Discover 50 entries in 16 languages describing different sites and experiences of London in text, painting, moving image, or song.

The map has been curated by Dr Uta Staiger of the UCL European Institute, UCL’s hub for research, engagement and collaboration on Europe across the disciplines.

A wide range of colleagues from different departments have contributed to this map, as have many of London’s European National Institutes of Culture - vibrant hubs offering films, exhibitions, libraries, language courses and more, all part of the network EUNIC. Find their websites and more information in each entry.

And - this is a live map. Have a suggestion of your own? Get in touch! 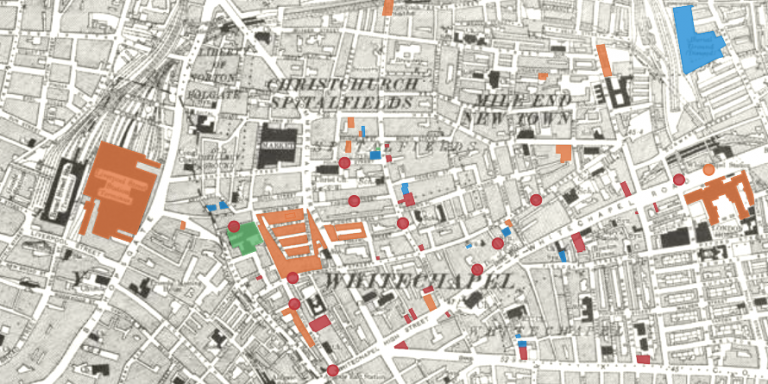 The Memory Map of the Jewish East End is a digital resource where you can explore former sites of Jewish memory in East London.

It aims to create a lasting document of both the history and memory traces of the Jewish East End and attempts to bring the stories and memories of this vanishing landscape to new audiences.

On it you will find interviews, photographs, and essays about more than 70 sites that consistently appear in people's recollections of Jewish East London - include schools and synagogues, street markets and cafes, cinemas and theatres, youth clubs and shops, amongst other places.

The project is a collaboration between the artist and writer Rachel Lichtenstein and Dr Duncan Hay, Prof Laura Vaughan, and Peter Guillery from the Centre for Advanced Spatial Analysis in the Bartlett Faculty of the Built Environment. 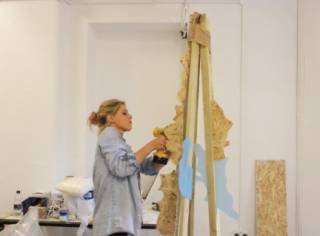 We are incredibly lucky to be located in the centre of London, with access to some of the best galleries and specialist art materials shops in the UK.

To help familiarise yourself with the area, please find below a list of selected galleries, museums, material shops, cafes and book shops to explore near to Slade.

To start with, you could try Slade Sculpture tutor, Holly Hendry’s walking tour of some go-to places in Bloomsbury. This round route will take an hour and a half and takes in a specialist painting materials shop, galleries near by, a book shop and a brilliant independent deli cafe.

Whether you're an accomplished artist joining the Slade, or you're joining another department, you can show off your creative flair through art.

Slade Knowledge bases: Information for all kinds of studio work from all studio areas

Poetry Shed: An on-line resource and forum for creative writing across the School, initiated by Professor Sharon Morris