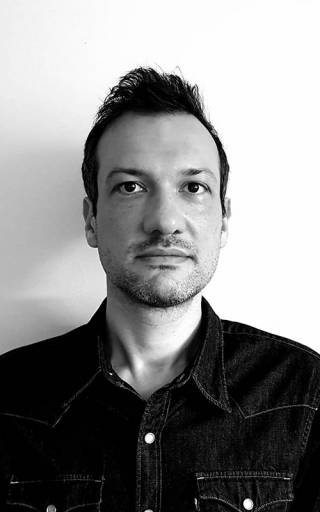 Richard Taws specialises in European visual cultures of the eighteenth and nineteenth centuries, with an emphasis on the period of the French Revolution. He taught previously at McGill University, Canada, and has been a Getty Postdoctoral Fellow, a Member of the School of Historical Studies at the Institute for Advanced Study, Princeton, and a Visiting Fellow at the Bard Graduate Center, New York. In 2012 he was awarded a Philip Leverhulme Prize, and in 2018 a British Academy Mid-Career Fellowship. Richard is the author of The Politics of the Provisional: Art and Ephemera in Revolutionary France (Penn State University Press, 2013), and is co-editor of Time, Media, and Visuality in Post-Revolutionary France (with Iris Moon; Bloomsbury, forthcoming 2020) and Art and Technology in Early Modern Europe (with Genevieve Warwick; Wiley-Blackwell, 2016). As a member of the ‘Multigraph Collective’, he co-authored Interacting with Print: Elements of Reading in the Era of Print Saturation (University of Chicago Press, 2018). Richard is currently completing Time Machines: Art Under the Sign of Telegraphy in Nineteenth-Century France, to be published by the MIT Press.

Reader in the History of Art

18th and 19th-Century French and British visual culture; art and the French Revolution; print culture; history and theory of media and technology

Richard’s recent research has focused on a wide range of everyday, ephemeral, obsolete, or obscured forms of visual and material culture; the social and political stakes of printed images; and histories and theories of science, media, and technology in the eighteenth and nineteenth centuries. Much of his work examines the relation between images and concepts of historical time, and the entanglement of artistic and non-art objects, particularly in the fifty years either side of 1800. His first book, The Politics of the Provisional: Art and Ephemera in Revolutionary France (Penn State University Press, 2013), analysed images and objects made in France in the 1790s that represented conditions of transience, fragility, or incompletion, arguing that questions of material durability were key to understanding the French Revolution’s transformative role in history. The Politics of the Provisional was shortlisted for the R. Gapper Prize of the Society for French Studies, and its publication was supported by the Andrew W. Mellon Foundation and by a Millard Meiss Publication Grant from the College Art Association. A related article, on paper money and post-revolutionary memory, won the 2011 Max Nänny Prize, awarded every three years by the International Association of Word and Image Studies, and has been included by Oxford Art Journal in a 40th anniversary collection of twelve key articles in the journal’s history.

Richard is editor, with Iris Moon, of Time, Media, and Visuality in Post-Revolutionary France (Bloomsbury, forthcoming 2020), and with Genevieve Warwick, of Art and Technology in Early Modern Europe (Wiley-Blackwell, 2016), published first as a special issue of Art History. As a member of the ‘Multigraph Collective’, an interdisciplinary group of media scholars, he recently co-authored Interacting with Print: Elements of Reading in the Era of Print Saturation (University of Chicago Press, 2018). In 2016 he curated, with David Bindman, ‘Revolution Under a King: French Prints, 1789-1792’ and in 2020, with David Bindman and Colin Jones, ‘Witnessing Terror: French Revolutionary Prints, 1792-1794’, both at UCL Art Museum. Richard’s research has been published in journals including The Art Bulletin, Art History, Oxford Art Journal, RES: Anthropology and Aesthetics, Sculpture Journal, Annales historiques de la Révolution française, Cabinet, Perspective, Journal of Visual Culture, and Nonsite, as well as in a number of books and catalogues. A regular reviewer of books and exhibitions, his writing has appeared in Artforum and the London Review of Books, among other places.

Richard is currently completing Time Machines: Art Under the Sign of Telegraphy in Nineteenth-Century France, which traces intersections between art and new communication technologies—notably the optical telegraph system—in France from the Revolution onwards. An edited collection, A Companion to French Art, 1789 to the Present (with Natalie Adamson; Wiley-Blackwell) is also forthcoming. Other work in progress includes essays on nineteenth-century infographics and on printmaker Charles Meryon’s speculative schemes, and a larger project examining the relationship between media and politics in nineteenth-century representations of the French Revolution. An essay derived from this research, on printed and photographic images of royal impostors, received the 2017 Nineteenth-Century Studies Association Article Prize, while an article on the engraving machines and other graphic devices developed by Nicolas-Jacques Conté during Napoleon’s Egyptian campaign was awarded the 2018 James L. Clifford Prize of the American Society for Eighteenth-Century Studies.

Richard completed his PhD at UCL in 2005 and was an Assistant Professor in the Department of Art History and Communication Studies at McGill University, Canada, before returning to London in 2011. He has been a Getty Postdoctoral Fellow, a Member of the School of Historical Studies at the Institute for Advanced Study, Princeton, and a Visiting Fellow at the Bard Graduate Center, New York. He was awarded a Philip Leverhulme Prize in 2012 and in 2018 was the recipient of a British Academy Mid-Career Fellowship. Richard is a member of the editorial board of Art History, and is a collaborator with the Montreal-based Interacting with Print research group.

Richard teaches a variety of courses at both undergraduate and postgraduate levels. Recent MA special subject courses have included ‘Art and Technology in Nineteenth-Century France’, and, for 2019-2020, ‘Time, Media, Revolution: Art and Politics in France, 1789-1871’.

He would welcome enquiries from potential postgraduate students keen to research topics relating to eighteenth and nineteenth-century art and visual culture, politics, media, technology, and aesthetics, or that align in other ways with his research interests. Potential applicants should contact Richard directly to discuss their proposals.

David Mitchell, ‘The Iconography of the Mask: Mimesis and Deception in Ancien-Régime France’ (McGill University, Co-supervisor with Angela Vanhaelen)