Early medieval western Europe developed in the shadow of the classical Roman world. While substantial traces of the organisational power of the Roman Empire can still be seen in Britain, for example the Roman road network and Hadrian's Wall, evidence for power and authority, national, regional and local, in the centuries following the Roman occupation is much more subtle. Despite being harder to define, a varied yet widespread body of evidence exists which has much to reveal about the emergence and development of governmental and judicial structures that ultimately led to those which exist today. Many historians now argue that the ability of powerful families to develop and maintain fora for dispute settlement and the regulation of feud were as influential, if not more so, than their abilities on the battlefield with regard to the formation of kingdoms and ultimately the nation state of England in the early middle ages.

Despite the fundamental importance of arbitration and negotiation being recognised, places where such activities occurred have never been comprehensively studied as archaeological sites, while their names have only been investigated once in the last 80 years by the Scandinavian scholar O. S. Anderson. Assembly sites in the early middle ages can be ranked according to the importance of the gathering concerned. Royal assemblies, known as the witenagemot, formed the precursor to the formal parliament of the later middle ages, while the shires of England each had an assembly where local notables gathered twice a year to engage in local and regional political matters. Towns had their own courts too and these assembled three times per year. At a more local level, England's shires were divided into districts called hundreds (or wapentakes in the area of the Danelaw), each of which possessed its own meeting place where local issues, including judicial trials were enacted. Each hundred had its own name, normally that of its meeting-place. The fundamental importance of these various assemblies is that together they provided a means whereby royal and official prerogative met with local concerns and the lower orders of society.

The hundreds and wapentakes of England

Two particular aspects of meeting places present fascinating yet untapped opportunities for establishing the origins and development of assembly as a means of social organisation and thus hold the keys to the origins of statehood in the English landscape. Place-names indicate varying origins. In some cases the names of pre-Christian gods, including Woden and Thor are to be found in district and assembly site names, while other terms relate to monuments of earlier ages, such as burial mounds and standing stones, which became focal points in the early medieval landscape. Other meeting-places are named after seemingly mundane features such as crossroads, bridges and settlements, while some appear to reflect a communal origin rather than state level imposition with names such as 'barrow of the freemen'. A thorough study of these names has much to reveal.

A second major inroad to understanding such sites can be had through archaeological investigation. Despite the locations of many meeting places being precisely known, only a dozen or so have been investigated by detailed survey and excavation work. By studying assembly sites and their surroundings, much can be learned about their role in relation to other social functions and places. A research project into this largely untapped topic has huge potential to reveal significant insights into the development of early English, and ultimately European society in the post-Roman west. The project will generate scholarly publications, but a major concern is that the approaches and results of the research are widely accessible and usable by all who wish to engage with the subject. To this latter end, the project will produce a comprehensive web-based resource to serve the widest possible range of users, while a downloadable recording pack will facilitate and encourage local studies, in Britain and abroad.

In addition to the national gazetteer, the research project is carrying out the detailed analysis of four selected areas from which to investigate issues of chronological change and local administration: 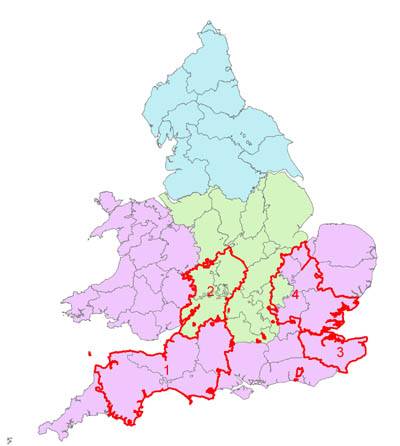