Many early medieval meeting-places can be located and mapped with some precision. In some cases the meeting-place has never been lost, and its existence is recorded in local histories and traditions, or other written sources. The name of the hundred can sometimes provide information regarding its location: hills, trees, rivers, barrows, standing stones, fords, bridges and crossroads are all described by meeting-place names, and these may be positively identified in the landscape.

For a checklist to help you identify the location of the early medieval meeting-places in your area click here.

A standard reporting proforma has been designed in order to record all putative meeting places in a systematic and detailed way. The proforma aims to record the minimum characteristics of sites, and structures observations into a series of text fields. These fields mirror the entries of the electronic gazetteer of sites, so that the completed proforma comprise an additional archive of sites supplementing the digital database.

The layout of the proforma was developed and trialed by the project team. Advice and input has also been sought from a number of volunteer groups who have trialed earlier versions on local sites.

The proforma is broken into two main parts: a desk-based assessment of the site, and a record of field observations. The former aims to document the main written sources for the site, and its location and description. The latter lists a range of observations that can be made at the site itself.

Of particular interest is to document something of the qualities of the site, to address questions regarding the site's accessibility (e.g. whether it was a landmark, or in a relationship with other topographical features), and suitability for public speaking (e.g. is there a raised platform that could act as a soapbox, or a natural bowl which might serve as an auditorium?). The 'sound-shed' of the site is recorded by annotating the shape of the area around the site from which spoken words or bell-ringing can be heard.

Following Aubrey Burl's method, a schematic drawing of the landscape panorama in 360º is also recorded, annotating the horizon, any prominent landmarks and routeway approaches 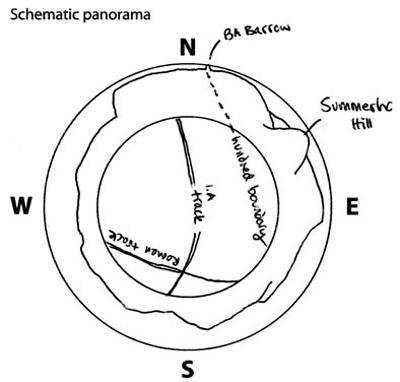 At each site, in addition to the proforma, annotated sketches are made of the site and its topographical features (usually on an OS map), and a number of photographs are taken, both of the site itself, and a 360º panorama of the surrounding landscape.

Go to the guide for completing the proforma

Photography is an important way of documenting and recording sites. Photos of sites can aid in the identification and classification of sites, whilst 360o panoramas taken from the meeting-place help us to contextualise the local topography and lines-of-sight. The project aims to compile a visual gazetteer of all identifiable meeting-places - see our list on our Flickr group LandscapesGovernance (Flickr is a free to use online photo management and sharing application), and we hope also to create an archive of historic images (paintings, lithographs, etchings, etc) of meeting-places.

NW - 360o cylindrical panorama taken from the back of Knowlton Church Henge to the NW of the church. Photographed by Roger Broadie, 7 August 2010

We would like you to share your images of early medieval meeting-places. Contact Stuart to discuss your images or to get advice on formats, permissions and copyright. Photos, photo panoramas, and historic images will form part of the final online archive so it is important that you gain permission to access some sites and to photograph them, and to get copyright!