Almost half of food plants are vegetatively propagated, including four of the ten most economically important species worldwide. Yet we know very little about vegetative crop history - for example, how long they have been cultivated, and where. Ethiopia is potentially Africa's most important centre of crop diversity, characterised by both the evolution and domestication of multiple vegetative species.

This NERC-funded research will specifically focus on the major food security crop enset, or "Ethiopian false banana" (Ensete ventricosum), a tree-like perennial banana relative. Enset supports some of the densest populations in sub-Saharan Africa and is the staple for 20 million people. It is cultivated over a wide elevational range and ecological gradients, exists at very high biomass densities and has a deep cultural association with multiple ethnic groups. As such enset offers an ideal model for studying long-term adaptation, diversification and interaction with culture of a vegetative crop. 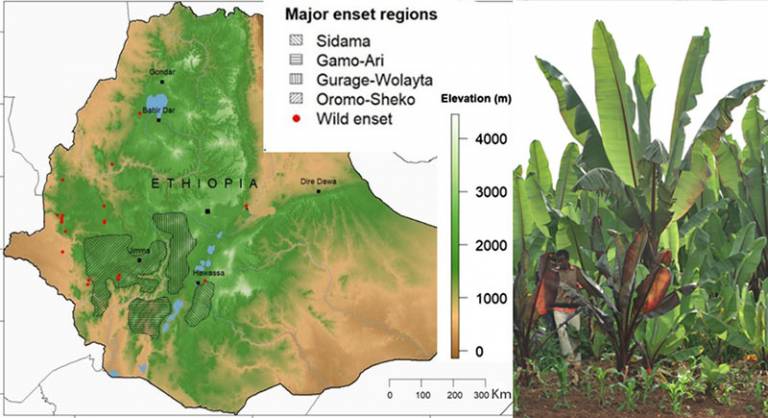 In this project Dorian Fuller, with collaborative partners at Kew, will develop new methods combining phytoliths (silica microfossils) of enset with ethnohistoric, genomic and biogeographical information to reveal the evolutionary history of vegetative agriculture in Ethiopia.

Long-term evidence for enset in agriculture will come from key archaeological sequences, already collected across a series of sites in the Ethiopian Highlands, and being processed by partners in Ethiopia, USA and Germany. But the methods must be refined to interpret these remains by undertaking a comparative study of phytoliths considered against phylogenetic position and potential plasticity due to growth environment. This will be complemented with analysis of charred food remains recovered from macrobotanical assemblages using methods developed at UCL.

At Royal Botanic Gardens, Kew, additional lines of evidence will be developed using herbarium collections, 50-200 years old, to build a dated phylogenetic tree using DNA data from ~ 900 contemporary landraces. These data will provide new hypotheses to explore archaeologically in terms of the cultural and adaptational history of this crop.

Finally, ethnobotanical fieldwork will document present-day diversity across different cultural regions in the southwestern highlands and the extent to which agricultural and cultural changes in recent decades have altered patterns of local landrace diversity. This research addresses key issues at the interface of indigenous agrobiodiversity and its role in future resilience to climate change, through better understanding rates of knowledge and landrace loss, as well as drivers of change. The project will specifically contribute to debates concerning food security and climate change resilience in the Ethiopian highland centre of diversity.