A new study involving UCL Institute of Archaeology researchers indicates that some stained glass windows from Canterbury Cathedral may be among the oldest in the world. 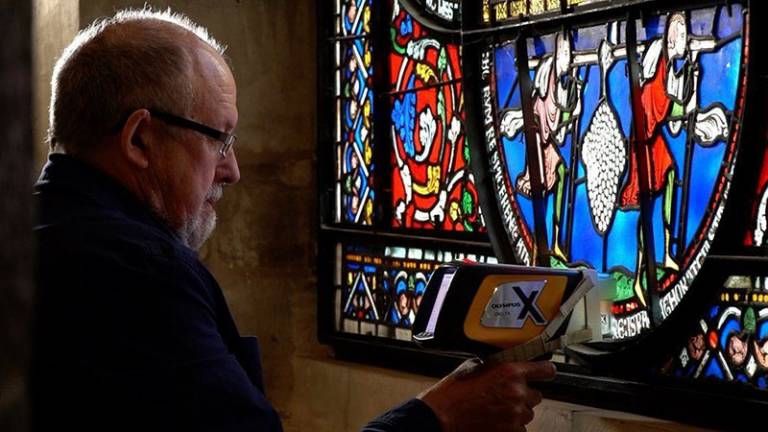 Relatively little is known about stained glass windows in England predating c. 1170. An art-historical evaluation by Prof Madeline Caviness (1987) argued that four figures from the 'Ancestors of Christ series,' depicted over one of the entrances of Canterbury Cathedral, and usually dated to the late 12th and early 13th century, were in fact of earlier date (c. 1130–1160). The windows would therefore have been in place when the Archbishop of Canterbury, Thomas Becket, was killed at the cathedral in 1170 and would be amongst the earliest stained glass in England, and the world.

Building on previous work, Laura Ware Adlington and Ian Freestone at the Institute of Archaeology, together with Léonie Seliger, the Head of Stained Glass Conservation at Canterbury Cathedral, set out to address this hypothesis using a non-destructive technique involving in-situ analysis of the window glass with specially modified pXRF technology.

The results, published recently in Heritage, confirm two major periods of “recycling” or re-using of medieval glass. The first is consistent with Caviness’s argument that figures predating the 1174 fire in the cathedral were re-used in the early 13th century. The results of this new study suggest that in addition to figures, ornamental borders were re-used, indicating the presence of more early glass than previously thought.

“We've been working on it for some time, putting all the pieces in place. And then we finally get an answer something new, that brings together science and art into one story."

In a second period of recycling in the 1790s, surviving figures from the Ancestors series were removed and adapted into rectangular panels for insertion into large perpendicular-style windows elsewhere in the cathedral. The results indicate that the glasses used to adapt the panels to a rectangular shape were broadly contemporary with the glasses used to glaze the original Ancestors windows, again representing a more extensive presence of medieval glass in the windows.