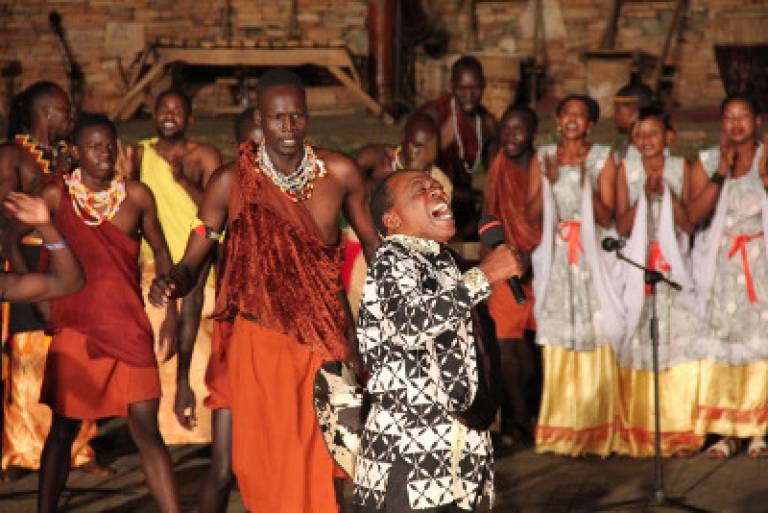 Pauline's winning entry is of the Ndere Troupe; the man with the microphone is Stephen Rwangyezi, who established the troupe in the 1980s partly in order to keep Uganda’s cultures strong among Uganda’s fast-growing, youthful population.

Although its premise is to strengthen tradition, the troupe is simultaneously constructing new versions of the past in a variety of ways. For example, Ndere’s dances are strictly choreographed and the dancers audience facing, when traditionally they would have been freer and in the round; costumes have been created for all dancers for each dance, when the clothes were traditionally improvised and inconsistent between one dancer and the next; and dances from all over the country have been brought together and in some cases adapted to appeal to national and global audiences and politics.

In addition, Rwangyezi claims that some Ugandans, in order to give themselves employment when none else is available – a particular problem now that the population is growing faster than state infrastructure can develop to support it – have been copying Ndere’s dances by recording them on their phones, posing as Ndere dancers, and teaching children in schools and elsewhere constructed ‘traditions’ based on their own interpretations of Ndere’s reinterpretations of dances of the past.

"This picture juxtaposes traditionalism, neo-traditionalism and modernity, all presented by a man in a snazzy modern jacket with a microphone – and in that way I feel that it is representative of my wider research project: Ritual, Identity and Ideology: Constructing the Past in Sub-Saharan Africa."

The London Arts & Humanities Partnership (LAHP) was created in 2014 as an Arts & Humanities Research Council (AHRC)-funded Doctoral Training Partnership between King’s College London, School of Advanced Study (University of London), and University College London, offering a world-class environment for training and research. As part of its renewal of AHRC funding in 2018, the LAHP partnership expanded to eight university partners as well as six core delivery partners.

The LAHP Annual Research Day took place this year on 15 May at the London Southbank Centre with the theme ‘Sovereignty and Interdependence’. This annual event provides the opportunity for LAHP-funded students to think about their research collectively and includes student presentations as well as keynote speakers.