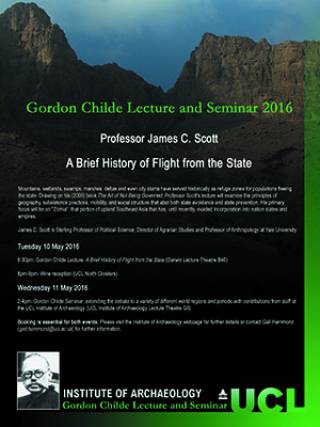 Thanks to a generous donation the UCL Institute of Archaeology hosted its first Gordon Childe Lecture and Seminar (previously known as the Annual Lecture) in 2016.

Mountains, wetlands, swamps, marshes, deltas and even city slums have served historically as refuge zones for populations fleeing the state. Drawing on his (2009) book The Art of Not Being Governed, Professor Scott’s lecture will examine the principles of geography, subsistence practices, mobility, and social structure that abet both state avoidance and state prevention. His primary focus will be on “Zomia”: that portion of upland Southeast Asia that has, until recently, evaded incorporation into nation states and empires. But the designation “Zomia” could be metaphorically extended to other areas of the world that have become zones of state evasion. Furthermore, a history of flight from the state raises new questions about the earliest agrarian states in the Mesopotamian alluvium. To what degree did infectious diseases, captured labor, and taxes on variable grain harvests provoke state evasion and flight, as far back as the history of the state itself? How might a focus on state evasion change our understanding of later prehistory, as well as more recent periods?

These wider topics will be presented for the first time in Professor Scott’s Gordon Childe Lecture, and then explored through an advanced Seminar (to be held the following day) with contributions from staff at the UCL Institute of Archaeology, extending the debate to a variety of different world regions and periods.