From skull measurements to ancient DNA: John Thurnam's collection of antiquities in their prehistoric and archaeological context 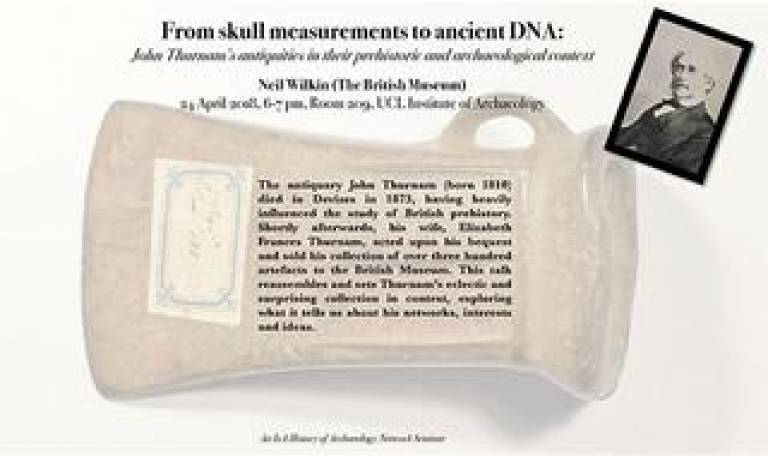 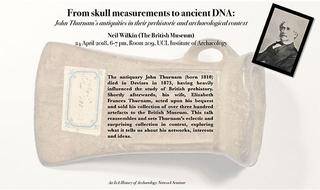 Neil Wilkin (The British Museum) will give a seminar organised by the History of Archaeology Research Network at the UCL Institute of Archaeology on 24 April.

The antiquary John Thurnam (born 1810) died in Devizes in 1873, having heavily influenced the study of British prehistory. Shortly afterwards, his wife, Elizabeth Frances Thurnam, acted upon his bequest and sold his collection of over three hundred artefacts to the British Museum. This talk reassembles and sets Thurnam's eclectic and surprising collection in context, exploring what it tells us about his networks, interests and ideas.

Thurnam certainly made important contributions to the study of material culture, however, as a medical doctor and the Medical Superintendent of Wiltshire County Asylum, he was better known for the study and collection of human remains (or 'bone hunting'). His interest in detailed cranial measurements led to influential arguments about changes in the identity and 'race' of British populations between the Neolithic and Bronze Age periods. Those ideas have recently come back to the fore as a result of new ancient DNA studies. The second part of this talk considers what Thurnam's life and legacy tells us about the current debate surrounding the relationship between ancient DNA and culture, its problems and pitfalls.